Kawah Buku > History > Malaysia > A History of Perak
Out of stock 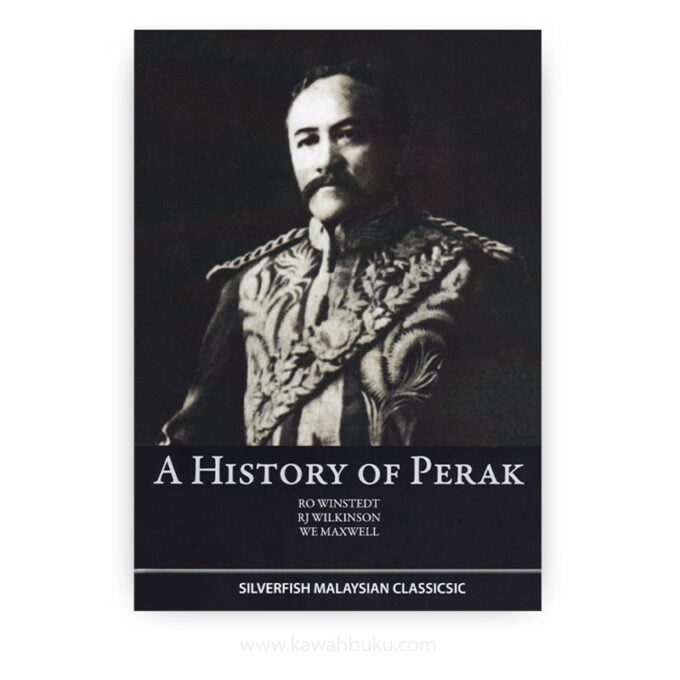 A History of Perak

W.E. MAXWELL (b. 1846 – d. 1897) was a British colonial official who served as Colonial Secretary of the Straits Settlements and Governor of the Gold Coast, then a British colony.

A History of Perak provide scaffolding for a definitive history of Malaya, especially for the Nothern state Perak based on the Malay material collected by the authors in Perak a quarter of a century ago. Since that time many Portuguese, Dutch and English records have been made accessible. On the stage oř Perak’s modem history, there have been many actors: the Malays, the Portuguese, the Achinese, the Dutch, the Bugis from Riau and Selangor, Siam and her vassal Kedah, and the British. To some small degree, it was dynastic pride that made Acheh and the Bugis her aggressors, and Siam had hardly any other conscious motive. But at the back of all Perak history has been trade. Trade alone attracted the Europeans, an unassuagable thirst for the purchase of tin and the sale of cloth.

From her foundation down to the time of British protection, Perak suffered every sort of humiliation and defeat and domestic tragedy. The Portuguese built a fort at the mouth of her river in order to command a monopoly of her tin. Jealous of her dealings with the Portuguese, Acheh attacked Perak fifty years after the coming of her Malacca dynasty. It removed five thousand of her subjects and carried ruler after ruler into captivity, until royal descent on the male side was broken. It made treaties directly with the Dutch for the disposal of Perak’s tin, and it sent Achinese officials to control the weighing station at her estuary.

For nearly a century the State was the vassal of Acheh. Moreover, during half that century Perak was also plagued by the Dutch, who demanded her tin at a price concerted with Acheh, deducted a war indemnity from that price, erected a fort at the Dindings and blockaded the river-mouth. Long before the Dutch had gone, Perak was implicated in the Kedah wars between the Bugis and the Minangkabau followers of the famous Raja Kechil of Siak. The Bugis invaded her in 1728 and in 1742, later compelled her ruler to instal a Bugis chief as Sultan of Selangor and then sent their most notable warrior, Raja Haji, to obtain the hand of a Perak princess for the new potentate.

From 1804 till 1806 Perak was “by right of powder and ball” subject to Selangor. In 1818 she was conquered by Kedah at the dictates of Siam. In 1822 she turned to Selangor to expel the Siamese, who three years later re-established their suzerainty. Down to 1826 when the British intervened, Perak was no more than a shuttle-cock between Selangor and Siam. In truth, she was always a shuttlecock: between Portugal and Acheh, between Acheh and the Dutch, between Minangkabaus and Bugis, between Selangor and Siam. And after the Kedah wars at the beginning of the eighteenth century, nearly every decade of her history was disfigured by fratricidal struggles between princes of her own royal house.

The most bigoted Little Englander, the most convinced supporter of the rights and customs of small people, must admire the pax Britannica in Perak and bless the work of British protection in bringing out of centuries of great tribulation this rich and beautiful country and her ancient line. Beset by Selangor, threatened by Siam, Sultan ‘Abdu’l-Malik Mansur Shah could yet write with truth in 1816, “I am the oldest of all the kings of these parts, such as the kings of Siak, Selangor, Riau, Kedah and Trengganu. I will not send tribute of Golden Flowers to Siam.”

I. Early Civilisations and Primitive Tribes

II. The Coming of the Malays

IV. Perak under the Achinese

V. The Dutch and Perak

VII. The Chinese Miners of Larut