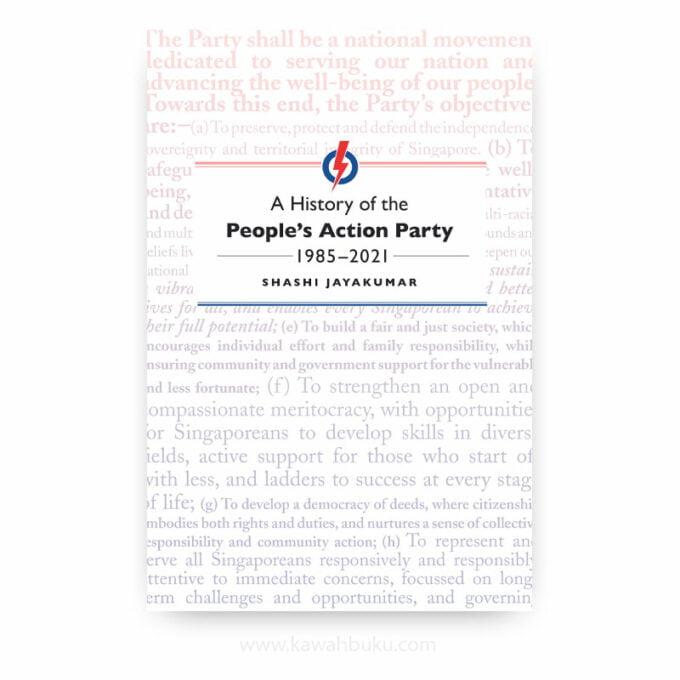 A History of the People’s Action Party, 1985-2021 provides a detailed portrait of a robust political institution and establishes a distinctive new narrative of Singapore politics, drawing on internal party documents and multiple interviews with key leaders over a 10-year period. The People’s Action Party (or PAP) of Singapore is among the longest-ruling democratically-elected political parties in the world, in power continuously since Singapore gained self-rule in 1959. Such longevity is the hallmark of an institution that is itself dynamic and responsive. But remarkably, the story of the party as an institution has not received the sustained study it deserves, from historians or political scientists.

This narrative history of the PAP follows the decisions made by party leaders as they have sought to respond to the changing demands and expectations of the Singapore electorate, over a 36-year period that saw Singapore enter the ranks of developed nations. It is fully up to date with the Party’s response to their loss of seats in the 2020 General Elections, and changes in party leadership succession announced in April 2021. Leadership renewal is one of four dimensions of change in the party that are the book’s focus: the others being the party’s communications methods and styles, the mechanisms developed for managing institutional change, and the evolution of economic and social policy.

The present book begins with the aftermath of the 1984 general election. This election saw the PAP suffer a 12.9 per cent vote swing against it. The week or so between the election result and the announcement of the new Cabinet (with Goh Chok Tong chosen as first deputy prime minister, in effect the political successor to Lee Kuan Yew) was to shape the nation’s history. Given the period’s significance, the author has chosen to begin the narrative from this point.

Although the book uses a broadly chronological treatment, certain thematic areas are covered—and analysed—within the chronological umbrella. These include, for example, Party recruitment selection; the PAP’s unending—indeed existential—search for talent; Party organs and reorganisations that occurred from time to time; and the individuals who were part of this apparatus. Also covered are the various PAP organs (including the PAP Central Executive Committee, Party branches, Young PAP and the Women’s Wing) and the PAP’s relationship to parapolitical bodies such as grassroots organisations.

There are, of course, various themes and topics that are recurrent and evolving, and which necessarily feature across chapters. These include, for example, the PAP’s view and treatment of the Opposition, as well as the painstaking internal preparations for elections (and the rigorous post-mortems that invariably follow). Given that the PAP has governed Singapore without interruption from 1959, it has been necessary to give also a sense of not just the Party in government, but the PAP as government. At various points, the text examines critical issues of policy (economic development, housing, transport, cost of living) as well as matters relating to the sociopolitical backdrop (including the government’s evolving relationship with the people and civil society, and challenges to governance posed by social media).

The PAP’s seeing itself as much more than an “ordinary” political party—as a national institution, or perhaps even as the only institution with the credentials to take the country forward—is an issue inextricably linked with the very longevity of the Party itself. The author has avoided attempting to provide one single set of definitive answers as to why the Party has consistently won the people’s mandate at each election from 1959. However, several themes suggest themselves. Some of these build on observations from PAP leaders. Not generally prone to excesses of nostalgic reflections, key individuals within the Party could on important occasions—such as significant anniversaries—look back on the past and comment with some perspicacity on why the PAP remained in power.

In 1979, on the occasion of the 25th anniversary of the Party, Lee Kuan Yew, secretary-general of the Party, reflected on this issue and on what lessons the PAP had learnt from some 20 years in government. The principles he laid out automatically suggest themselves to a reader with even a passing appreciation of the PAP’s history. One theme Lee highlighted included staying clean. The PAP’s ruthless insistence on an untainted and corruption-free government—indeed a clean Singapore—is well known, and some examples of this are given in the chapters that follow. Lee also touched on the PAP’s consistent policymaking; in securing the long-term interests of the people, the PAP rejected soft options and did not court popularity.

The second generation of leaders saw the PAP’s durability in largely similar terms. In 2004, on the occasion of the 50th anniversary of the Party, PAP chairman Dr Tony Tan put forward three fundamental principles for the PAP s dominance and longevity. These were honesty, incorruptibility and competence in government; an orderly system of renewal, and trust and identification of the Party with the needs, hopes and aspirations of the people.