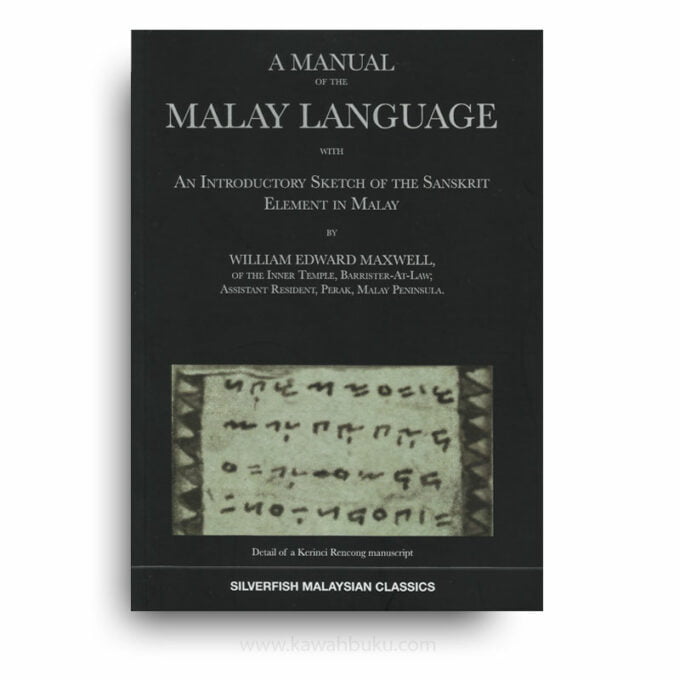 WILLIAM EDWARD MAXWELL (b. 1846 – d. 1897) was a British colonial official who served as Colonial Secretary of the Straits Settlements and Governor of the Gold Coast, then a British colony.

A Manual of the Malay Language with an Introductory Sketch of the Sanskrit Element in Malay not only a history of the Malay language but a comprehensive step-by-step guide on learning the tongue in 40 lessons from the very basic to an intermediate level, with a vocabulary list of well over 3000 words. It will be useful to anyone who wants to learn to speak Malay in a short period. The author uses the old spelling system. Example, a mouse deer will be spelt “kanchil” (and pronounced as it’s spelt), whereas the new spelling is “kancil” which would leave many visitors wondering if it should rhyme with “cancel“. However, if one is interested in reading or writing Malay, one would need a tutor.

The interest of Englishmen in the Malay language began with the early ventures of the East India Company in the Far East, in the first years of the seventeenth century. It was the language of commerce everywhere east of the Bay of Bengal, and our earliest adventurers found it spoken at the trading ports which they visited. The Portuguese had preceded them by a century, and the Dutch had been a little earlier in the same field. The British seem to have been indebted to the latter for their first Malay vocabulary. The minutes of the East India Company record how, on the 22d January 1614, “a book of dialogues, heretofore translated into Latin by the Hollanders, and printed with the Malacca tongue, Mr. Hakluyt having now turned the Latin into English, and supposed very fit for the factors to learn, was ordered to be printed before the departure of the ships.”

At present, the use of Malay, as far as Englishmen are concerned, is chiefly confined to the officers of the Colonial Government in the British possessions in the Straits of Malacca and in the native states adjoining them, and to other residents in those parts, and in the Dutch settlements in the East. To these may be added the English communities of Labuan and Sarawak, and merchants, traders, and seamen all over the Eastern Archipelago. The limited extent of their Malay possessions, when they are compared with the magnificent islands which make up Netherlands India, excuse them, no doubt, for the secondary place which they occupy in all researches connected with the language and literature of the Malays.

Malay is the language not of a nation, but of tribes and communities widely scattered in the East, and is probably spoken with the greatest purity in the states of Kedah and Perak, on the west coast of the Malay Peninsula. It is spoken in all the states of the Peninsula, in Sumatra, Sunda, Java, Borneo, Celebes, Flores, Timor, and Timor Laut, the Moluccas, and the Philippines. Traces of it are found among the numerous Polynesian dialects, and in the language of the islanders of Formosa. Siam proper has a large Malay population, descendants mainly of captives taken in war, and the language is therefore in use there in places; it is found also here and there on the coasts and rivers of Anam and Cochin-China. No other language of the Eastern Archipelago is understood over such an extensive area, and it is the common means of communication between the numerous tribes and races of the Malay family whose languages and dialects differ.