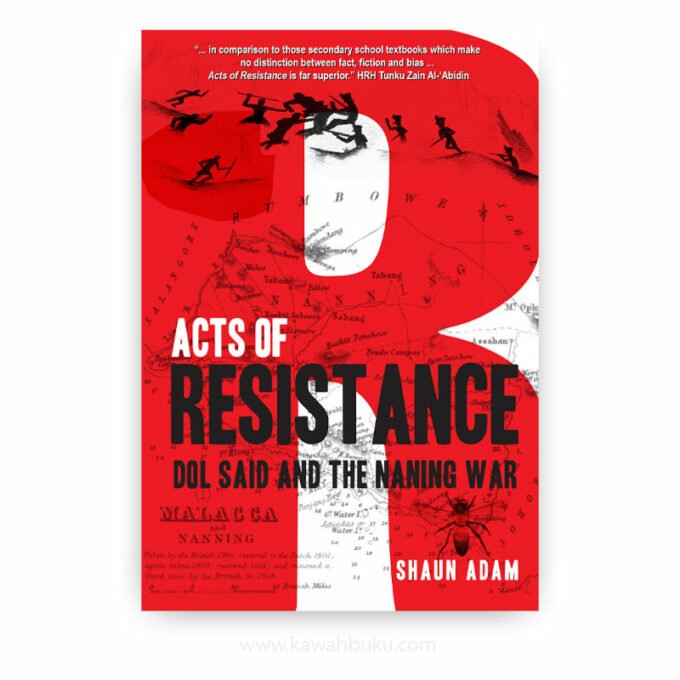 Acts of Resistance: Dol Said and the Naning War

SHAUN ADAM is an independent scholar, who build a career in the field of international socio-economic development. He held official positions representing the interest of the Malaysian government and working with the United Nations in Geneva.

Acts of Resistance: Dol Said and the Naning War chronicles the contemporary district of Naning’s incredibly valiant resistance to foreign subjugation, focusing on the British War of 1831-2. The epic begins with the Portuguese conquest of Melaka half a millennium ago, continuing through to the Japanese Occupation during the Second World War less than a century ago. The story of Dol Said and Naning took place in a complex geopolitical context, shrouded in elements of controversy, mysticism, betrayal and a local sense of justice.

Even mounted on two wheels, each bigger than a man, the British six-pounder field gun still needed to be hoisted by five Sepoy soldiers to the front of the line at Kelemak. These Sepoys—professional Indian infantrymen—had some experience traversing thick tropical jungles, but the muddy terrain which they now found themselves in felt alien. Far away from home, employed by the British East India Company to wage war in the hinterlands outside the settlement of Malacca, they were surrounded by tall trees and various shrubs which could easily hide a nearby enemy. The warnings given by the Malaccans to the soldiers took on more weight; that the warriors of Naning, armed with a few tarkul and spears, could suddenly appear unannounced.

In this climate, a heightened sense of fear took root among the Sepoys, whose only comfort were their muskets, bayonets and cannons. However, the weight of their weapons drastically slowed down their progress while depleting the rations meant to last the journey from Malacca to the outskirts of Naning. Furthermore, the buffalo that were used to carry their armaments and cannons frequently got stuck in the muddy route, adding to the delays of the expeditionary force.

Now, these tanned, weary men took their positions on the orders of Captain Wyllie, when the sight of three strangely dressed men approaching them put the Sepoys on guard. A gunner tasked with manning the six-pounder took aim at the three individuals. He would not have known that the leader of the approaching men was the Panglima Dato, the Hulubalang of Naning, dressed in traditional battle armour and armed with a magnificent spear. Neither he nor his companions looked ready for battle. They seemed better dressed for the court than the battlefield, which might have signalled an alternative intention. Perhaps this revered war leader from Dol Said’s ranks had no intention of fighting. Calm even in the face of the trained soldiers ahead of them, they slowly made their way forward.

Before the Hulubalang could get close enough to present himself, the order was given. The gunner fired grapeshot from the six-pounder, ending the life of this high emissary before he could initiate any form of discussion.” The customary practise of sending a member from the top ranks to meet the enemy for a final exchange prior to the battle was cut short. This had been regarded as a form of professional courtesy and goodwill aimed at exploring peaceable options, even though the possibility of obtaining a truce was remote. But any possibilities that might prevent bloodshed could not be ignored.

In light of the killing, the leader of Naning, Penghulu Abdul Said bin Omar—better known as Dol Said—would now have to give up hope of diplomatic measures. Captain Wyllie and his associates had long made their decision, formulated over a period of two years along a chain of command stretching first to India and then to London. The Hulubalang was the first casualty of what would become known as the Naning War, and the latest test of Nanings legendary history of resistance.

CHAPTER 1 A history of resistance

CHAPTER 2 Explorers from the West

CHAPTER 4 A Chinese merchant, the ‘Duku Incident’ and other preludes

CHAPTER 5 ‘Every scrap taken by the upcountry people’

CHAPTER 7 ‘The early doom of the brave and fair’

CHAPTER 8 Into the realm of the unreal

Acknowledgements
About the Author
Selected references