Kawah Buku > History > Malaysia > Baling: From Demonstration to Industrialisation (A Collection of Essays in Time Geography) 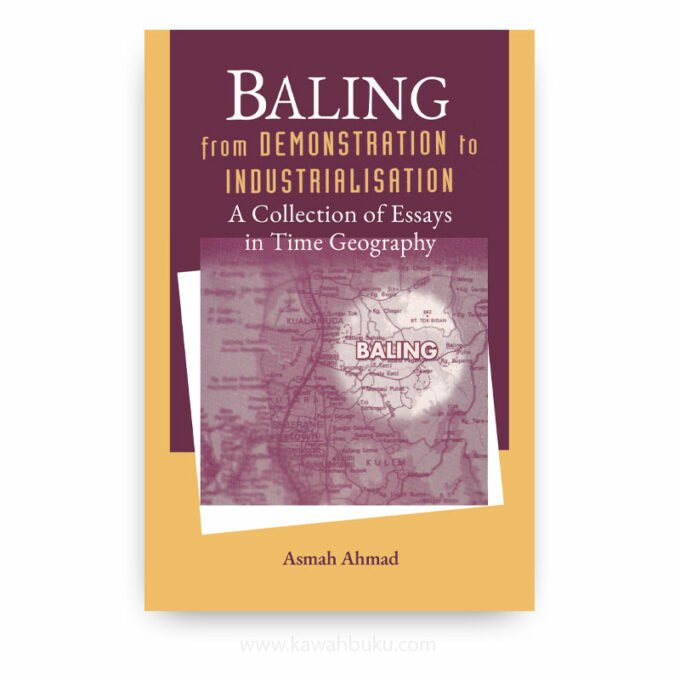 Baling: From Demonstration to Industrialisation (A Collection of Essays in Time Geography)

DISCLAIMER: This item is in NOS, or “new old stock” condition. It means some copies might show visible weary defects such as stained, foxed, chipped, bowed, fading, et cetera. We strongly advise the customer to view the additional photos provided to get a clear impression of the book’s condition before making purchases.

Baling: From Demonstration to Industrialisation (A Collection of Essays in Time Geography) is reconstituted regional geography in which human activity quite literally takes place, and in which place itself becomes a process by conceiving human activity in a region as a continuous discourse rooted in a staggering series of shared material situations that constantly arise out of one another in a dialectically linked distribution of opportunity and constraint. Baling is a place located in the northern frontier of Peninsular Malaysia. Most Malaysians know where it is. Baling is remembered for shaping a part of Malaysia’s post-Independence history. The place is synonymous with the popular, grassroots uprising, something one does not expect for a well-governed, sedate Malaysia. This is the place where hungry and angry smallholders and their compatriots staged the “Hunger March” in December 1974. They were among the 70 per cent or more of the poor in the district who wanted to tell the world that they had had enough of being squeezed between rising costs of living and slumping rubber prices. There was virtually no development. That was Baling in Time Frame One.

Things changed thereafter although only slowly. By 1988, the smallholder poverty level slipped a little to around 70 per cent. That was still an unpleasant figure but there was more access to basic amenities like electricity, clean water and tarred local roads. Development had been initiated. That was Baling in Time Frame Two. The pace of change quickened thereafter. By 1994, the smallholder poverty level slumped to around 45 per cent. That dramatic nearly thirty per cent drop signified the fruition of replanted rubber holdings and other development projects with long gestation, which were embarked upon since the mid-Eighties. Development had been delivered. This was made for Baling in Time Frame Three. Three contrasting phases of a place’s life and time—Baling before, during and after development. This is how Baling became an inviting exercise in time-geography for the author.

Time-geography is an approach to a contextual theory originally developed by the Swedish geographer Torsten Hägerstrand and his associates at the University of Lund (the Lund School), which conceives of time and space as providers of “room” for collateral processes. The latter term is of fundamental importance implying that time geography emphasizes the continuity and connectedness of sequences of events which necessarily take place in situations bounded in time and space, and the outcomes of which are thereby mutually modified by their common localization. The author’s Baling treatment, however, seeks to depart from the usual time-geography’s illustrative and confined to the small-scale, short-term and essentially individual level. Rather it seeks to include greater regard for the changing larger political-economy structures that have shaped Baling since then. So, what this book presents is more of a Baling “choreography of existence” to borrow from Pred (1977) where the chapters register the significance of flows and encounters in Baling’s socio-economic space for the subsequent constitution and construction of its life reality.

In other words, the author was doing a contextualized time-geography with Baling. The ten chapters provide varying contexts to understand the time-space settings and sequences of human activity of, and in, Baling which essentially were and are its own constitution. The Baling contextual explanations thus depend upon identifying relations of coexistence, connection or ‘togetherness’ there, which I did mainly through the life and time of its rubber smallholders. The chapters thus represent an attempt to recapture the flow of human agency as a series of situated events in Baling’s time-space continuum, or rather prisms, of existence. The author has approached Baling as a “pocket” of the world as it is found, with its mixed assortment of beings, in contrast to other approaches which may remove the Baling folks from their habitats and place them in a theoretical or speculative abstraction. This is how the author feels, that a contextual approach serves the cause of modern geography. For, as Hagerstrand (1974) puts it, “Being a geographer basically means to appreciate that when events are seen located together in a block of space-time they inevitably expose relations which cannot be traced any more, once we have bunched them into classes and drawn them out of their place in the block”.