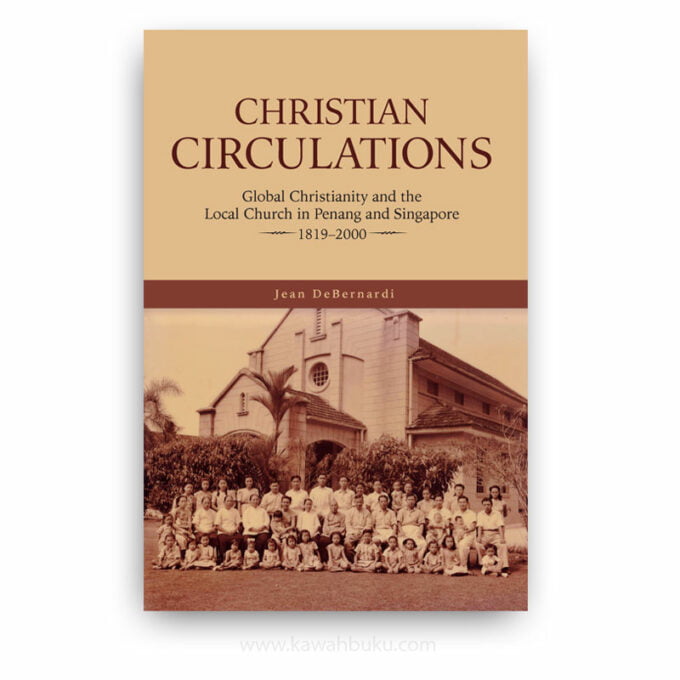 Christian Circulations: Global Christianity and the Local Church in Penang and Singapore, 1819-2000

JEAN DEBERNARDI is a professor of anthropology at the University of Alberta who has done extensive ethnographic and archival research focusing on Singapore, Penang, and two UNESCO World Heritage sites in China, Wudang Mountain, a popular pilgrimage site for Southeast Asian Daoists, and Wuyi Mountain, a famous tea-growing area in Northern Fujian.

Christian Circulations: Global Christianity and the Local Church in Penang and Singapore, 1819-2000 is a study of the transregional history of the Brethren movement and its emplacement in Singapore and Malaysia but is also a history of discontinuous continuities that have shaped the modern field of religious practice in China and Southeast Asia. In postcolonial Singapore and Malaysia, Pentecostal megachurches dominate the Christian landscape, but the “big four” Protestant churches—Anglican, Methodist, Presbyterian, and Brethren—remain religions of heritage for many. Sixty Malaysian and nineteen Singaporean assemblies identify themselves as Christian Brethren, and most trace their roots to independent local churches formed in Penang and Singapore in the 1860s. After World War II, the Brethren promoted new forms of evangelical practice, and former Brethren elders founded independent churches, from charismatic local churches to Pentecostal megachurches.

In the 1820s, a small group of Irish and British Christians separated from national churches and dissenting denominations, wanting to be known only as Christians. They sought to restore the practices of the primitive first-century church and saw evidence of the workings of the Holy Spirit in experiences that they described as Pentecostal. They called themselves undenominational evangelical Christians, and widely circulated people, texts, ideas, and donations, creating a religion that combined local churches with global networks.

Their first missionaries went to Penang in 1859 at the height of a revival that passed from North America to Britain to Asia. By the end of the 19th century, the Brethren movement had spread by migration to Canada, Australia, New Zealand, and the United States and supported missionaries in Europe, Africa, India, Asia, and the Americas. With no vestments, few ritual laws, no scripted liturgies, or ordained ministers, the Brethren network soon included indigenous evangelists throughout the world.

In England and Ireland, support for the Brethren movement surged after mass revivals that emphasized tears and repentance. After reading about revival events in England and Ireland in The Missionary Reporter, Tamil evangelist John Christian Arulappan reported that his followers were having vivid dreams and confessing their sins with tears and trembling. George Miiller published Arulappans letter in his 1859-60 annual report, claiming that it showed “in what a striking way the Holy Spirit is now beginning to work in India also, as well as in Ireland and other countries”. In the same report, he announced that “a brother in the Lord and two sisters went out from our mids for missionary service, to labour in Penang, Straits of Malacca”?

Contact with the Open Brethren helped spark what has now described a the first indigenous Pentecostal revival in India (Anderson 2013: 165; Dano 2004). But in the postcolonial era, Brethren elders challenged the genuineness of charismatic practices like speaking in tongues and spiritual healing. They lost members to new Pentecostal churches, including some founded by their former elders. Although one Singapore Brethren assembly website describes their form of Christianity as “truly charismatic”, many label them as conservative Bible fundamentalists, out of step with the 21st century.

Because the Brethren have been eclipsed by the global growth of Pentecostalism, and because denominational Christians viewed them as sectarian, their historical impacts have been underestimated. But in the 19th century, the Brethren took their radical movement beyond Britain’s national boundaries, using technological advancements in print media, travel, and communications as tools to create a global parish. John Nelson Darby made repeated trips to the United States and Canada between 1862 and 1877, where he spread his theological system and influenced the development of fundamentalist Christianity. Starting in 1875, Open Brethren leader George Miiller and his second wife embarked on 17 years of global travel, including a world tour from 1885-87, during which he lectured in Singapore, Penang, China, and Ceylon.

During the colonial period, Brethren missionaries and Chinese evangelists also traveled widely, visiting indigenous churches that existed independent of European missionaries or Protestant denominations. In Southeast Asia, most of these churches were formed by Chinese immigrants from Fujian Province and their descendants. But when historians ask how Christianity became indigenized in China, they rarely mention the Brethren or the independent Chinese churches of Java, Borneo, and Southern Thailand.

Conclusion: The Brethren Movement and its Modern Fate