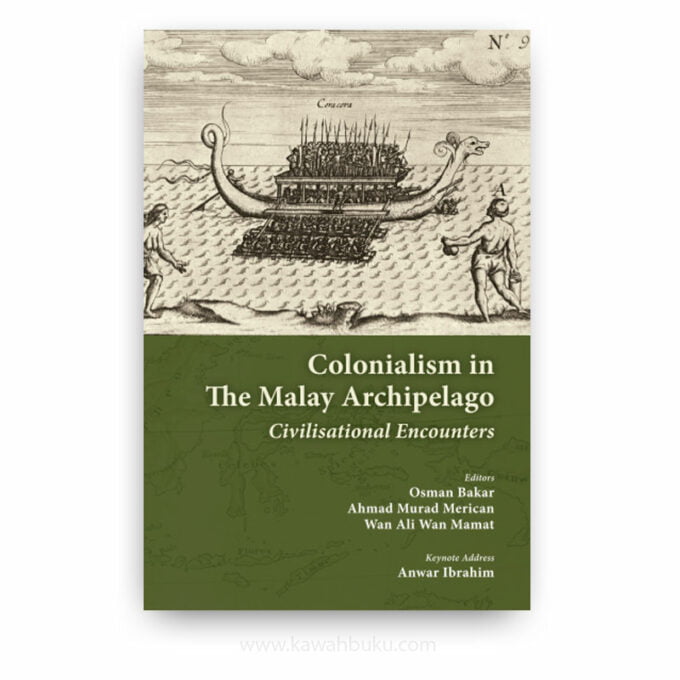 With a keynote address by ANWAR IBRAHIM

Colonialism in the Malay Archipelago: Civilisational Encounters provide a collective treatment of the theme of colonialism in the Malay Archipelago from the as yet little explored perspective of civilizational encounters through fourteen leading scholars and intellectual-activists. The centuries-long Western colonial presence in the Archipelago had generated both peaceful and violent encounters that were to prove consequential on the civilizational history of the region. The book’s chapters attempt to present new insights into the nature and multidimensional character of these civilizational encounters and their significance for the life and thought of the contemporary Malay Archipelago that now comprises the modern nation-states of Brunei Darussalam, Indonesia, Malaysia, the Philippines, Singapore, and Timor-Leste.

The period of this volume, extending from the beginning of the sixteenth century until the second half of the twentieth century that spans more than four centuries is identified with the Western colonisation of the Malay Archipelago. This colonial period in the Archipelago reveals many different facets and dimensions of the colonial encounters between the major Western powers and the indigenous socio-political orders. These encounters were civilisational in nature and scope in the sense that is to be explained shortly. The core issues that characterise these encounters were economic and political in nature, which is not surprising since the main civilisational motive of the coming of Western powers to the Archipelago and the rest of the colonised world was to create a new global economic-political order in the light of their newly found idea of civilisation.

The new idea of civilisation was of modern European origin, although in a number of respects there was continuity between the European idea and the Islamic one that preceded it. No doubt, this is an important subject, especially from the point of view of the history of civilisational relations between the West and Islam, but it is only beginning to be explored. But this Introduction is not the place to go into a detailed discussion of the subject. Suffice to say that the continuity in question is best illustrated by the fact that the first flag bearers of the new civilisational order were Portugal and Spain, both of which had just liberated themselves from Islamic rule but had inherited from it many things that proved to be very useful to their new civilisational agenda.

The new civilisational order was best summed up by historians as the three Gs referring respectively to Gold, God, and Glory. In the newly born civilisation that could only be described as “worldly” in spirit, notwithstanding the visible role of the Church, gold came to symbolise material wealth that was to be gained through economic monopoly. In the Americas, the wealth for colonial grab was literally gold, but in the Archipelago, it was spice, which has been described by some contemporary writers as the oil of the time. God, the second in the triad, refers to the militant crusading and missionary traditions of Christianity, characterised in part by rivalry with Islam as manifested, for example, in the Archipelago and Africa and hatred of non-Christian religions as encountered, for example, by the indigenous religions in the Americas.

This particular dimension of the new civilisational order may then be described as religious exclusivism of the militant type. It has been widely criticised as largely an expression of political Christianity in the service of colonialism. And Glory, the third in the triad, refers to political nationalism that inspired the fierce competition between European nation-states for overseas territories and economic wealth in the names of their respective Kings or Queens. Thus, the modern European civilisation was originally founded on three pillars: wealth monopoly, religious exclusivism, and political nationalism.

These three doctrines, which symbolise the three Gs, essentially explained the civilisational behaviour of the European powers. Portugal and Spain were the first European powers to put these doctrines into concrete practical shape, and they also happened to be the first Europeans to come to the Archipelago with a colonial agenda that was guided by the three Gs. The natives saw with their own eyes the three Gs in action. The coming of the Portuguese and the Spaniards heralded the new age of globalisation of the colonial economy, resulting in the globalisation of agricultural goods and more importantly the globalisation of people that significantly changed the face of the whole region.

Later on, the Archipelago also saw the coming of Western ideas like secularism, modernism, nationalism and the nation-state, capitalism, communism, and modern science and technology. Their impact on the life and thought of the Malay people was profound. Western colonialism had impacted the development of civilisation in the Malay Archipelago in numerous ways. Sad to say, this important period of the region’s history is little known to many people today both in the Orient and in the Occident. It is only proper that the younger generations are encouraged to better understand the civilisational consequences of colonialism in the Archipelago, which shared many traits with the experiences of colonialism in other parts of the world.

INTRODUCTION — The Civilisational History of the Malay Archipelago: Arguing for a New Narrative

EUROPEANS IN THE MALAY ARCHIPELAGO
1. Portugall’s Conquest of Malacca and Spice Monopoly: Manueline Imperial Policy as the Motivating Factor
2. Representations of Colonialism: The Coming of Europeans to the Malay Archipelago
3. Banda Islands and the Treaty of Breda 1667
4. The Invention of the Bornean Pirate: The Nineteenth Century ‘War on Piracy’ as Pretext for Colonial Intervention

THE IMPACT OF COLONIALISM ON PUBLIC POLICY, CULTURE, AND IDENTITY
10. Colonisation and the Growth of the Riba Industry in Colonial Malaya
11. Connectivity and Constructivism: Islam, Colonial History and Malaysia’s Foreign Policy
12. The Crisis of Identity: The Impact of Colonialism and Postcolonialism with Special Reference to Language and Education in Malaysia
13. Colonial Myth of the Lazy Native: Postcolonial Answers from History and Literature