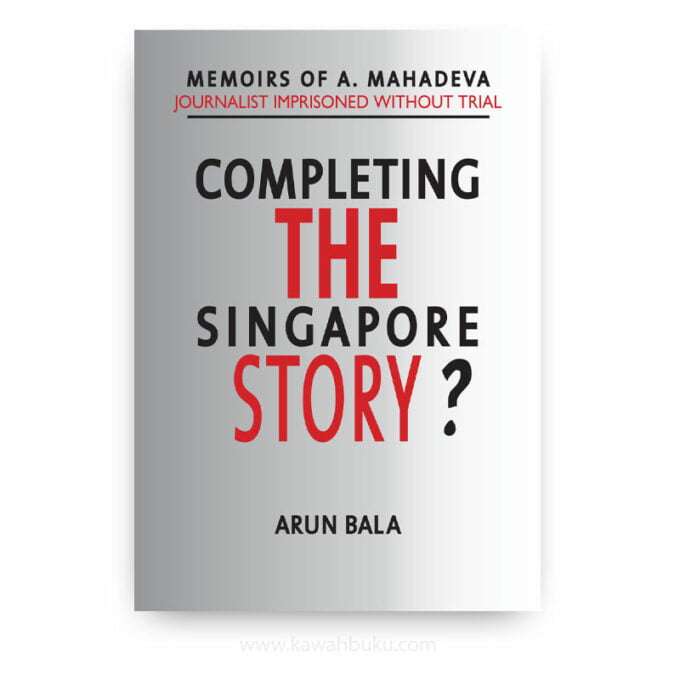 Completing the Singapore Story?: Memoirs of A. Mahadeva, Journalist Imprisoned without Trial

Completing the Singapore Story?: Memoirs of A. Mahadeva, Journalist Imprisoned without Trial not only chart Mahadeva’s life and beliefs, but also question the orthodox Singapore Story that now conveniently frames and justifies his and his cohort’s imprisonment without trial—some for as long as nearly two to three decades. Mahadeva, the founding secretary-general of the Singapore National Union of Journalists (SNUJ), suddenly found himself in the news when he was arrested in 1963 under Operation Coldstore. This is his story, told posthumously by one of his brothers, who delved into the rich collection of Mahadeva’s documents and publications he kept over the years. Imprisoned without trial as a security threat with more than a hundred other political and union leaders, he had no recourse but to subject himself to six years of unjustified detention.

The orthodox narrative of Singapore’s anti-colonial struggle frames Maha and others arrested under Operation Coldstore as communists, pro-communists or exploited by communists. This was the framework used by British colonialists against anti-colonial forces that did not serve their economic and strategic interests in the context of the Cold War. It continues to be the narrative deployed by the post-colonial government to whom the British had handed over power. Although those who had been imprisoned vehemently and persistently denied the charges their voices were not heard. New counter narratives emerged only after space for them had been opened up by the medium of the internet. Their narratives served as a corrective to the orthodox view, and paved the way for a richer construction of Maha’s biography than was possible in 1999 when he started his oral history.

Another window for articulating a counter-narrative to the orthodox Singapore story also emerged when the British colonial archives were made available for public research. These raised serious doubts about the grounds on which Operation Coldstore had been used to imprison those engaged in anti-colonial resistance. Many puzzling aspects of Maha’s experiences, inexplicable even to him, can now be understood more clearly as a result of studies made of the British archives by either historians or ex-political detainees such as PJ Thum, Geoff Wade and Poh Soo Kai. This approach of looking at colonial archives to understand Singapore’s history had already been pioneered by Tim Harper, former Chair of the History Department at Cambridge University, when he contributed his chapter on Lim Chin Siong to the volume, Comet in our Sky.

Both the expanding literature by ex-political detainees of Operation Coldstore and the study of the British colonial archives transformed the historiography of the birth of modern Singapore. However, these accounts do not give us a positive vision of what those who have been marginalised in the orthodox history stood for. The literature and journals, documents and diaries of those imprisoned at the time of Singapore’s anti-colonial struggle have been confiscated or obliterated. This is why Maha’s collection of journals, documents and diaries from that time open another window on Singapores history. They cast light on the ideological divide that separates the orthodox and new Singapore histories.

Preface
Prologue: What Became of What-Was-His-Name?