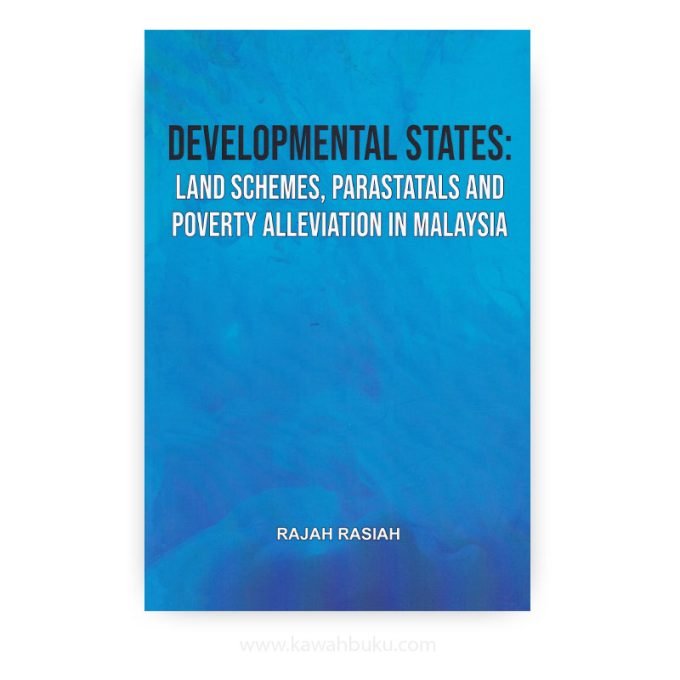 RAJAH RASIAH is Distinguished Professor of Economics at the Asia Europe Institute, University of Malaya.

Developmental States: Land Schemes, Parastatals and Poverty Alleviation in Malaysia is the 10th Ishak Shari Memorial Lecture that seeks to analyze the developmental role played by the Malaysian government in supporting rural development in general and poverty alleviation in particular. Other than oil palm, Malaysian agriculture has since the 1980s began to decline in significance. The food and beverages current account in particular has faced a trend worsening of trade deficit since 1989. Although not as spectacular as Singapore, South Korea and Taiwan, Malaysia’s per capita income also grew rapidly to transform the country to an upper middle-income country by the 1990s.

More importantly, the incidence of poverty in the country fell consistently from 49.3% in 1970 to 0.4% in 2016. While the shift to oil palm cultivation in Malaysia has not supported such a spectacular average annual economic growth rates as in South Korea, Taiwan and China, its record on poverty alleviation is still remarkable. The New Economic Policy (NEP), launched in 1971, was the first broad-based attempt to address ethnic imbalances following increased social tensions in the country culminating in bloody ethnic riots in 1969. Although political stability was a key consideration in the formulation of the NEP, its success depended heavily on raising yields, and falling unemployment rates and poverty levels.

While there were severe dislocations and disruptions to the social structure of the population, including external shocks from oil crises, the rapid integration of the rural economy with urban and external markets ensured that unemployment and poverty rates fell sharply over the period 1971-81. Adaptive innovation played a key role as the custodians of parastatals driving rural development focused on improving farm and fishing yields. While poverty levels continued to fall since, unemployment faced mixed fortunes as capitalist integration with the global economy exposed Malaysia to the vissititudes of volatile external economic swings from 1982.

Whereas the government in the period 1971-81 had focused on alleviating poverty since the 1990s it went on to target technological transformation to shift economic speacialization from low to high value-added activities. Serious efforts were taken to create the requisite science, technology and innovation infrastructure since 1991 to achieve this goal. However, not only was the emphasis overly concentrated on the manufacturing and services sectors, it also seriously lacked an appraisal framework to ensure that the selection of firms, directors and focal areas were vetted and monitored to restrict rent dissipation.

The government in 2003-2018 too did little to galvanize the agricultural sector. Consequently, the agricultural sector has continued to face a trend decline in value-added intensity of gross output. The slide is particularly serious among the small farms and rural farmers. Hence, whereas the incidence of poverty has continued to approach zero levels, incomes of the less advantaged population (below 40° o) have not improved significantly.

6. Towards an Innovative Institutional Model

12. The Malaysian Fisheries Development Board