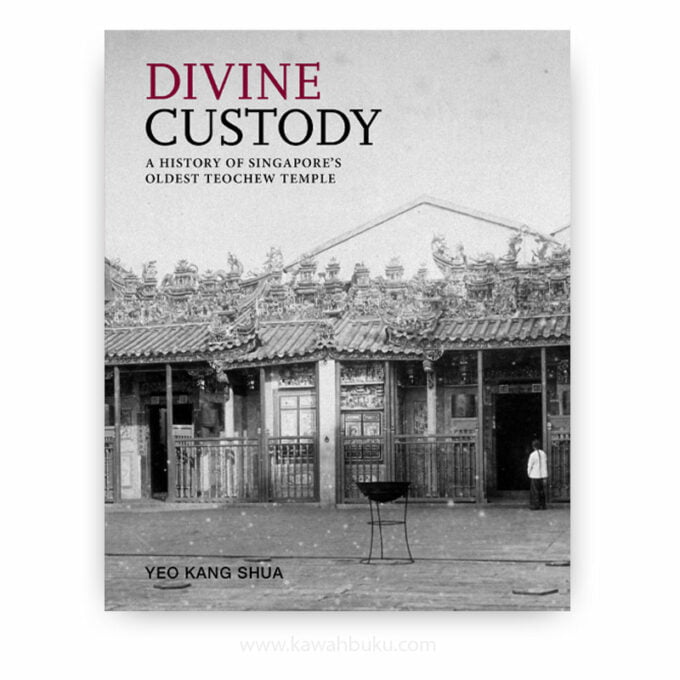 YEO KANG SHUA teaches at the Singapore University of Technology and Design and is an architectural restoration specialist.

Divine Custody: A History of Singapore’s Oldest Teochew Temple is exemplary in the way it uses material culture and architectural history as historical sources, and so will be of interest to heritage studies, history and those seeking to understand the experience of Chinese communities in Southeast Asia. Teochew-speaking gambier and pepper farmers were early settlers of Singapore at the turn of the 19th century. Wak Hai Cheng Bio, now surrounded by the skyscrapers of Singapore’s central business district, traces its history back to the earliest days of the colony. Its two deities—the Emperor of Heaven and Mazu, the Goddess of the Seas, tutelary deities of the Teochew people and travellers by sea respectively, long accompanied the sojourns of Teochew-speakers in the region. No written sources or inscriptions commemorate the founding of the temple, but the author’s research in the history of land tenure of Singapore and old maps and title deeds provide new evidence for the temple’s foundation.

Wak Hai Cheng Bio—also known as Yueh Hai Ching Temple or Twa Law Yaw Kiong to the Teochews—is Singapore’s oldest surviving Teochew temple. It houses two main deities: the sea goddess Māzǔ (妈祖), also known as Tiānhóu (天后); and Xuántiān Shàngdì (玄天上帝), the Mysterious Supreme Emperor of Heaven. The temple has a twin-shrine typology, with each primary deity housed in its own shrine. It is one of the few surviving examples of traditional Teochew architecture in Southeast Asia that has remained relatively unaltered since the late 19th century. Historically serving migrants from Canton province (Guangdong), it is today an important place of worship for devotees from all dialect groups. Over the years, the temple’s significance has expanded. It is now a heritage site, a tourist attraction, a National Monument, and an important repository of a wide range of traditional crafts. Given this significance, we must understand the social and architectural histories of the temple, the traditional crafts it showcases, and the techniques used in its restoration.

Despite the importance of Wak Hai Cheng Bio to Singapore’s cultural and religious landscape, the temple’s origins are unknown due to the absence of a historical stele and other written records. Writings on the subject have largely been uncorroborated or were based on anecdotal accounts. It is hoped that this book will provide new insights and answer questions pertaining to Chinese architecture in Singapore in general and Singapore’s early Teochew organisations. This will be done through a careful study of the temples building fabric based on first-hand knowledge acquired during the 2010 to 2014 restoration, and in-depth research into the temple’s land, social and architectural histories.

Just as eloquent as these forms of textual evidence, and the many poetic and commemorative inscriptions that enliven the temple and charge its spaces with meaning, is the testimony of the building itself, its siting, materials, its ornamentation and artworks. The author led the UNESCO award-winning effort to restore the temple from 2010 to 2014, and so is uniquely placed to understand what its architecture can tell us of the legacies and histories of the communities that formed and were formed by the temple.

Chapter 1 History of the Temples Property and Origins

Chapter 2 Changing Social Relationships with the Temple across the Centuries

Chapter 3 Architectural Developments in the 19th and 20th Centuries