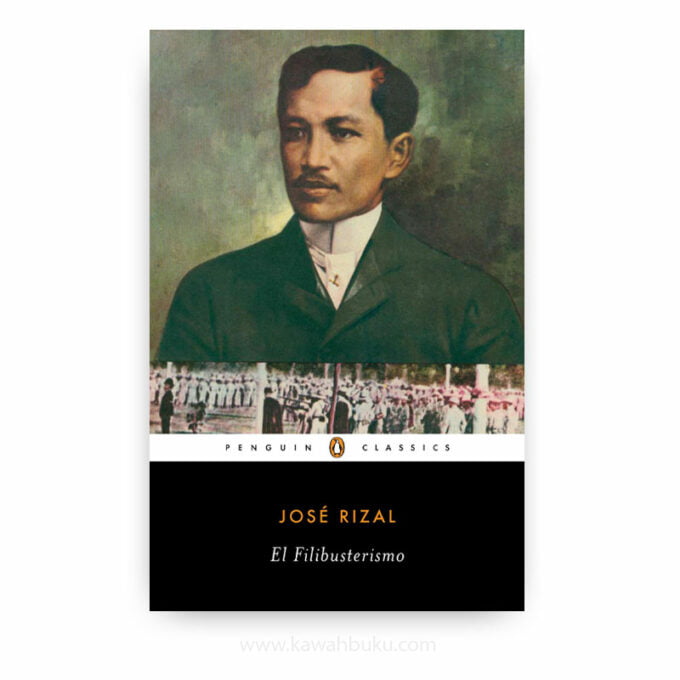 JOSÉ RIZAL (b. 1861 – d. 1896) is known as the hero of the Philippines and the greatest champion of Filipino nationalism and independence. He angered the Spanish authorities with Noli Me Tángere and its sequel, El filibusterismo and was executed.

El Filibusterismo is a thrilling and suspenseful account of Filipino resistance to colonial rule that still resonates today. The second and last novel completed by José Rizal (though he left behind the unfinished manuscript of a third one), El Filibusterismo is a sequel to Noli Me Tangere. A dark, brooding, at times satirical novel of revenge, unfulfilled love, and tragedy, the Fili (as it is popularly referred to) still has as its protagonist Juan Crisóstomo Ibarra. Thirteen years older, his idealism and youthful dreams shattered, and taking advantage of the belief that he died at the end of Noli Me Tangere, he is disguised as Simoun, an enormously wealthy and mysterious jeweler who has gained the confidence of the colony’s governor-general.

A number of other characters from the Noli reappear, among them: Basilio, whose mother and younger brother Crispin met tragic ends; Father Salví, the devious former curate of San Diego responsible for Crispin’s death, and who had lusted after Ibarra’s love, María Clara; the idealistic schoolmaster from San Diego; Captain Tiago, the wealthy widower and legal father of María Clara; and Doña Victorina de Espadaña and her Spanish husband, the faux doctor Tiburcio, now hiding from her with the Indio priest Father Florentino at his remote parish on the Pacific coast.

Where Ibarra had argued eloquently against violence to reform Manila society, Simoun is eager to foment it in order to get his revenge: against Father Salví, and against the Spanish colonial state. He hopes to liberate the love of his life, María Clara, from her suffocating life as a cloistered nun, and the islands from the tyranny of Spain. As a confidant to the governor-general, he advises him in such a manner as to make the state even more oppressive, hoping thereby to force the masses to revolt. Simoun has a few conspirators, such as the schoolmaster and a Chinese merchant, Quiroga, who aid him in planning terroristic acts. In sum, Simoun has become an agent provocateur on a grand scale.

Basilio, now a young man, has risen from poverty to become Captain Tiago’s charge. Close to acquiring his medical degree, he is pledged to Julí, the beautiful daughter of Cabesang Tales, a prosperous farmer whose land is taken away from him by the friars. Tales subsequently murders his oppressors, turns to banditry, and becomes the scourge of the countryside.

In contrast to Simoun’s path of armed revolution, a group of university students—among them, Isagani, Peláez, and Makaraig—push for the founding of an academy devoted to teaching Castilian, in line with a decree from Madrid. Opposed even to such a benign reform, the friars manage to co-opt the plan. Subsequently, the students are accused of being behind flyers that call for rebellion against the state. Most observers see the hand of the friars in this whole affair, which results in the incarceration of the student leaders, even of Basilio, though he was not involved, and the break-up between Isagani and the beauteous Paulita Gómez, who agrees to marry the wealthy Peláez, much to the delight of Doña Victorina, who has favored him all along.

In the meantime, Tiago, addicted to opium, dies of a drug overdose while attended to by Father Irene. A meager inheritance is all that is given to Basilio and all the incarcerated students are soon released except for him. Julí approaches Father Camorra to request him to obtain Basilio’s release. The friar attempts to rape her but she commits suicide rather than submit to his lustful designs. Released from prison, with Julí dead and his prospects considerably dimmed, Basilio, one of the few who knows who Simoun really is, reluctantly becomes a part of the latter’s plot.

The lavish wedding celebration is to be held at the former residence of Captain Tiago, purchased by Don Timoteo Peláez, the bridegroom’s father. Simoun has mined the residence, so it will blow up once a fancy lamp—packed with nitroglycerin, it is Simoun’s wedding gift—has its wick lit. The resulting assassination of the social and political elite gathered at the feast will be the signal for armed uprising. But Isagani, informed by Basilio of what will happen, rushes into the house, snatches the lamp, and throws it into the river, and in the confusion is able to escape.

The planned uprising is aborted, and Simoun’s true identity is finally revealed, partly through a note, he leaves for Father Salví at the feast. Wounded, he eludes capture and manages to seek refuge at Father Florentino’s residence. There, he commits suicide but not before revealing to the priest what he has wrought. He leaves behind his case of jewels, which the good father throws into the sea, with the injunction that the precious stones yield themselves only when the country needs them for a “holy, sublime reason”.

Introduction by Harold Augenbraum: Rizal’s Ghost
A Note on the Translation
Suggestions for Further Reading