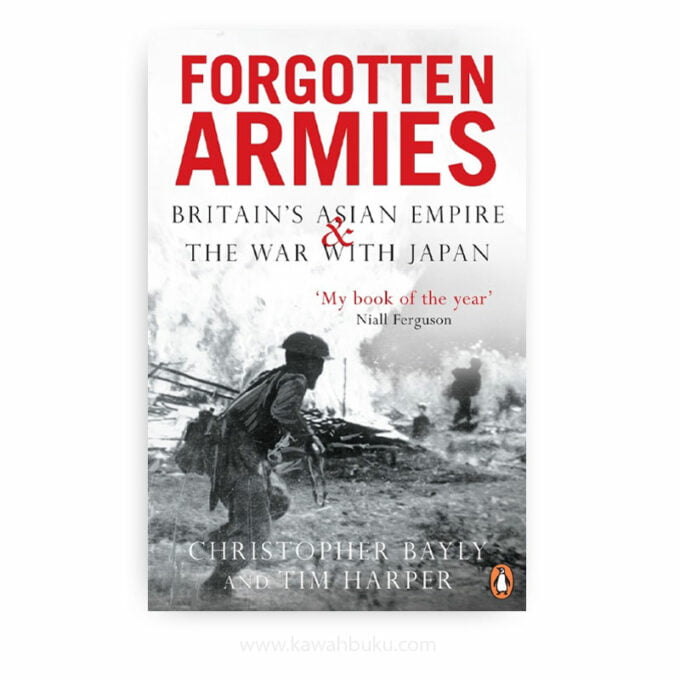 Forgotten Armies: Britain’s Asian Empire and the War with Japan

CHRISTOPHER BAYLY is Vere Harmsworth Professor of Imperial and Naval History, University of Cambridge and a Fellow of St Catharine’s College, Cambridge.

TIM HARPER is a Fellow of Magdalene College, Cambridge.

Forgotten Armies: Britain’s Asian Empire and the War with Japan brings to life the entire experience of South and Southeast Asia during the Japanese invasion period, telling the story from an Indian, Burmese, Chinese or Malay perspective as much as from that of the British or Japanese. Effectively it is the story of the birth of modern South and Southeast Asia and the hopes and fears of the dozens of ‘forgotten armies’ marching through the jungle battlefields, so many dying for causes swept away by the reality that emerged in 1945. Even as the British successfully fought back in the bloodiest battles in South and Southeast Asia’s history, there was no going back to colonial rule.

This book spans a huge territory from India to Malaya: the heart of the British empire in the East. Of course, ‘British Asia’ was larger than this. It encompassed Hong Kong and the Treaty Ports of China; there were possessions east of Singapore: the territories of the ‘White Rajah‘ of Sarawak and the British North Borneo Company. The experiences of Hong Kong and Shanghai are central episodes of the war in China; and the fate of British Borneo became interwoven with that of the Netherlands East Indies. But these campaigns lie somewhat outside this story.

The authors focus instead on the connected crescent of land between Calcutta and Singapore: the pivot of the fighting of the Far Eastern war. The authors do so because this was the territory spanned by the people of these forgotten armies themselves, whose experiences give unity to this story. Since the immediate post-war years, the historical study of South and Southeast Asia has collapsed into a series of academic specialities and public memory has also fragmented. Burmese history, in particular, has been almost forgotten following the country’s retreat into virtual isolation after 1960. The story of India at war from 1939 to 1945 has been pushed to the margins by the telling and retelling of the story of independence and the partition of British India into the republics of India and Pakistan.

The memory of war in Malaysia and Singapore is troubled by many events that later national histories have tried to forget, and the full story of the resistance to the Japanese has been obscured by the shadow of the communist insurgency of 1948 — 60. Above all, it has been forgotten that the histories of these different regions were firmly intertwined, and above all during the Second World War. Japanese commercial communities across the whole region provided an unofficial fifth column for their army’s invasion of 1942, for instance. Indian lawyers, businessmen and plantation workers scattered throughout Southeast Asia by decades of migration became recruits to the Japanese sponsored Indian Independence League and the pro-Japanese Indian National Army. Punjabis and Baluchis from the far northwest of Britain’s Indian Empire fought in Burma and Malaya under the British flag.

The Overseas Chinese too fought Japan in Malaya and, with their financial muscle, in China itself. Japanese armies and their camp followers thrust together into one unit the British, French and Dutch colonies in 1941 and 1942. For some months in 1945, the whole area from the borders of Bengal and Assam almost as far as the Australian Sea was united by the Allies for the first and only time in a single, interconnected administration. The very term ‘Southeast Asia’ was coined to describe this huge crescent of land. The aim of Forgotten Armies: Britain’s Asian Empire and the War with Japan, therefore, is to reassemble and reunite the different, often unfamiliar but connected narratives of these epic events and to put the stories of the great men and the great battles of the period into the context of the histories of ordinary Asian men and women.

List of Illustrations
Maps
Some Key Characters
Preface: The Many ‘Forgotten Armies’

1. 1941: Last of the Indian and Burmese Days
India on the brink
Indian politics as usual?
Burma unready
The world of the hills and the ‘tribes’
Dorman-Smith reaches his ‘backwater’
Burmese and others
Endgame: the governor and the politicians

2. 1942: A Very British Disaster
The fortress that never was
The arrow leaves the bow
The battle of Malaya
‘The modern Ponapeiians’
Flotsam and jetsam

3. 1942: Debacle in Burma
The road to Rangoon
From scorched earth to green hell
Burma’s false dawn
Death of the innocents
Would India hold?
Total defence in the hills: the Lushai levies
The Nagas, the Kachins and the anthropologists
The monsoon of 1942: an unnoticed turning point

4. 1942: The Abyss and the Way Back
The rape of Malaya
The ‘New Malai’
Desperate journeys: Burma in late 1942
India ablaze
The forgotten armies mobilize

5. 1943: Valleys of the Shadow of Death
Uneasy allies
Another fiasco in Arakan
India in the doldrums
The great starvation
The slow fight back begins

6. 1943: Personal Wars
Ba Maw’s apotheosis
The ‘Spirit of Asia’ and the Malay nation
The second coming of the Indian National Army
Life in the time of tapioca
‘Life without salt’
War by proxy
High councils: Tokyo, Cairo and Tehran

7. 1944: The Pivot of the Fighting
Japan’s final throw
India on the offensive
Battle commences: Imphal and Kohima
The politics of war
Japan’s forgotten army

8. 1944: The Nemesis of Greater East Asia
Heroism and murder in the hills
The crumbling of ‘Free Burma’
Roads to the death railway
Silent armies
The peninsular war
New balls at Wimbledon

10. August 1945: An End and a Beginning
Final journeys down the crescent
Forgotten armies, forgotten wars