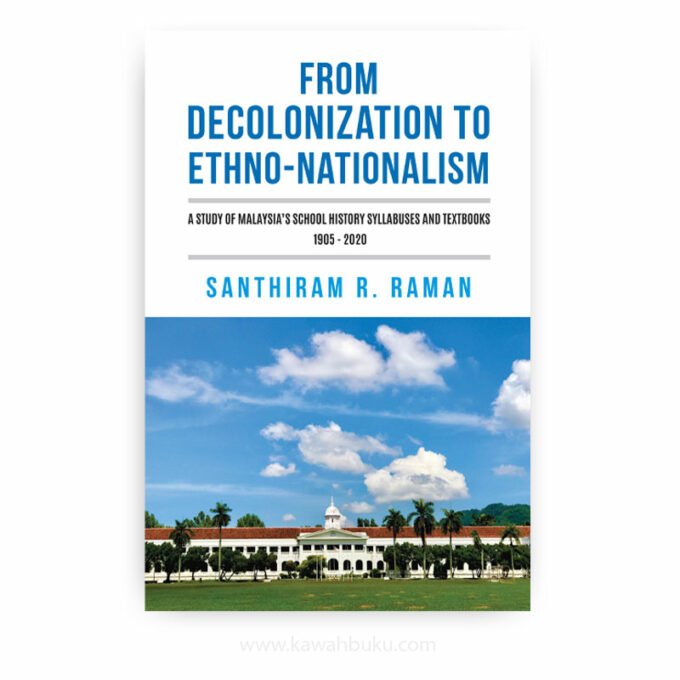 From Decolonization to Ethno-Nationalism: A Study of Malaysia’s School History Syllabuses and Textbooks, 1905-2020

SANTHIRAM R. RAMAN is a retired Professor of Education and Dean of the School of Education, Languages, and Communications, Wawasan Open University, Penang.

From Decolonization to Ethno-Nationalism: A Study of Malaysia’s School History Syllabuses and Textbooks, 1905-2020 is a critique of the history of education in Malaysia’s school system, past and present in which too often hijacked by political elites. The study aimed at tracing the development of history teaching in the English medium schools in Malaysia through the syllabuses and the textbooks used, and thus examined how relevant this teaching was to the nation in terms of promoting awareness of national heritage and unity.

History teaching in the English medium schools during the colonial period and thereafter was singled out for examination because it was only in these schools that we saw a microcosm of a Malayan plural society. It was in these schools that the beginnings of social integration within the plural society could have been nurtured. The predominantly urban base of English-medium schools and the opportunities afforded for the intermingling of children from the major ethnic groups could have abetted the growth of national unity and consciousness if the pupils were made aware that a common future had to be moulded despite their diverse origins.

At the same time, the orientation of education in these schools might have negated the advantages to be gained from these interactions. To be sure, the author is aware that the colonial enterprise was not concerned with promoting a national consciousness in the colonies, which would be to the detriment of the colonial future. The terminal nature of Malay primary education before independence afforded little scope for effective history teaching.

The Chinese and Tamil schools made the pupils aware of nationalism, but of a different sort. Chinese schools, left to develop on their own until 1920, provided the sort of education that embroiled the schools in the contest for allegiance between the reformers and the revolutionaries in China. Overseas Chinese were viewed as citizens of mainland China and their education had a strong bias towards matters pertaining to China. Meanwhile, the Tamil schools promoted a sort of awareness of India through official policy. Books were heavily India-centric and Tamil schools, like Malay schools, provided only terminal primary education.

This revised study comprises five chapters, an Epilogue and a Conclusion. A major addition to this volume lies in its chronological span. The Epilogue has extended the study to 2020, thus incorporating further changes in the development of the syllabuses and textbooks up to the contemporary period. It adds another dimension to the study where the Malaysia-centric history of yesteryears has been shifted, by official sanction, to an ethno-nationalist history for schools.

Chapter 1 Role of History in Education

Chapter 5 Towards New Horizons: The Syllabus of 1978

References for Epilogue
Bibliography
About the Author