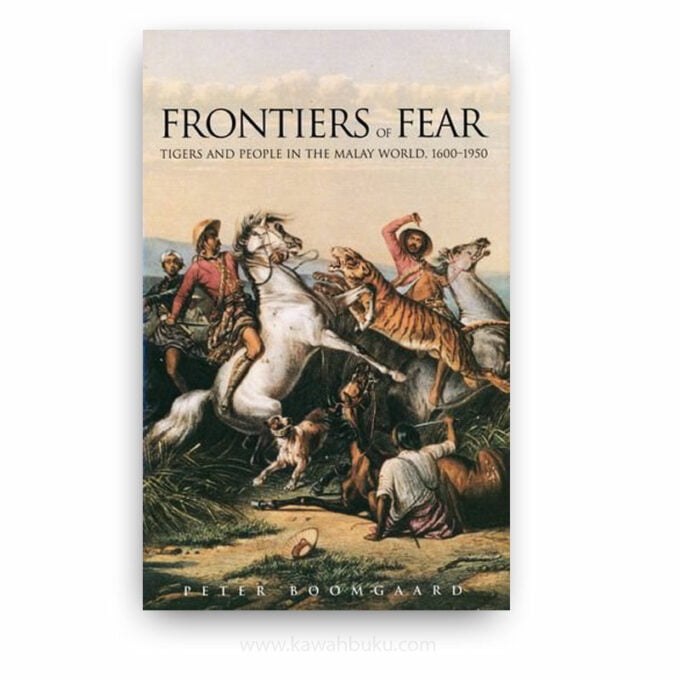 PETER BOOMGAARD is a senior researcher at the Royal Institute of Linguistics and Anthropology, Leiden, the Netherlands, and a professor of the economic and environmental history of Southeast Asia at the University of Amsterdam.

Frontiers of Fear: Tigers and People in the Malay World, 1600-1950 documents the “big cat”–human relationship in this area during its 350-year colonial period, re-creating a world in which people feared tigers but often came into contact with them because these fierce predators prefer habitats created by human interference. Peter Boomgaard shows how people and tigers adapted to each other’s behaviour, each transmitting this learning from one generation to the next. He discusses the origins of stories and rituals about tigers and explains how cultural biases of Europeans and class differences among indigenous populations affected attitudes toward the tigers. He provides figures on their populations in different eras and analyzes the factors contributing to their present status as an endangered species. Interweaving stories about Malay kings, colonial rulers, tiger charmers, and bounty hunters with facts about tigers and their way of life, the book is an engrossing combination of environmental and microhistory.

Throughout the book, on the basis of historical evidence, Boomgaard challenges contemporary views about tiger behaviour, seeking to end the monopoly of the Bengal tiger as the definitive source of knowledge on the species. Traditionally received scientific and popular wisdom, that significant man-eating by big cats is essentially a phenomenon of the Indian subcontinent, has been destroyed. Boomgaard has chosen comparative indigenous and colonial publications as the data source for the annual carnivore kills of humans and the annual human kills of carnivores (expressed in bounty statistics that, in Java, dating back to 1644). Thus, for the period from 1862 to 1904, while India holds pride of place in terms of the annual average of persons killed when it comes to the stakes for annual kill totals per unit of population, India loses its leading position to Indonesia by significantly more than a short half-head.

Boomgaard traces changing big-cat kills of humans over time, relevant to the changing patterns of agriculture and political control (both indigenous and European based). Initially, areas of land cleared for agricultural enterprise at the edge of the rainforest offer new, preferred hunting habitats for tigers, resulting in a significant increase in tiger predatory acts upon humans. These events are eventually modified by the development of towns with their high population density separated from the preferred areas of tiger operation, resulting in a significant decrease in predatory attacks per unit of the human population.

Boomgaard argues that between 1600 and 1950 in India the relationship between tigers, as predators, and people, as prey, appears to be fairly stable; whereas the islands of the Indonesian Archipelago show vastly changing human populations and an equally variable tolerance of being preyed upon by big cats. A flexible relationship applies to Sumatra, certainly extending to a tolerance of cattle-killers and even a reluctance to destroy man-eaters. Massive retaliation against the carnivores occurs in Java, exceeded only by the total retaliation against carnivores in Bali—expressed in the complete extinction (first predicted in 1849) of the subspecies of the tiger on the island (the last confirmed specimen was killed in 1937).

With his detailed knowledge and experience of both the archives and environments in question, Boomgaard is able to place indigenous attitudes to these big cats within indigenous belief and social contexts, in contrast to the intellectual arrogance of European colonists and their simplistic treatment of indigenous beliefs, rituals, and behaviours. While the arrival of guns, germs, and steel (the latter in the shape of tiger traps and cars for colliding with wildlife) made a difference in tiger-human relationships in South East Asia, European big-game hunters (despite their all-powerful image) probably had little impact on carnivore populations in Java and only a restricted impact on their numbers in Malaya. Boomgaard equally challenges European assumptions about the antiquity of indigenous tiger rituals, in favour of local cultural construction of these rituals around the time of the earliest known public display of tigers in 1605.

Each chapter, reflecting different perspectives on animal and human interactions, concludes with a unique synthesis of material, leading up to the fine-tuned elegance of the final chapter, entitled “Living Apart Together,” which, in an exciting manner, draws the different historical, anthropological, and zoological threads into a unified whole. The sheer Kuhnian pleasure in reading this text is not to be missed.

2. Meeting the Tiger and the Other Big Cats

5. Ancestors for Sale: Bounties for the Big Cats

8. The Ancestral Tiger: From Protection to Punishment

9. Devouring the Hearts of the People: The Weretiger

10. The Rise, Decline, and Fall of the Tiger