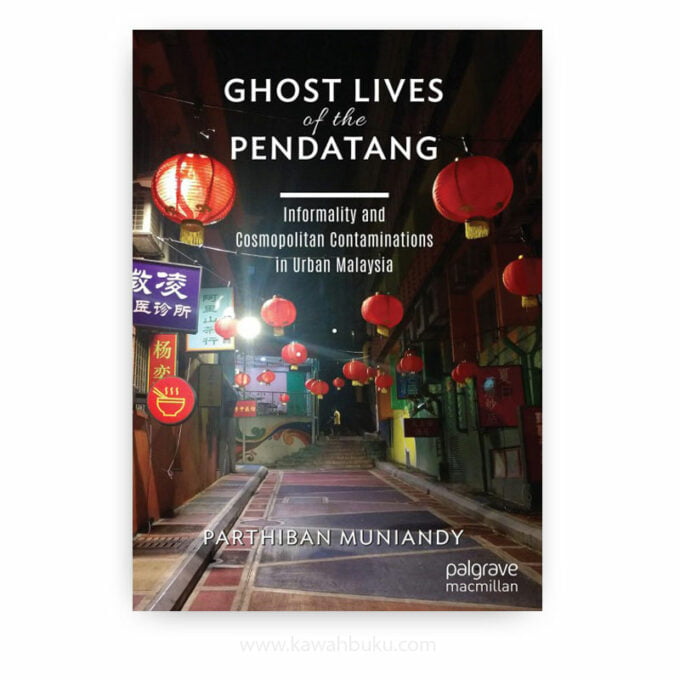 Ghost Lives of the Pendatang: Informality and Cosmopolitan Contaminations in Urban Malaysia

PARTHIBAN MUNIANDY is a full-time faculty in Sociology and Faculty Director at Sarah Lawrence College for the Consortium on Forced Migration, Displacement and Education, an initiative funded by the Mellon Foundation.

Ghost Lives of the Pendatang: Informality and Cosmopolitan Contaminations in Urban Malaysia is an ethnographic study of migrants, refugees and ‘temporary’ people in Malaysia, incorporating narratives, personal stories, and observations of everyday life in Kuala Lumpur and Georgetown, Penang. Rather than focusing on specific migrant communities or refugee ‘camps’, the book takes subaltern cosmopolitanism as its central lens to look at how different and diverse communities of non-citizen ‘pendatang‘ (aliens) co-habit, work and live together in Malaysia. Urban centers in Malaysia offer the space for informality that allows stateless and undocumented people to seek out opportunities, while also finding ways to assimilate or even ‘disappear’ into the fabric of society.

The book focuses on the notion of ‘contaminations’, rather than migration or migrants, to underscore one of the most important findings of the ethnographic study—that migrant life in Malaysia is critically integral, embedded and interwoven into everyday life in the city-shaping and affecting all aspects of daily life from production and supply chains, food service networks, cultural and religious practices, waste and recycling work, to more intimate and private contexts such as romantic relationships, family life and sex-work. Hybridity, inter-mixing and bastardization are part and parcel of everyday urbanism in Kuala Lumpur and Penang—these ‘contaminating elements’ challenge and disrupt categories of the ‘national’ and categories such as insider/outsider, national purity, and politically constructed divisions between ethnic and racial groups.

In Southeast Asia, ghost populations are a common everyday presence in our lives, an open secret that everyone is aware of but would happily ignore. They are the people who clean, cook, build, and serve those of us privileged enough to not be in the positions of precarious servitude. They are those who work in the hidden spaces and places where most of us would rather not see or go, unless in search of very specific services. They are people who perform functions and fulfil tasks that most know to be essential, yet we would prefer if they do not make demands for fair compensation. They are part of the scaffolding of local and global economics, whose work has been systematically undermined and rendered invisible.

The ghosts among us work and toil at jobs that are important yet are severely devalued in social and financial terms—work that is considered dirty, dangerous, and demeaning. Street-cleaning, construction work, food service, and sex work, among a host of other forms of work, fall within the category of undesirable labour. But it is more than simply the poor, proletariat, and subaltern classes stuck working jobs that are unviable, precarious, and terrible. The current form through which people are turned into ‘ghosts’—that is, groups of workers who are no longer seen as part of the demos in any meaningful way—represents a very modern form of disenfranchisement and exclusion, entailing technologies of marginalization and displacement that render certain populations as temporary, in limbo and transitory, stuck in a state of constant impermanence and unbelonging. These are the subalterns who are cast apart as a global servant class, a global precariat produced by advanced capitalism.

Ghost Lives of the Pendatang thus relies upon detailed ethnographic narratives curated over a decade of study, offering students interested in fieldwork research insights into the types of engagements and commitments necessary for helping build the complex, uneasy and destabilizing knowledge that characterizes critical ethnography.

2. Life in the Kongsi Settlements of KL and Penang

4. Transitory States: Ghosts in the Shadows