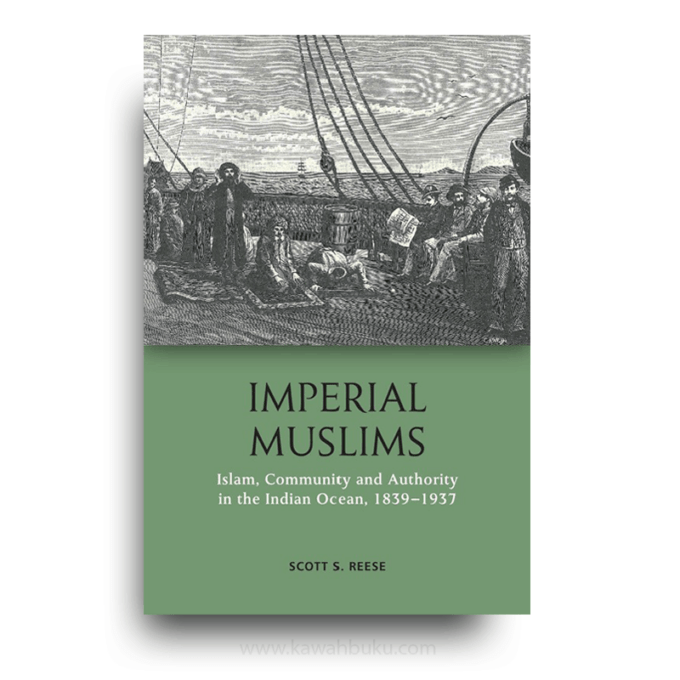 SCOTT S. REESE is a Professor of Islamic History at Northern Arizona University and author of Renewers of the Age: Holy Men and Social Discourse in Colonial Benaadir (Brill, 2008) and The Transmission of Learning in Islamic Africa (Brill, 2004).

This eBook was republished courtesy of the Edinburgh University Press Open Access, under Creative Commons license.

Imperial Muslims: Islam, Community and Authority in the Indian Ocean, 1839-1937 explores the social consequences of Britain’s creation of an Indian Ocean empire that brought millions of Muslim subjects under a single political umbrella for the first time in the modern era. The webs, nodes, and networks created by Britain’s Indian Ocean Empire during the nineteenth and twentieth centuries are here explored in the context of their personal and social impact.

Using the British Settlement of Aden as its focus, the book examines the development of a local community within the spaces created by imperial rule. It explores how individuals from widely disparate backgrounds brought together by the networks of the empire created a cohesive community utilizing the one commonality at their disposal: their faith. The case of Aden allows an examination of a community that was created by the colonial moment, rather than just shaped by it

Specifically, it examines how religious institutions and spiritual ideas served as parameters for the creation of community and the kinds of symbolic and cultural capital an individual needed to attain communal membership and influence within the confines of imperial rule. The book also shows how individuals are drawn together from enormously diverse geographic, cultural and social backgrounds to manage the realities of everyday life together via a common Islamic discursive tradition. It provides insight into how believers accessed an Islamic ontology and shared concepts of the universe, along with more observable institutions to shape their community within the confines of imperial rule.

The impact of the British Empire on the Indian Ocean and Islamic societies has been heavily studied. Over the last decade, historians have written about the nature of Britain’s presence in the Indian Ocean, characterizing it as a complex web of economic and political power. Among the most notable are Sugata Bose and Thomas Metcalf, whose approaches are primarily structural in nature, concerned with the administrative, economic and political effects of Britain’s Indian colony on its wider Imperial realm. David Lambert and Alan Lester have noted in their book Colonial Lives across the Empire that, while such forces certainly played an important role in shaping empire, the communities that emerged from this process were created through the intersection of multiple trajectories of “people, objects, texts, and ideas.” While excellent works of scholarship, these and others focus largely on the political, economic and legalistic consequences of empire.

Few address the social consequences inherent in Britain’s creation of what was effectively an Indian Ocean empire that brought literally millions of subjects under a single political umbrella for the first time in the modern era. None examines the impact of empire on the region’s single largest confessional community: Muslims.

Scholars of Islam, as opposed to historians of empire, have devoted a great deal of attention to the impact of nineteenth- and twentieth-century colonialism on Muslim societies. Much of this has focused largely on the highest levels of religious discourse and the notion of religious reform. Qasim Zaman’s writings on the evolution of reformist thought in the late colonial period and Samira Haj’s work on Muhammad Abduh have greatly enhanced our understanding of Islamic reform within the colonial context. They demonstrate that, while informed by widespread ideals of religious scripturalism current within the “Islamic international,” specific reformist ideas were always shaped by local conditions and concerns.

More significantly, scholars such as Haj and Talal Asad argue persuasively that rather than a simple reaction to a monolithic Western imperialism, modern Muslim reformist discourse must be understood as only one element in an evolving discursive tradition concerning correct belief and practice embedded in a variety of historically contingent institutions, practices and forms of power within particular communities and contexts. This is undoubtedly an important insight, however, focus on the shaping of the highest levels of the debate has led to a preoccupation with Islamic reform movements. In doing so, other aspects of Muslim spirituality and society that were also responding to colonial rule via the discursive tradition are left underexamined.

Imperial Muslims: Islam, Community and Authority in the Indian Ocean, 1839-1937 seek to remedy what is frankly a critical gap in our understanding of Muslims under colonial rule in a number of ways. The case of Aden entails the examination of a community that was actually created by the so-called colonial moment rather than simply shaped by it. As such, it allows us to explore how individuals, drawn together from enormously diverse geographic, cultural and social backgrounds, actually managed the everyday realities of living together. It also provides insight into how empire itself facilitated the emergence of what were effectively new communities created in part through the movement of ideas and people—as well as imperial design—leading to the rise of new social contexts, constructs and novel constellations of authority. Reformist discourse and the imperial milieu form important parts of this book, but they are only elements of a larger story.

The local community of believers was defined by many other commonalities, including veneration of the saints, spirit possession cults (with varying levels of attachment to the Islamic multiverse) and a shared ontological understanding of the universe. Such metaphysical common ground provided many venues for individuals to create bonds with one another. But, as we shall see, it also afforded avenues to connect with Aden itself as a node in a wider sacred geography. As a result, the study of Aden affords an opportunity to expand our understanding of “discursive tradition” and its role in shaping the lives of believers.