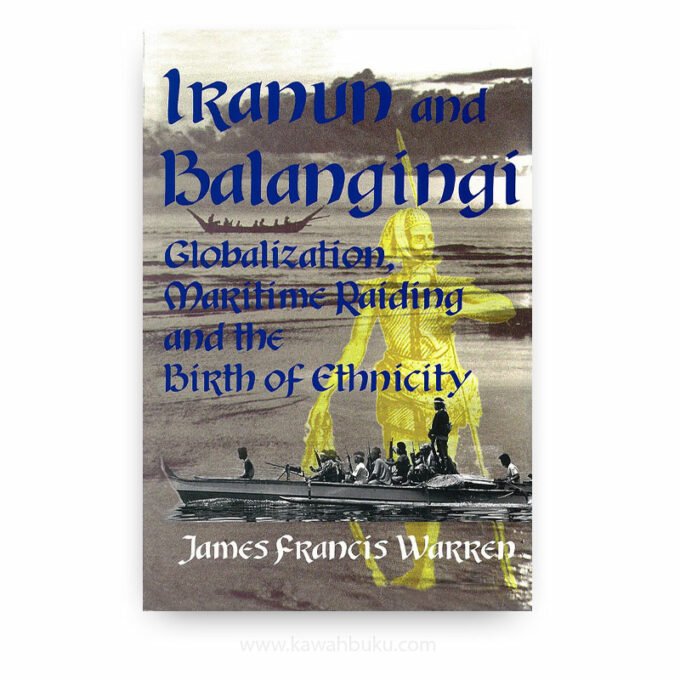 Iranun and Balangingi: Globalization, Maritime Raiding and the Birth of Ethnicity

JAMES F. WARREN is Professor of History and Southeast Asian Studies at Murdoch University and has taught at Australian National University, Yale and Kyoto University.

Iranun and Balangingi: Globalization, Maritime Raiding and the Birth of Ethnicity explore ethnic, cultural and material changes in the transformative history of oceans and seas, commodities and populations, mariners and ships, and raiders and refugees in Southeast Asia, with particular reference to the Sulu-Mindanao region, or the ‘Sulu Zone.’ The oceans and seas of Asia, East by South, from Canton to Makassar, and from Singapore to the Birds Head coast of New Guinea, crossed by Iranun and Balangingi raiding and slaving ships, Southeast Asian merchant vessels and colonial warships have been the sites of extraordinary conflicts and changes often associated with the formation of ethnic groups and boundaries, political struggles and national histories. Examining the profound changes that were taking place in the Sulu-Mindanao region and elsewhere, this book, the companion volume to The Sulu Zone, charts an ethnohistorical framework for understanding the emerging interconnected patterns of global commerce, long-distance maritime raiding and the formation and maintenance of ethnic identity. The author begin by tracing the evolution of Iranun maritime raiding from its late eighteenth-century origins to support the English supplies of tea from China, into the nineteenth century’s systematic, regional-based slaving and marauding activity. The author then draw out the implications of that evolution for colonial systems of domination, development and discourse in the context of transoceanic trade, crosscultural commerce and empire building.

For several centuries, the Sulu-Mindanao region has been known for “piracy.” In the early nineteenth century, entire ethnic groups specialized in the state-sanctioned maritime raiding—Iranun and Balangingi—attacking Southeast Asian coastal settlements and trading vessels sailing for the fabled Spice Islands, or for Singapore, Manila and Batavia. When people think of slavery in Southeast Asia, they imagine tens of thousands of peoples stolen from their villages across the region and sent directly to work the large fisheries and wilderness reserves of the Sulu Sultanate. The insatiable demands of the sultanate for labor to harvest and procure exotic natural commodities, such as sea cucumber and birds’ nest, reached a peak in the first half of the nineteenth century as the China trade flourished. Now in this new globalized world, Jolo, Balangingi, Canton, and London were all intimately interconnected. A major feature of this emerging global economy was that over 200 years ago, Europe and the then emerging markets of East and Southeast Asia were tangled in a commercial and political web that was in many ways just as global as today’s world economy. Yet another characteristic of late eighteenth and nineteenth century globalization was that it went hand in hand with degeneration and fragmentation. Even as economies of traditional trading states such as Sulu’s integrated, others, for example the sultanates of Brunei and Cotabato, disintegrated, while regional populations across Southeast Asia in the process were fragmented, scattered and relocated. This book looks at the large-scale forced migrations of the unfortunate mass of captives and slaves caught in the cogs of the Sulu economy, which shaped the demographic origins of the Iranun and Balangingi and the overall population trends and settlement patterns of much of the Philippines and Eastern Indonesia well into the end of the nineteenth century.

Less than two centuries ago, few homes in Southeast Asia’s vast patchwork of coastal settlements had been left unscathed by the “Illanun.” Many people lost their kin and were forever haunted by their loss. Silent capture, swift retreat often marked the coastal slave raids by the Iranun and Balangingi in the nineteenth century, lying in wait along a path or creek to an isolated stretch of coast near a small settlement. Victims—especially women and children—were generally welcomed as new members of these maritime Muslim communities to which they were forcibly taken, often hundreds if not a thousand miles away. Most captives and slaves accepted their fate and new roles, large numbers replacing Iranun and Balangingi members lost to the hazards of nature, sea warfare and disease.

In a detailed analysis of the maritime raiding and slaving operations of the Iranun and Balangingi, as well as those of other seafaring groups like the Tobello, this book considers how, over a span of a century, the economy of the Sulu Sultanate expanded and was integrated into the modern world system as a result of interactions between European corporate trading enterprises, especially the British and the Dutch East India Companies, with China. The Sulu Sultanate was successful because it achieved global scale in particular types of commodity production, integrating labor acquisition and allocation-slaving and slavery-commodity production, marketing and other functions on a global-regional scale. The losers in this contest were traditional states and ethnic groups that neither achieved nor specialized on a global-regional scale, but relied on an entrenched position in their local markets for the bulk of their power and profits.

Iranun and Balangingi also explains how this essentially market-determined commercial encounter in the latter part of the eighteenth century, as the entangled fateful relationship between Britain, China and Sulu was established, transformed the population and history of Southeast Asia. In their remorseless search for captives and slaves the Iranun and Balangingi brought the “border ares,” or moving frontiers of the margins of the Malayo-Muslim world and of the various colonial peripheries, home to the centers, striking back at the empire’s heart around Batavia and Singapore, in the straits of Malacca and Manila Bay, and beyond, reaching right across the top of Northern Australia. These fearsome alien marauders originated from areas beyond the pale-unknown sites well outside the reach of colonial dominion. The Iranun and Balangingi profited from the expanding China trade, which they supplied with captives and slaves taken on the high seas and along the shores of Southeast Asia, in return for weapons and luxury goods. These sea raiders—the lords of the eastern seas—were the “shapers,” a set of ethnic groups that specialized in long distance maritime raiding but did it on a regional scale. Iranun and Balangingi also details the complexities of relations in the struggle over power and autonomy on the seas, between the maritime Islamic world of the Iranun and Balangingi and the conflicting interests and machinations of the colonial western powers bent on controlling the oceans and sea lanes. The study further demonstrates how a pathology of physical and cultural violence associated with global macro-contact wars and empire building, particularly with political struggles between the English and Dutch in various parts of Southeast Asia, led to widespread conflicts and regional tragedies.

This ethnohistory also offers a range of insights about the process of ethnic self-definition and the meaning and constitution of “culture” in the modern world system. The problem of ethnic identity and the formation and maintenance of “ultures” are elusive, complex and contested processes, practice and attributes which defy simple explanations and definitions. This way of accounting for the Iranun and Balangingi and their history also provides a new conceptual framework for understanding the problem of ethnic self-definition and political processes and conflicts in the recent history of the Philippines, Indonesia and Malaysia.

Iranun and Balangingi seeks to probe these themes through an interdisciplinary approach, using archival sources and literature, as well as period testimony, interviews and fieldwork observations from sites primarily located in the Philippines, Indonesia and Malaysia. The alleged battle between savagism and civilization, with glory for the Spanish, British and Dutch and, ultimately, tragedy for the Iranun and Balangingi as its inevitable outcome, formed a major theme and metaphor of much of the official record and the literature—published and unpublished—depicting ‘Malay Piracy’ in the period under consideration here. By looking at both traditional and contemporary historical and visual texts and oral traditions that are indicative of such profound cultural confrontations and intersections, this ethnohistory explores both the “birth” and “death” of ethnicities and cultures that originated in the violent intimacies of the encounter between expansive global capital and maritime Muslim cultures in conflict; conflicts that also originated in the demographic origins of particular ecological landscapes intersecting with traditional maritime borders and the forceful imposition of state-imposed colonial political boundaries on those borders and “maritime spaces.”

The broader issues of economic integration and identity formation that underpin this book also provide an apt backdrop to the current Muslim contestations and state and ethnic politics in the Philippines. Few other ethnic groups in Southeast Asia have developed such a notorious legacy of “piracy” than the Iranun and Balangingi. This book throws light on the principal fact that these maritime Muslim groups in the Sulu archipelago and southwestern Mindanao have always been very autonomous and led a free-roaring existence in Southeast Asian waters. These Vikings of Asia laid claim to being the true lords of the eastern seas in the age of sail. Iranun and Balangingi clearly demonstrates the economic motivation, geographical realities, cultural nexus, and religious impetus to ‘piracy’ in the area. Without that insight, it would be difficult to fully understand why Muslim autonomy remains such a burning issue in the Sulu archipelago and southwestern Mindanao today. While this ethnohistory deals with the historical legacy of ‘piracy’—the book is also a pertinent reminder of how cultures and ethnic identities are embedded in sea-faring lifestyles and political processes that have not, in certain aspects, changed dramatically over the last two centuries. The Iranun and Balangingi remain marginalized from the Filipino nation state and their intractable cause has only emboldened them to fight for ethnic identity, progress and autonomous statehood.