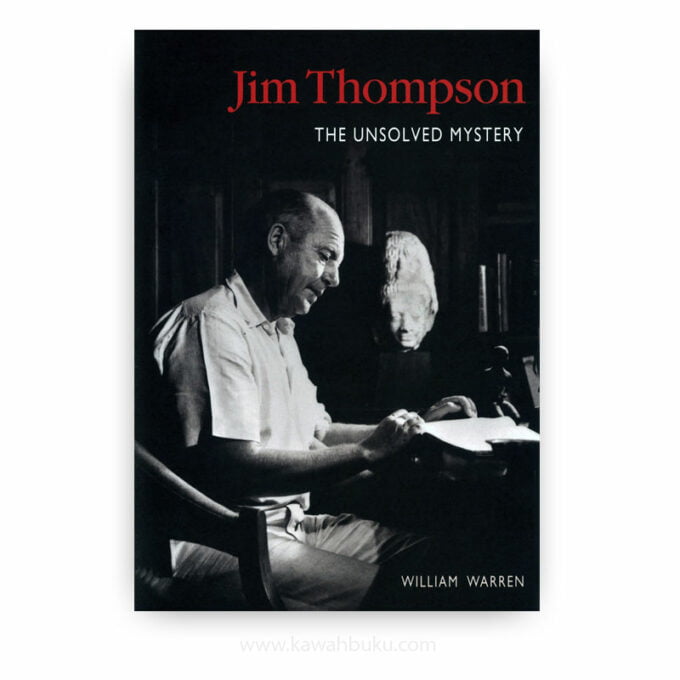 WILLIAM WARREN was a close friend and confidant to Jim Thompson. He settled in Bangkok over 50 years ago. He served as a lecturer at Chulalongkorn University for 30 years and has written numerous articles and books about art, culture, architecture, and landscape gardening in Thailand and Southeast Asia.

Jim Thompson: The Unsolved Mystery is a definitive account of the life of Jim Thompson, an American businessman and the founder of the modern Thai silk industry who disappeared while supposedly on a stroll in the jungle-clad Cameron Highlands in Central Malaysia on Easter Day, 1967. Neither Jim Thompson nor his remains have ever been found. Some twenty years earlier Jim Thompson had abandoned his former life to embark on an exotic business career in Southeast Asia. After establishing the Thai Silk Company, Thompson built a house and an art collection which are among Bangkok’s top tourist attractions today. After vanishing, he became the subject of a massive search and investigation, and a mystery that has never been solved. This definitive account of the life of Jim Thompson, written by a man who knew him well, gives the reader a first-hand glance into his private affairs and his alleged role as an agent for the CIA.

The facts were first recounted by William Warren in 1970 in his book The Legendary American. Today, many people in Thompson’s circle are no longer living, allowing the author, who knew Thompson well, to write more freely. This revised edition contains new material on Thompson’s private life and his alleged role as a CIA agent, drawn from interviews with people close to the events. The result is this definitive account of a true-to-life mystery of international proportions.

Jim Thompson, as he was generally known, was sixty-one years old in 1967. His life had not really taken its distinctive shape, however, until he was in his early forties, at an age when radical changes are difficult to make. Paradoxically, this is a restless time for many men, perhaps for the majority; they dream of turning their back on what they have achieved (or failed to achieve) and starting out on an entirely new path, but few ever take even the first step toward translating such vague desires into reality. Thompson was one of those rare few, and that he happened upon the new path accidentally does not diminish the rarity of what happened.

At this midpoint of his life, he abruptly abandoned everything that was familiar to him and moved into a world and a career as exotic as any novelist’s creation. What is more remarkable, he found in this new world, again by chance, fulfilment of certain innate talents that not only brought him personal satisfaction but also profoundly changed the lives of thousands of other people. In the twenty years before his ill-fated holiday in Malaysia, he had accomplished more than most men in a full life. He had built a major industry in a remote and little-known country whose language he never learned to speak, he had become an authority on art that, previously, he scarcely knew existed and had assembled a collection that attracted scholars from all over the world; he had built a home that was a work of art in itself and one of the landmarks of Bangkok, and, in the process of doing all this, he had become a sort of landmark himself, a personality so widely known in his adopted homeland that a letter addressed simply “Jim Thompson, Bangkok” found its way to him in a city of three and a half million people.

Thompson’s career in Thailand became one of the most popular postwar legends of Asia, recounted in dozens of publications and gathering, along the way, all the usual embroideries and distortions common to legend-making—some of them, it is only fair to say, invented by the subject himself. It was quite characteristic that only a week before he went to Malaysia he was interviewed for yet another telling of it by an American television crew. Given such renown, it is not surprising that his disappearance attracted widespread attention. What was less expected was that the disappearance should acquire a legendary life of its own, with even more distortions, one in which the man himself has been all but lost amid the fascinations of the mystery.

The following account has two purposes: to tell the first Thompson story in greater detail than has been possible in other published versions and to examine the second more closely and comprehensively than has been done. It is based on numerous interviews with people who were close to Thompson, on private letters, on all the material that has been printed concerning his career and disappearance, and on numerous conversations, the author had with Thompson over some eight years in Thailand. When it was first written, less than three years after the disappearance, Thompson was still legally alive, and there were various reasons for omitting or playing down certain aspects, particularly concerning his private life. This gave rise to certain misconceptions, some of which seriously affected conclusions drawn from them; in this revised telling of the story, an effort has been made to fill in some of the gaps and produce a portrait more in keeping with the man known to his close friends and associates, as opposed to the numerous impressions, both oral and written, that have come from people who, despite their claims, knew him only slightly at some stage in his life or, in some cases, not at all.

Even a casual reader will soon perceive, however, that Thompson, like most gifted men, was a complex person; and for this reason, there are inevitably assorted points of view about different aspects of his life. No account of either the career or the disappearance is likely to meet with complete approval from the many people who admired and the few who disliked him. What follows aims at telling the truth but it does not, it cannot, claim to be infallible. One could start the Thompson story at several places: with his arrival in Thailand, for instance, which is really the beginning of the first legend, or, more conventionally, with his birth and follow through chronologically. Considering the purpose of this book, it seems moré suitable to begin at that dividing point where the first legend came to a sudden, tragic end and the second began its curious growth.

Part One: A Walk in the Highlands

Part Three: The Making of a Legend

Part Four: Postscript on the Evidence