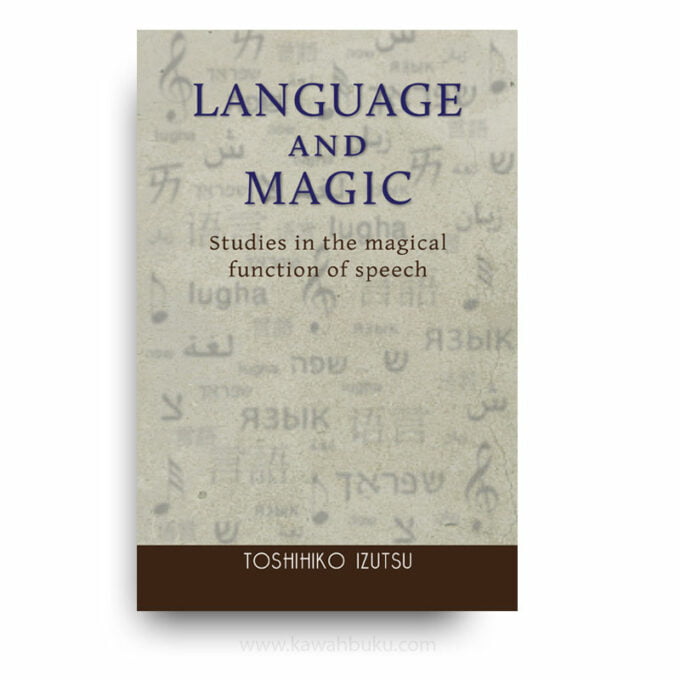 Language and Magic: Studies in the Magical Function of Speech

TOSHIHIKO IZUTSU was a well-known Japanese scholar on Islam, having taught at Keio University, McGill University, Montreal, and the Iranian Imperial Academy of Philosophy, Tehran.

The Other Press (Revised Edition, 2012)
199 pages including Index

Language and Magic: Studies in the Magical Function of Speech study the world-wide and world-old belief in the magical power of language, to examine its influence on the ways of thinking and acting of man, and finally to carry out an inquiry, as systematically as may be, into the nature and origin of the intimate connection between magic and speech. The present volume is the first to appear of a new series of publications on the Humanities and Social Relations that has recently been inaugurated under the auspices of the Institute of Philological Studies at Keio University, Tokyo.

From whatever angle we may approach it, language is a subject of infinite complexity, and the problems it raises are naturally varied and numerous in the extreme. It is little wonder that many widely different methods of inquiry have been proposed by various scholars sharing an interest in this phase of human activity. In view of such a situation, the author thinks it not out of place to try to clarify, by way of preliminaries, the nature of the main questions to be discussed in the following chapters and the kind of approach which the author shall follow in dealing with them so that he might indicate here in gross outlines the scope and limits of his investigation.

No one will deny that language stands first and foremost among the vital concerns of the present age. Indeed in both academic and popular circles, it is at present one of the most favorite topics. It is important to remark on the other hand that this general interest in linguistic problems is characterized by a markedly negative or critical attitude towards the working of the word, and this is altogether characteristic of the current trends of thought. We may usefully recall here the view which has been steadily gaining ground of late among radical thinkers that even philosophy should be conceived as a critique of language rather than as anything else. As often pointed out, ours is an age in which man is becoming increasingly word conscious; an age, when the original, formative power of language has come to hold the central position in our conception of human mentality, and when even the man in the street has realized with astonishment how easy it is to be deceived and misled by words. Such being the case, it is no cause for wonder that the “magical” power of the word has come to occupy the focus of attention of all those who would explore the nature of the human mind and the structure of human knowledge.

On the other hand, it must be admitted that the subject bristles with difficulties and uncertainties. The very notion of “magic” or “the magical” which seems, on the face of it, clear and simple like anything, involves one in strange perplexities as soon as one wants to work it out in detail in relation to the more fundamental aspect of linguistic activity. For the consideration of this problem will force one sooner or later into assuming the formidable task of elucidating the deep-lying magical implications of linguistic “meaning” itself.

Indeed, it is easy to enumerate and to describe various types of verbal superstition as actually encountered among savage peoples throughout the world, nor is it so difficult to bring to light the theoretical principles underlying these strange customs and habits. Grave difficulties present themselves if we attempt to go down to the hidden fountainhead of all word-magic, if we, in other words, want to trace back the apparently organic connection between magic and language to its ultimate source. However, this too must be attempted at all costs. So the author proposes to examine anew this difficult but highly important problem in the latter half of the book, and the author shall advance there a working hypothesis regarding the prehistory of human language, which will help us move a step towards clearness in conceiving the fact of the magical overtone of all linguistic meaning.

By way of a beginning, let us give passing attention here to the problem of the stratification of speech functions and try to follow the life history, so to speak, of the magical use of language as opposed to all other uses, from the earliest imaginable ages down to the present day. It will serve, the author’s hope, as a general picture, which may profitably be kept in mind in order that my argumentation throughout this book might appear in the right perspective.