Kawah Buku > Biography and Autobiography > Living in a Time of Deception 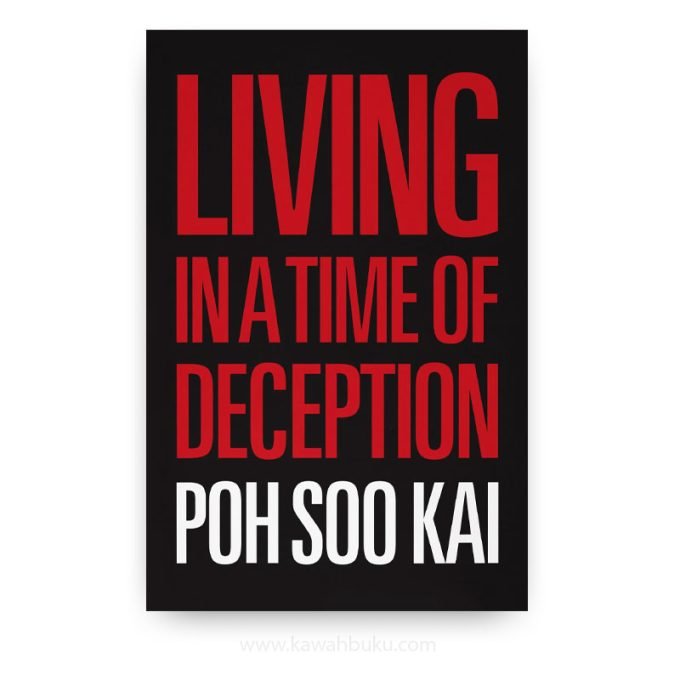 Living in a Time of Deception

POH SOO KAI (b. 1930 – ) was a Singaporean medical doctor, politician, and political prisoner. He was a founding member of the University Socialist Club and the People’s Action Party, Singapore.

Living in a Time of Deception is a long-awaited memoir of Poh Soo Kai, a victim of state repression and having had to spend a total of 17 years in jail without trial in Singapore. This memoir not only challenges the official interpretation but also rewrites part of Singapore history. In confronting Lee Kuan Yew and his official historiographers, the author made use of Lee’s memoirs as well as official People’s Action Party (PAP) publications. The author then did what researchers usually do and visited the UK National Achieves at Kew and unearthed declassified documents, from 1956 to 1963.

The materials were reports of colonial officials in Singapore and Malaya, as well as reports made by Special Branch to the Colonial Office. The disparity between such revelations and history as written by the PAP and its supporters was devastating for the latter. The brutal truth finally came out. The fates of political prisoners in Singapore are worse than those of common criminals. Convicted criminals are sentenced by a trial court while political prisoners, under the Internal Security Act, can be imprisoned without trial for two years, with a renewed sentence thereafter. The Act has been abused by the state and has usually been employed against left-wing critics.

Indeed, in her introduction to the book, historian Hong Lysa points out that “… history continues to be considered by the state as one of the most sensitive of subjects, which it has to dictate and control”. She continues: “A government that controls the writing of history as vociferously and menacingly as Singapore’s indicates just how much it has to justify its use of the Internal Security Act to come into power and to maintain its rule”. This “historical memoir,” a term preferred by Poh Soo Kai, is part of the suppressed histories of Singapore, as well as that of Southeast Asia.

Born to a rich family, Poh was educated in elite schools. His grandfather, Tan Kah Kee, was a patriotic businessman who supported Mao Tse Tung and was later appointed a member of the National People’s Congress and to other positions in government. In the pre-World War II period and up to 1949, Tan was a significant leader of the Chinese community in Singapore, President of the Chinese Chamber of Commerce and a philanthropist in both Singapore and China. According to Poh, despite his patriotism, his grandfather was subjected to the whims of Chinese and Singaporean leaders and their political struggles: “Political leaders in Singapore and in China have continuously tried to define his legacy to support their respective policies”.

The author was also subject to the political whims of the PAP government in post-colonial Singapore. He was arrested in February 1963, during Operation Coldstore, charged with involvement in allegedly subversive activities aimed at establishing a communist state. The charge sheet stated that his grandfather was a communist, thereby linking ancestral affinity to communism. By 2015, his grandfather’s “communism” seems to have been forgotten. The Singaporean authorities even named an MRT Downtown Line station after him.

He enrolled in the medical faculty of the University of Malaya and co-founded the University Socialist Club (USC), together with others including Wang Gungwu. To propagate socialist views, the periodical Fajar was launched by the USC in March 1953. It became an important publication in the anti-colonial struggle and, later, against the repressive policies of the PAP. Fajar lasted a decade and was banned in 1963 for alleged sedition. It was also during this period that a British agent, by the name of Alex Josey, who became Lee Kuan Yew’s hagiographer, tried to infiltrate Fajar while working as a journalist, but failed.

The Fajar sedition trial, in which, after a hearing of just three days, the judge acquitted all defendants. The defence case was originally handled by Lee Kuan Yew, then taken over by D. N. Pritt, a famous anti-colonialist lawyer, who had successfully defended Ho Chi Minh’s extradition case in Hong Kong in the 1930s. By May 1954, the anti-colonial struggle in Singapore reached a new height. Trade union militancy expanded. Some of the big left-wing unions were Singapore Factory and Shop Workers’ Union (SFSWU), led by Lim Chin Siong, and the Singapore Bus Workers’ Union, led by Fong Swee Suan. USC members such as James Puthucheary and Sydney Woodhall, among others, became union officials. At the same time, the author and some other USC members became founding members of PAP.

ABBREVIATIONS AND ACRONYMS
PREFACE
CHRONOLOGY OF EVENTS
PHOTOGRAPHIC RECORD
INTRODUCTION BY HONG LYSA
‘Mr Lee Kuan Yew told the truth’
Unravelling the deceptions in The Singapore Story
Merger, Malaysia and the memoirs of Lee Kuan Yew
Pursuing a trail
A doctor masquerading as a historian
A gift of History

2. CLUBBING DAYS
My school days
At the University of Singapore
The dawn of the University Socialist Club
A slap, a push
Fajar
Inside Fajar
A socialist lineage

3. FAJAR SEDITION TRIAL
May 1954
Enter DN Pritt QC
Miscalculations
International socialism
Where was the Soviet threat?
An imprint on my world

5. PLOTTING TOWARDS 1959: THE CONSTITUTIONAL TALKS
Marshall pushed out
The British position
The crackdown on the left
Lim Chin Siong’s Speech at Beauty World
Second constitutional talks
Lee’s trick up his sleeve’

8. MEDICINE AND ME
Surgery in those days
Medicine and politics

9. PLOTTING TOWARDS 1963: TRADE UNIONS AND POLITICAL DETAINEES
On the left: Lim Chin Siong and the trade unions
Formerly on the right: Ong Eng Guan and the Hong Lim by-election
Trapped in the ‘Unity of the Left’
The detainees issue
‘Plan to assassinate the PAP Leadership’
The PAP split
Drawing the line in the sand

10. FIXING THE BARISAN: THE MERGER SCHEME AND OPERATION COLDSTORE
The not-so-grand design
Passing the buck on mass arrests
Hanging in the balance
Fear and Confusion
The referendum
Operation Coldstore aborted
From the horse’s mouth

11. RUSHING IN AND OUT OF MALAYSIA
Mutual animosity: Lee and the Socialist Front
Mutual mistrust: Lee and the Alliance Party
The Battle over Merger: The Federation vs Singapore
Staging independence
Chronicle of an end foretold

13. LEAVING NONE UNSCATHED: INDEFINITE IMPRISONMENT WITHOUT TRIAL
On detention without trial and solitary confinement: The City Hall ‘riots’
Resistance in prison
Comrades and sparring foes
The Barisan after the September 1963 general election
Leaving none unscathed
An appreciation of Lim Chin Siong