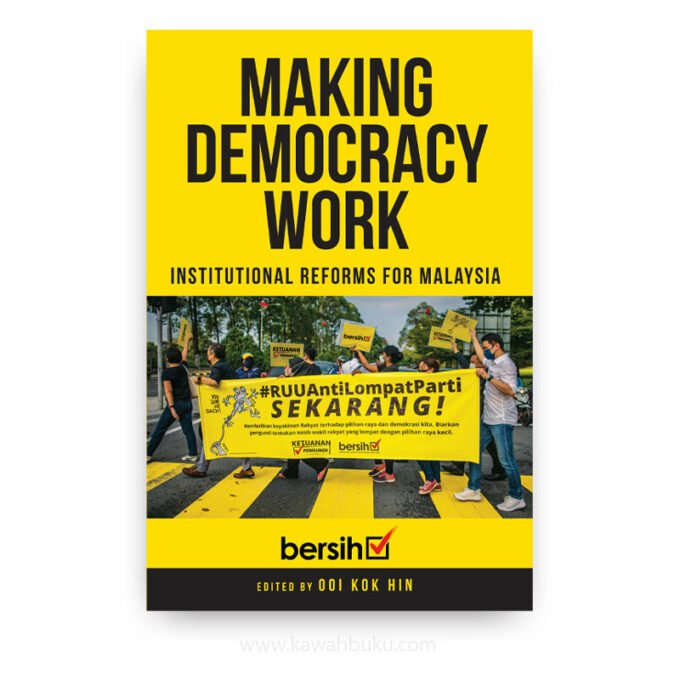 Making Democracy Work: Institutional Reforms for Malaysia study and propose recommendations in four key areas: electoral reforms, parliamentary reforms, public office appointments, and political finance. This book is a compilation and abridged versions of some of the research reports that Bersih commissioned from 2020 to 2022. The objective: introduce the problems that Malaysian are facing, make comparative studies of how other countries handle similar problems, and make the best recommendations for Malaysia. The Bersih leadership and secretariat worked closely with the authors to arrive at positions that are congruent with local context and our ideals of what constitute a strong, stable and mature democracy.

The real impetus for Bersih to commission the research reports, 19 at the time of writing, was the political coup that took place in February 2020, famously or infamously called the Sheraton Move, that brought down the Pakatan Harapan federal government. The waves of defections of elected representatives not only led to the change of the federal government at that time, but also contributed to the subsequent collapse of seven state governments, mainly due to party-hopping. The Perikatan Nasional government of Muhyiddin Yassin that replaced PH was itself brought down after 17 months by a group of MPs who withdrew their support for him. Such political turbulence took place at a time when we were battling the Covid-19 pandemic, which made it even more imperative to have a stable and functioning government.

Right after the Sheraton Move, Bersih called for the enactment of the recall procedure to deal with the political instability caused by party-hopping, but Bersih was also cognisant that there are many factors that contributed to this phenomenon in Malaysia. There are the ‘carrot’ incentives, such as appointments to key positions in the government or to one of the many government-linked companies and statutory boards that comes with perks like lucrative pay packages and power to influence the awarding of contracts. Then, there are the ‘stick’ incentives to align oneself with the government of the day. The power of the prime minister to appoint heads of investigative and prosecutorial agencies such as the Malaysian Anti-Corruption Commission and the attorney-general who also acts as the public prosecutor, has caused some elected representatives to throw their support for the prime minister and some of these have seen their cases dropped or charges were withdrawn.

The institutional reforms that Bersih is advocating seek to remove, or at least reduce, both ‘carrots’ and ‘sticks’ by enacting laws that redistribute the power of the prime minister to the Parliament and to the rakyat. This book’s recommendations also seek to enable government backbenchers and opposition representatives to play a more effective and meaningful role in providing check and balance on the executive. Bersih also pushes for more consultative, inclusive, transparent and accountable processes in key appointments and lawmaking. Institutional reforms to strengthen key institutions and agencies are not only necessary, but are prerequisites if we are to effectively address the “bread and butter” issues and deal with the debilitating effect of systemic corruption that has held us back from becoming a developed nation. Without strong institutions to curb abuses by politicians and to demand accountability and performance by both elected and nonelected public servants, Malaysia would constantly be locked in a downward spiral of corruption scandals, power grabs, toxic politics and widening inequalities. Malaysia need stable and functioning governments to implemeni economic, education and social reforms, and to start confronting the global climate crisis.

6. Party-hopping and Its Remedies
– Wong Chin Huat and Wo Chang Xi

7. A Framework for a Shadow Cabinet
– Maha Balakrishnan

15. Reforming the Office of the Attorney-General and the JLS
– Andrew Yong