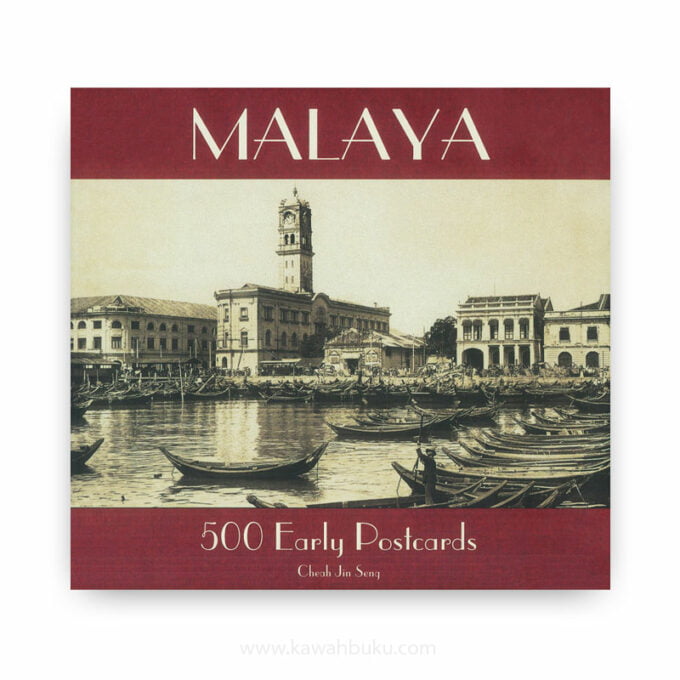 Malaya: 500 Early Postcards presents a wide-ranging collection of views of the Malay Peninsula through picture postcards from the late 19th century to the middle of the 20th. The country’s changing landscapes and townscapes are vividly captured in a series of postcard galleries: the Federated Malay States (Pahang, Perak, Selangor and Negri Sembilan), the Unfederated Malay States (Johore, Trengganu, Kelantan, Kedah and Perlis), and two of the Straits Settlements (Penang and Malacca). The book also traces key developments in the early production of picture postcards in Malaya. Based on the personal collection of the author, Malaya: 500 Early Postcards is an important source of information on postcards from a collector’s point of view. It is also a richly informative visual document of a formative period in Malaysia’s history. This book is arranged on a geographical basis, and the main galleries are complemented by an additional chapter on picture postcard booklets, multiview and panoramic picture postcards. Various philatelic aspects of picture postcards are also discussed.

The earliest known of any postcards is the private cards, known as the “Lipman’s Postal Cards”, that were printed in the United States in 1861. Austria is credited with the production of the first official (governmental) postcard in 1869, following a proposal put forward by Dr Heinrich von Stephan, the director of its postal service, in 1865. The Straits Settlements introduced the first postcard in 1879.

A distinction can in fact be made between two types of postcards: the postal stationery postcard and the picture postcard. The first picture postcard was produced in Britain in 1894. By the end of the 19th century, picture postcards were produced almost worldwide. In view of the colonial history shared by these two countries, it is not surprising that the history of picture postcards in Malaya, in general, is similar to that in Singapore.

Under the Universal Postal Union (UPU) regulations, the address side of the postcard was reserved for the sticking of the postage stamp, the writing of the name of the addressee and the destination address. This “Undivided-Back” picture postcard format has no central vertical line. The obverse side (picture or view side) has either one picture or multiple vignettes occupying a portion, with the remaining empty space reserved for the message.

Postal rates varied according to the destination and period. For local addresses within the Straits Settlements and the Federated Malay States, the rate started at 1¢ in 1899 and rose to 4¢ by 1941. The British Empire rate started at 3¢ and rose to 4¢, with the postal rates for the rest of the world moving from 3¢ to 8¢ during over the same period. The 3¢ rate was the most common rate for British colonies. During the early years, using the “printed matter” rate was a cheap way to send picture postcards. Hence a lot of picture postcards exist with the word “POSTCARD” deleted and replaced by other terms such as “PRINTED MATTER”, “PRINTED PAPER”, or even “BOOK POST”. With the advent of regular air services in the 1930s, special airmail rates for picture postcards were introduced. However, these rates were much more expensive than printed matter rates and were not often used.

The period 1906-1914 might be considered the “Golden Era of Picture Postcards” with a rise in the number of cheap privately printed picture postcards, and postal rates. It ended with the outbreak of World War I.

G.R. Lambert opened his photographic studio in 1875, but he left Singapore in 1885 and, from 1885 to 1905, the firm was managed by another German, Alexander Koch. From 1905, the firm was managed by H.T. Jansen, also German. Their head office was in Singapore, but they had a branch in Kuala Lumpur as well. It was in this branch that many picture postcards of Johore, Kuala Lumpur and Perak were produced.

Raphael Tuck & Sons had been established in London in 1806 and the firm was the “Art Publishers to the King and Queen”. They produced numerous multicolour “Oilette” picture postcards of the “Wide Wide World’; these included several of Penang, Kuala Lumpur and Singapore.

Nakajima & Co., a firm based in Singapore, were artistic photographers who produced many photographic picture postcards of Penang, Malaya and Singapore. Rumour has it that they were spies for Japan prior to its invasion of Malaya and Singapore in 1941-2, for among their favourite subjects were strategic infrastructures such as bridges, roads, railways, rubber plantations and ports.

An Overview
Early History of Picture Postcards of Malay