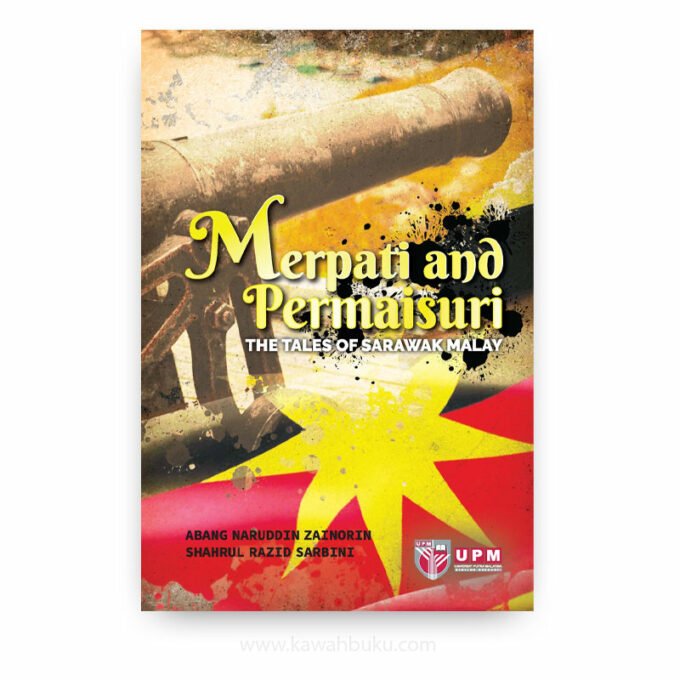 Merpati and Permaisuri: The Tales of Sarawak Malay

Merpati and Permaisuri: The Tales of Sarawak Malay documented the narrated histories and collection materials that brought the readers back to the earlier years of how it all began in Sarawak. This book has its own fantasy. The story of Datu Merpati will remain a tale if left untold and neglected. Bujang Temerlang, the mystical cannon is a legacy of legendary warrior, Datu Merpati. The cannon had been given by his son, who was born a sea dragon. It was given to enable Datu Merpati to defend himself should he got attacked by his foes. The cannon had been handed down from generation to generation, which is said to be sacred and has to be cared in accordance with traditional ritual practice. One of the two offspring of the cannon had disappeared due to negligence of the caretaker then. Bujang Temerlang is said to have surfaced from the sea on a sejadah, somewhere near Tanjung Datu when Datu Merpati sailed to search for a notorious pirate who had kidnaped his beloved wife, Datu Permaisuri and his daughter, Dayang Seri Bulan.

The sea dragon saved Datu Permaisuri and her daughter from drifting aimlessly in the open South China Sea and brought the boat to safety in Brunei waters. She was saved by the kind hearted Kedayan fishermen and lived among them until her daughter was married to her nephew from Johor. Her nephew eventually became the Sultan of Brunei. The royal couple were blessed with several children. Three of their younger sons, who were not entitled to hold any ministerial portfolio in the Sultanate, Vventured out southward to establish their respective settlement.

Datu Merpati’s son, Merpati Jepang, was appointed to replace him as the headman of Santubong and hence the people of Sarawak are originally, mixed-blood generations from Java, Johor, Brunei and Kalimantan Indonesia. Thus, the legend of Datu Merpati is a significant story that the future generations of Sarawak should cherish. He is remembered by naming the western-most tip of Borneo Island as Tanjung Datu as he had made the place as an outlook for vessels passing through heading for Sambas, and other southern provinces of Kalimantan Indonesia, and to Java. Likewise, two roads in Miri, Jalan Merpati and Jalan Permaisuri further attest their physical presence in the northern part of Sarawak and Brunei.

Datu Permaisuri passed away and was buried in Miri among the ordinary people, as this was her wish and not in elegantly built monument, Datu Merpati’s resting place, on the other hand, remains a mystery. Some say that he was laid to rest underneath a huge rock boulder at the tip of Tanjung Datu. However, a shaman of Telok Melano in Lundu District said that he was buried in Tanjung Datu National Park. He knows the exact spot but refutes that he can only reveal the place to the descendants of Datu Merpati Jepang as the grave is heavily guarded by genies. Being a shaman, he knows whether one is the descendant of Datu Merpati Jepang or not. But there are people who still go to the purported burial ground at Tanjung Datu cape bringing offerings to grant them of their wishes.