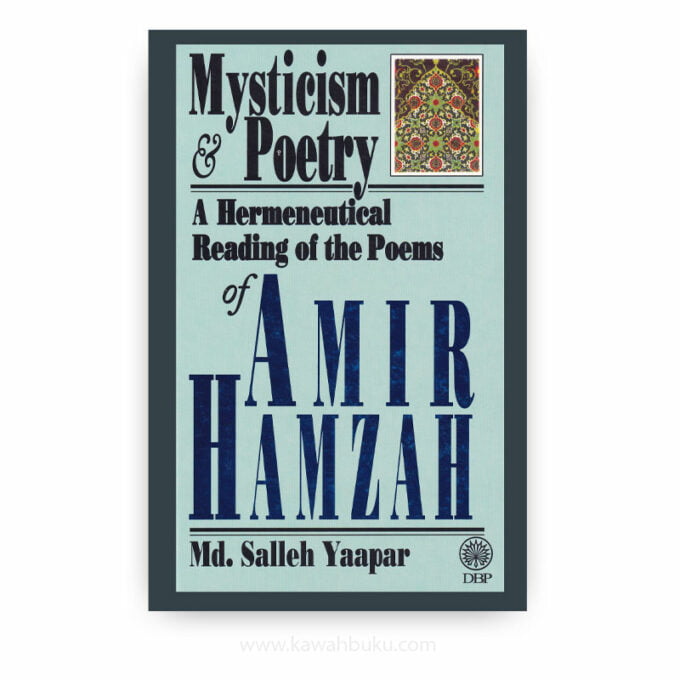 Mysticism and Poetry: A Hermeneutical Reading of the Poems of Amir Hamzah

MD. SALLEH YAAPAR (b. 1946 – ) is a Malaysian scholar of comparative literature and a professor of the School of Humanities at the University Sains Malaysia. He is the head of the Institute of Language and Literature of Malaysia and the holder of the European Chair of the Malay studies at Leiden University.

Mysticism and Poetry: A Hermeneutical Reading of the Poems of Amir Hamzah is a critical interpretation and appraisal of the poems of the celebrated Indonesian poet Amir Hamzah as expressed in Buah Rindu (Fruits of Longing, 1928-1935) and Nyanyi Sunyi (Songs of Solitude, 1937). Its primary aim is to understand fully the literary and religious characteristics of the texts and to evaluate their achievements, thus determining the real stature of the poet.

Using the hermeneutical approach, the study is carried out in a comprehensive and integral manner, i.e., by interpreting the poems in relation to the poet’s biographical, literary and cultural background, as well as to the Oriental poems (the Bhagavad-Gita, the Rubā’īyāt of ‘Umar Khayyām, the “Song of Songs” etc.) which Amir Hamzah had beautifully rendered into the Indonesian language.

This study will examine and interpret Amir Hamzah’s original poems in relation to those poems which he translated from foreign sources so as to determine their relationship to religion, specifically mysticism or spirituality, as understood by the Muslims of Indonesia and the people of those lands from where Amir’s translations are derived. In order to do this, the study will appraise the characteristics of the poems in terms of their relationship to the mysticism of various traditions and temperaments. It will also compare and contrast these characteristics with those of the literary works which have been generally recognized as mystical, for instance, the poems of Ibn al-Farid, Hamzah Fansuri and Kabir.

The study reveals that the poems in Nyanyi Sunyi are clearly mystical in nature and are of ethereal quality. They are informed by various aspects and levels of mystical experiences and insights. At the same time, they bear the influences of the Quran as well as the writings of celebrated Sufi poets such as Ibn al-Farid, Jalal al-Din Rumi and Hamzah Fansuri. In fact, some of the poems in Buah Rindu are, also high in quality and deal with mystical love. These poems seem to prefigure those in Nyanyi Sunyi.

As for the Oriental poems which Amir Hamzah had translated, they are basically similar to his poems in Nyanyi Sunyi, and the very much reflect his own mystical quest. The book affirms the eminent standing of Amir Hamzah as a poet and of his poetry which occupies a signal position in modern Indonesian as well as Malaysian literature,

CHAPTER II: CULTURAL AND LITERARY BACKGROUND TO THE POETRY OF AMIR HAMZAH

CHAPTER VI: THE MYSTICAL OQOUEST WITHIN AN EXTENDED HORIZON: ORIENTAL POEMS TRANSLATED BY AMIR AND THEIR AFFINITIES WITH HIS POETRY

CHAPTER VII: THE SIGNIFICANCE OF AMIR’S POETRY AND ITS IMPACT ON INDONESIAN AND MALAYSIAN LITERATURE