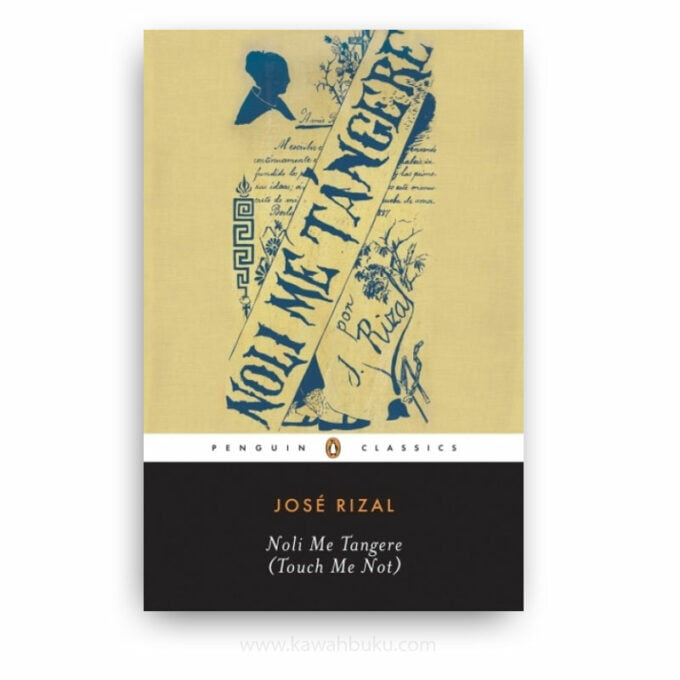 Noli Me Tangere (Touch Me Not)

JOSÉ RIZAL (b. 1861 – d. 1896) is known as the hero of the Philippines and the greatest champion of Filipino nationalism and independence. He angered the Spanish authorities with Noli Me Tángere and its sequel, El filibusterismo and was executed.

Noli Me Tangere (Touch Me Not) is an 1887 novel by José Rizal during the colonization of the Philippines by the Spanish to describe the perceived inequities of the Spanish Catholic friars and the ruling government. In more than a century since its appearance, José Rizal’s Noli Me Tangere has become widely known as the great novel of the Philippines. A passionate love story set against the ugly political backdrop of repression, torture, and murder, “The Noli,” as it is called in the Philippines, was the first major artistic manifestation of Asian resistance to European colonialism, and Rizal became a guiding conscience—and martyr—for the revolution that would subsequently rise up in the Spanish province.

José Rizal-Mercado y Alonso, as his name emerges from the confusion of Filipino nomenclature, was of Malay extraction, with some distant strains of Spanish and Chinese blood. His genealogy reveals several persons remarkable for intellect and independence of character, notably a Philippine Eloise and Abelard, who, drawn together by their common enthusiasm for study and learning, became his maternal grandparents, as well as a great-uncle who was a traveler and student and who directed the boy’s early studies. Thus from the beginning, his training was exceptional, while his mind was stirred by the trouble already brewing in his community, and from the earliest hours of consciousness, he saw about him the wrongs and injustices which overgrown power will ever develop in dealing with a weaker subject.

One fact of his childhood, too, stands out clearly, well worthy of record: his mother seems to have been a woman of more than ordinary education for the time and place, and, pleased with the boy’s quick intelligence, she taught him to read Spanish from a copy of the Vulgate in that language, which she had somehow managed to secure and keep in her possession—the old, old story of the Woman and the Book, repeated often enough under strange circumstances, but under none stranger than these. The boy’s father was well-to-do, so he was sent at the age of eight to study in the new Jesuit school in Manila, not however before he had already inspired some awe in his simple neighbors by the facility with which he composed verses in his native tongue.

He began his studies in a private house while waiting for an opportunity to enter the Ateneo, as the Jesuit school is called, and while there he saw one of his tutors, Padre Burgos, haled to an ignominious death on the garrote as a result of the affair of 1872. This made a deep impression on his childish mind and, in fact, seems to have been one of the principal factors in molding his ideas and shaping his career.

That the effect upon him was lasting and that his later judgment confirmed him in the belief that a great injustice had been done, are shown by the fact that his second important work, El Filibusterismo, written about 1891, and miscalled by himself a “novel,” for it is really a series of word-paintings constituting a terrific arraignment of the whole régime, was dedicated to the three priests executed in 1872, in these words: “Religion, in refusing to degrade you, has placed in doubt the crime imputed to you; the government, in surrounding your case with mystery and shadow, gives reason for belief in some error, committed in fatal moments; and all the Philippines, in venerating your memory and calling you martyrs, in no way acknowledges your guilt.” The only answer he ever received to this was eight Remington bullets fired into his back.

Noli Me Tangere (Touch Me Not) at the time the work was written had a peculiar fitness as a title. Not only was there an apt suggestion of a comparison with the common flower of that name, but the term is also applied in pathology to malignant cancer which affects every bone and tissue in the body, and that this latter was in the author’s mind would appear from the dedication and from the summing-up of the Philippine situation in the final conversation between Ibarra and Elias. But in a letter written to a friend in Paris at the time, the author himself says that it was taken from the Gospel scene where the risen Savior appears to the Magdalene, to whom He addresses these words, a scene that has been the subject of several notable paintings.

In this connection, it is interesting to note what he himself thought of the work, and his frank statement of what he had tried to accomplish, made just as he was publishing it: “Noli Me Tangere, an expression taken from the Gospel of St. Luke, means touch me not. The book contains things of which no one up to the present time has spoken, for they are so sensitive that they have never suffered themselves to be touched by anyone whomsoever. For my own part, I have attempted to do what no one else has been willing to do: I have dared to answer the calumnies that have for centuries been heaped upon us and our country. I have written of the social condition and the life, of our beliefs, our hopes, our longings, our complaints, and our sorrows; I have unmasked the hypocrisy which, under the cloak of religion, has come among us to impoverish and to brutalize us, I have distinguished the true religion from the false, from the superstition that traffics with the holy word to get money and to make us believe in absurdities for which Catholicism would blush, if ever it knew of them. I have unveiled that which has been hidden behind the deceptive and dazzling words of our governments. I have told our countrymen of our mistakes, our vices, our faults, and our weak complaisance with our miseries there. Where I have found virtue I have spoken of it highly in order to render it homage; and if I have not wept in speaking of our misfortunes, I have laughed over them, for no one would wish to weep with me over our woes, and laughter is ever the best means of concealing sorrow. The deeds that I have related are true and have actually occurred; I can furnish proof of this. My book may have (and it does have) defects from an artistic and esthetic point of view—this I do not deny—but no one can dispute the veracity of the facts presented.”

A Note on the Translation