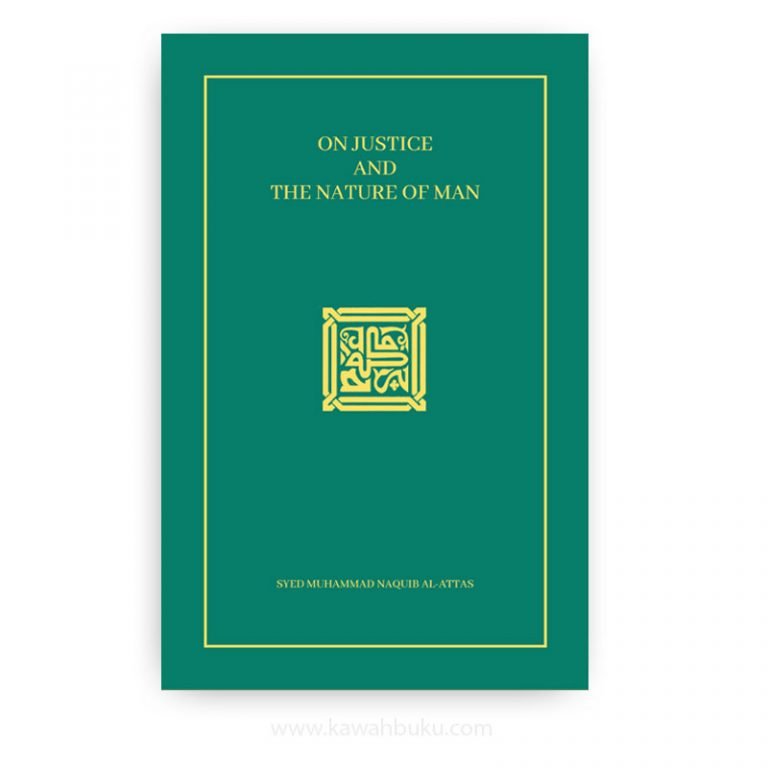 On Justice and the Nature of Man

SYED MUHAMMAD NAQUIB AL-ATTAS (b. 1931 — ) is a former Founder-Director of the International Institute of Islamic Thought and Civilization (ISTAC).

The author has selected from the Holy Qur’ān āyah 58 of sūrah al-Nisā’ and āyahs 12-14 of sūrah al-Mu’minūn and written a Commentary, entitled On Justice and the Nature of Man on them because he believes that the latent truths they convey on justice and the nature of man have not been elicited from them before in such way as to reveal the essential meanings intended by them. There are of course many āyahs in the Holy Qur’ān arranged in different places in the same or in different surahs. But among them all there will be one āyah (e.g. 58 of al-Nisā’), or one series of āyahs (e.g. 12-14 of al-Mu’minūn), to which the various meanings conveyed in all āyahs on the same subject converge. This one āyah, and the ones in complete series are then by definition fundamental because they are the original sources of meaning from which the others are derived. They disclose to our understanding truths not realized before.

The interpretation and explanation given in this Commentary on these āyahs of the Holy Qur’ān is our answer to the greatest challenge to our true identity as man, i.e. as insān, posed by the evolutionist and positivist theory of man, i.e. as Homo sapiens, set within the framework of anthropology and the worldview of naturalism—a theory taught as if it were a fact in the schools and universities of the world. They say that man is a physical being by nature; that in the Three Kingdoms of Nature, the animal, vegetable, and mineral kingdoms, man belongs to the animal kingdom because man is not different in kind from animals, but different only in degree; that man is not a special creation, but is a new species originating from a species of anthropoids that has gradually undergone an evolutionary process of natural selection in biological development from earlier forms that go back to a common ancestor; that through this process of natural selection new species arise one of which is man, the Homo sapiens of today.

In this Commentary on these āyahs of the Holy Qur’ān, the author show by eliciting from them the latent truths about the nature of man that man is not a genus nor a species, but a new and a special creation; that man is created as a merging of the physical and the spiritual natures into a single being at once as bashar and insān, both a new and a special creation; that man’s true and real nature is spiritual, an articulate soul, to which state of being he will be returned on the Day of Judgement after his determined term of probation on earth; that man, even in his bashariyyah aspect, i.e. his physical, biological nature, is clearly different in kind from animals and belongs to a separate kingdom of his own as God’s vicegerent i.e. khalīfah on earth placed over and above the Three Kingdoms of Nature; that the coming of man on earth is to accomplish God’s purpose for man.

The author infer from what is revealed in the Holy Qur’ān about man and the universe in which he lives, that the creation and placing of the planet earth aeons ago, and its evolution in the sense of the unfolding of events in succession on a principle of order, including that of the forms of life on it, is the unfolding of God’s plan preparatory to the coming of man. Everything, including the alternate process of extinction and continuance of the forms of life on earth, is a new creation according to the principle of God’s Renewal of Creation. Man is a new creation, but he is also a special one.

Some of the author’s interpretation and explanations of justice and knowledge set forth in this Commentary have been said before by him in the earlier writings. But then they served different contexts of discourse. Now here the author has gathered them together in close-knit fashion with new meanings to reveal the intimate connection of justice with the nature of man as individual. Hence the formulation of the title of this Commentary, On Justice and the Nature of Man: A Commentary on Sūrah al-Nisā’ (4):58 and Sūrah al-Mu’minūn (23):12-14.