Kawah Buku > History > Malaysia > One Crowded Moment of Glory: The Kinabalu Guerillas and the 1943 Jesselton Uprising 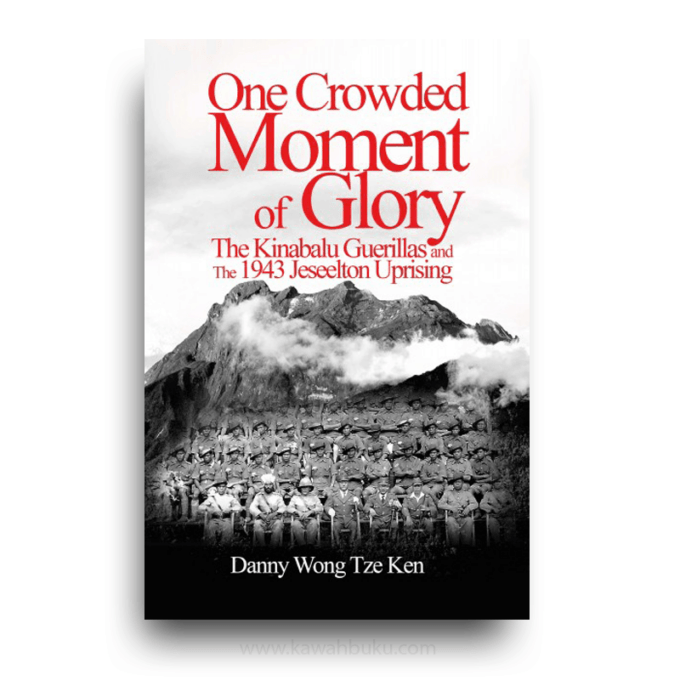 One Crowded Moment of Glory: The Kinabalu Guerillas and the 1943 Jesselton Uprising

DANNY WONG TZE KEN is a Professor of History at the University of Malaya.

One Crowded Moment of Glory: The Kinabalu Guerillas and the 1943 Jesselton Uprising is an attempt to provide an overview of the Jesselton Uprising of 1943 by re-examining existing works as well as highlighting information and sources that have surfaced in the past 30 years. These sources include personal accounts, both published and unpublished, and interviews. The study has also benefited from the recently declassified documents on war crime trials and those related to the Service Reconnaissance Department (SRD) operations in Southeast Asia. Newly available North Borneo Secretariat files in the Sabah State Archives provided long-inaccessible information on the aftermath of the Kinabalu Guerrillas and the war in Sabah, including the plight of many families of those killed for their involvement in the uprising.

The Jesselton Uprising, however, was a response to Japanese rule entirely from local civilians, fermented locally, and received little external support. This resistance movement is known as the Kinabalu Guerrillas.

On the night of 9 October 1943, a group of young men launched an armed attack on Japanese military installations in Jesselton (present-day Kota Kinabalu). The uprising, commonly known locally as the Double-Tenth Rebellion or Albert Kwok’s Rebellion (the Japanese called it the Api Incident, Api being the local name of Jesselton), was one of the most momentous events in Sabah’s history. It changed the lives of many and affected the fortunes of numerous families who lost their breadwinners.

Although the uprising did achieve its immediate goal in briefly freeing Jesselton from Japanese rule, it ultimately resulted in a brutal Japanese reprisal against the local population. Thus, the uprising should also be seen as the turning point in Japanese policy towards the people of Sabah and British Borneo.

The Jesselton uprising resulted in the Japanese 37th Army Headquarters being transferred from Kuching to Jesselton in 1944. In turn, the Allied forces’ aerial bombing of major towns and settlements in Sabah to destroy the 37th Army brought massive destruction to the state, which had few parallels in other parts of Southeast Asia.

Coupled with this was a large number of people killed by the Japanese in the period from the uprising until the closing stages of the war. In contrast, Kuching, the original headquarters of the 37th Army, was spared severe aerial bombardment and therefore remained largely intact.

The uprising left a lasting legacy in the memories of the people of Sabah. It also influenced subsequent events in the state, as well as the manner in which the past is recognised and remembered in Sabah and the country. The revolt was one of the few anti-Japanese movements in Southeast Asia led entirely by civilians in occupied territory.

The multi-ethnic nature of the uprising is probably its most important legacy and for this reason, the Kinabalu Guerrillas and the rebellion were remembered and commemorated first by the returning British colonial administration and sustained after independence. The Petagas War Memorial with the annual remembrance ceremony on 21 January is the only war memorial in Malaysia that has been continuously commemorated to honour the sacrifice of the resistance movement since the war.

It is hoped that through this study Several questions raised by earlier research can be answered. These include the reasons behind the launch of the uprising, the set-up of the Kinabalu Guerrillas, the possibility of a second uprising, and an assessment of the after-effects of the uprising. It is hoped that One Crowded Moment of Glory: The Kinabalu Guerillas and the 1943 Jesselton Uprising will put the uprising in its appropriate context in the history of Sabah and in the wider context of World War II in Southeast Asia.

Be the first to review “One Crowded Moment of Glory: The Kinabalu Guerillas and the 1943 Jesselton Uprising” Cancel reply