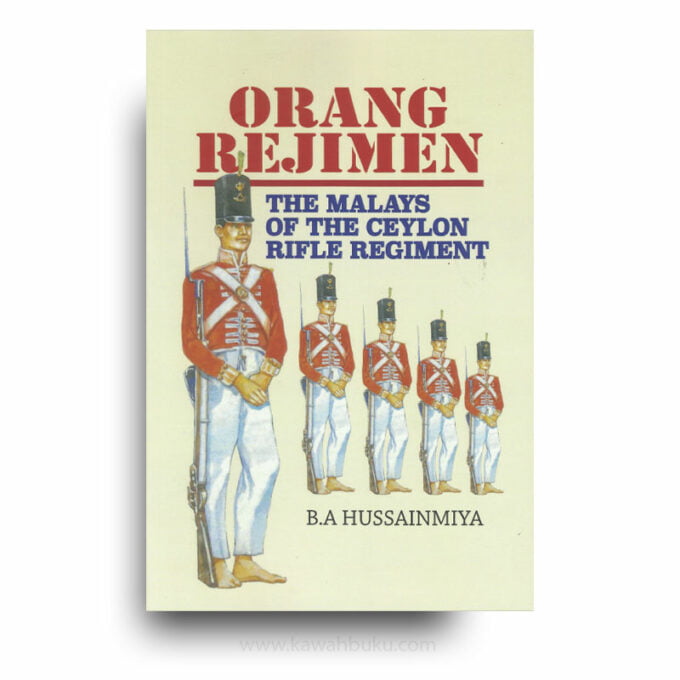 Orang Rejimen: The Malays of the Ceylon Rifle Regiment

B.A. HUSSAINMIYA is a Visiting Professor at the Southeastern University of Sri Lanka (SEAUSL).

Orang Rejimen: The Malays of the Ceylon Rifle Regiment highlights the induction of the Malays into the first regimental military service and the consequent developments which shaped their own outlook on life, attitudes and cultural ethos. More than half a century has elapsed since Reimers, a renowned archivist made the remarks about the paucity of research on the Malay community in Sri Lanka. Notwithstanding some minor amateur attempts to unravel their history, little progress was made by way of serious scholarly research.

A contrast can be seen here in the case of the South African Malays, on whom are written a countless number of academic treatises, books, monography, theses and research articles. Who are the Sri Lankan Malays? Where did they come from? How and why did they persist in maintaining their communal identity? These questions have never been on their history and provide a pleasantly readable account of their origins and evolution on the island of Sri Lanka.

Of these cultural minority communities who have made Sri Lanka their home, the case of the Malays is very remarkable and deserves serious study. Unlike other marginal population groups, the Malays are still identified as a distinct statistical category in official government documents. The other minorities are usually lumped together as ‘others’ and rarely identified by their ethnic nomenclature. Where ‘others’ have become a less distinct numerical group due to assimilation and intermarriage with the rest of the population, the Malays have managed to retain their separate ethnic-religious identity despite many odds over a period of more than three hundred years, since their ancestors first set foot on the island.

Currently, Malay is a term commonly used in South-east Asia to denote the people living in the Malaysian Peninsula and those in the adjoining areas in the archipelago who claim a common Malay ancestry. Malaysian law also requires a Malay to be a Muslim by religion. However, judging by their ancestry, so-called Sri Lanka ‘Malays’ have a greater claim to being called ‘Indonesians’ or ‘Javanese’ than ‘Malay’ or ‘Malaysian’. Nonetheless, the immigrants from the east have been recognised by their fellow citizens as Malays throughout the past. In Sri Lanka, this term was commonly applied to those Muslim settlers who originated from the eastern Archipelago as well as the Malay Peninsula.

The local people know them as Ja Minussu (people from Java is Sinhala) and Java manusar (in Tamil), names indicative of their one-time origin from the island of Java. The (Muslim) Moors, their co-religionists, most of whom are relatively more familiar with the Malays, refer to them also as Malai karar (Malay people). The Malays are of course conscious of both ancestries when they refer to themselves as Orang Jawa (People of Java) and Orang Melayu (The Malay People).

Despite the recognition thus accorded to the Malays as a group, there exists no simple racial criterion by which an outsider may identify a Malay by any conspicuous physical characteristics. The Sri Lanka Malays are by religion followers of Islam, and because of this fact, they have closely intermingled with the dominant Islamic group, mainly the Moors through intermarriage and cultural exchange. This has resulted in the loss of typical ‘Malay’ features among the offspring of such marriages, making it difficult to recognize a Malay from a Tamil speaking Moor (or for that matter any other Sri Lankan) a fact which had been noticed as early as the beginning of the 19th century by Percival, a British Military Officer, who remarked, “Although they (Malays) intermarry with the Moon and other castes (6 particularly in Ceylon and by this means acquire a much darker colour than the natural to a Malay; still their characteristic features are so strikingly predominant.”