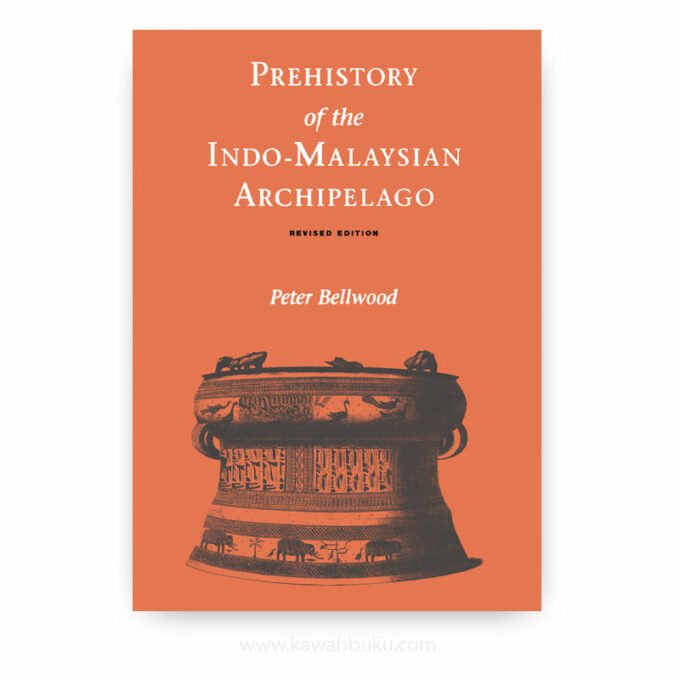 Prehistory of the Indo-Malaysian Archipelago

PETER BELLWOOD is Emeritus Professor of Archaeology at The Australian National University in Canberra. His current research is focused on global patterns of human migration throughout human prehistory, but his many years of archaeological fieldwork have been concentrated in Southeast Asia and Oceania.

This eBook was relisted and downloadable courtesy of the ANU Press.

Prehistory of the Indo-Malaysian Archipelago describes human prehistory from initial hominid settlement more than one million years ago to the eve of historical Hindu-Buddhist and Islamic cultures of the region. The archaeological record provides the central focus, but chapters also incorporate essential information from the paleoenvironmental sciences, biological anthropology, linguistics, and social anthropology. Bellwood approaches questions about past cultural and biological developments in the region from a multidisciplinary perspective. Historical issues given extended treatment include the significance of the Homo erectus populations of Java, the dispersal of the present Austronesian-speaking peoples of the region within the past 4,000 years, and the spread of metallurgy since 500 B.C. Bellwood also discusses relationships between the prehistoric populations of the archipelago and those of neighboring regions such as Australia, New Guinea, and mainland Asia.

The main area of interest includes all the islands of Indonesia and Malaysia (including the Malay Peninsula south of Thailand). The Philippines represents a direct extension northward of the Indo-Malaysian Archipelago, and although they lie outside the main area of concern of this book, they will merit extended comment in later sections. Indeed, the prehistory of Indonesia, in particular, is very closely tied with that of the Philippines, especially in its later stages during the period of expansion of the Austronesian-speaking peoples. Adjacent regions that will also require extended comment in some following sections include Taiwan, the countries of mainland Southeast Asia (especially Thailand and Vietnam), China (especially the southern half), and the Greater Australasian continent comprising Australia and New Guinea. The latter island, the western half of which is politically now a part of Indonesia, is not included in the Indo-Malaysian Archipelago as here defined.

As defined for the purposes of this book, therefore, the “core region” of the Indo-Malaysian Archipelago extends from about 7° north latitude (northern Peninsular Malaysia and Borneo) to 11° south (Sumba and Timor), and from the western tip of Sumatra to the Moluccas. The region is about 4,200 kilometers long from west to east, 2,000 kilometers from north to south, and supports about 1.8 million square kilometers of dry land, of which about 80 percent lies in Indonesia, with the remainder being in Malaysia (Peninsular Malaysia, plus the states of Sarawak and Sabah on Borneo) and Brunei.

The islands of this region differ greatly in size: Borneo covers 736,000 square kilometers (only slightly smaller than New Guinea), Sumatra comes next with 435,000 square kilometers, then Sulawesi (172,000), the Malay Peninsula (138,000 within Malaysia), and Java (127,000). The islands of western Indonesia are in general larger than those of eastern Indonesia (except for Sulawesi), and the reasons for this lie in the structure of the archipelago.

Preface to this Edition
Preface

1. The Environmental Background: Present and Past

4. Recent Indo-Malaysian Prehistory: According to the Languages

i. Language Families in Southeast Asia and the Westen Pacific
ii. Some Linguistic Concepts
iii. The Major Subgroups of Austronesian
iv. Dating the Austronesian Family Tree
v. Indo-Malaysian Linguistic Prehistory: Some Possibilities
vi. The Papuan Languages and Their Relationships with Indonesia

5. The Patterns of History and Ethnography

6. The Hoabinhians and Their Island Contemporaries

8. The Archaeological Record of Early Agricultural Communities in Peninsular Malaysia

i. The Significance of the Ban Kao Culture and the Malay Peninsular Neolithic

9. The Early Metal Phase: A Protohistoric Transition toward Supra-Tribal Societies

i. The Dong Son Culture of Northern Vietnam
ii. The Sa Huynh Culture of Southern Vietnam
iii. The Role of India
iv. Bronze Artifacts of Dong Son and Local Styles from the Sunda Islands and Peninsular Malaysia
v. The Slab Graves and Iron Industry of Peninsular Malaysia
vi. The Early Metal Phase in Sumatra, Java, and Bali
vii. The Early Metal Phase in East Malaysia and Eastern Indonesia