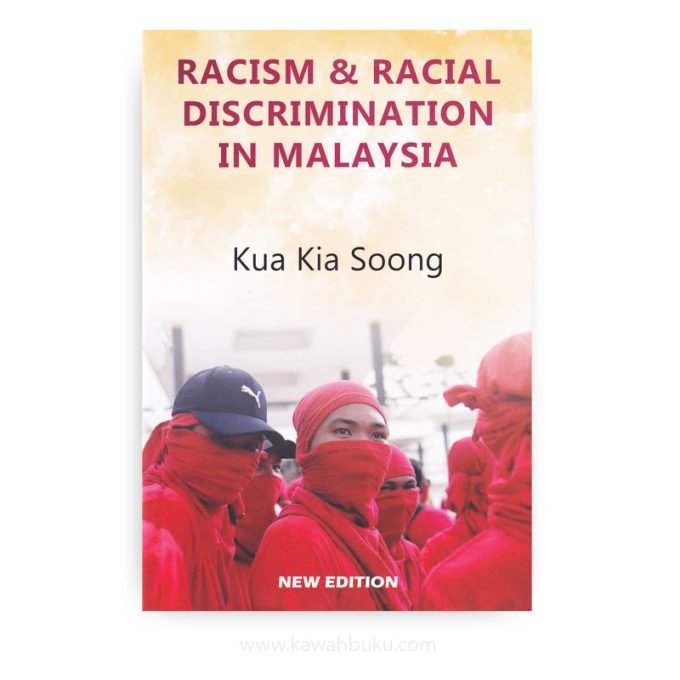 Racism and Racial Discrimination in Malaysia

Racism and Racial Discrimination in Malaysia highlighting the structural conditions that enable the crude manipulation of race to serve the economic interests of the ruling class under the Barisan Nasional, Pakatan Harapan and now Perikatan Nasional administrations. The chapters on the Emergency contain declassified documents from the British Public Records Office, which were made available after the 30-year secrecy rule was lifted. The author offers alternatives that are needs-based and thus race-free by doing away with such discriminatory policies, rent-seeking activities and patronage politics.

This book is about the politics of race and class in Malaysia. It seeks to highlight the mechanisms of oppression that maintain the conditions responsible for this crude manipulation of race by the state. The state explicitly uses racism as an ideological tool to retain the loyalty of a whole “Bumiputera” community. Race in Malaysia, has thus become a visible determinant of material force and fact. It is this evidence of racism that cuts across class and which has confounded crude “class theorists” who refuse to see the relevance of race in their analysis. Ever since the incursion of British colonialism and the linkage of the local economy to the global economy, political domination by the dominant class has been consistently maintained through racism and racial discrimination. “Communalism” is the term often used to refer to the division of the masses along “racial” lines in order to prevent them from acting as a unified political force.

The author traces the specific historical development of the Malaysian state from Independence, noting how its authoritarian and populist strands have been woven into a coherent ideology perpetuated until the present day, by the ruling Barisan Nasional and now the Pakatan Harapan coalition. The Malaysian state continues to use its formidable repressive apparatus through its control of the military and the police and its use of detention without trial as well as catch-all laws such as the Sedition Act. While the Internal Security Act was, from Independence, the favoured method of dealing with Opposition leaders and dissidents, detention without trial now continues in a different form.

The form of this domination has been organised, on the one hand around the denial of civil rights to the minority nationals—the Chinese, Indians and other “non-Bumiputeras”—and on the other, around the mobilization of the majority Malays and other “Bumiputeras” behind the demand for correcting the “racial imbalance” of the economy. Such a demand, of course, obscures the relations of class exploitation by portraying economic inequalities as the product of unequal distribution among the various ethnic groups. Thus, the Malaysian economy is still described as one that is “dominated by the Chinese” in order to justify racial discrimination packaged as “affirmative action”.

The ruling party UMNO prides itself on the supposedly “successful” affirmative action in favour of ‘Bumiputeras’. ‘Bumiputera’ literally means ‘princes of the soil’, the official epithet for Malays and other indigenous peoples but which perplexingly excludes the original peoples, the Orang Asli of Peninsula Malaysia. Nevertheless, not all Bumiputeras are treated equally. ‘Bumiputera’ policy has been the cornerstone of development plans since the inception of the New Economic Policy in 1971, a policy ostensibly designed to be of benefit to Bumiputeras as a whole. The reality is that the primary beneficiaries of the implementation of this policy are the new Malay ruling elite, strategically placed to reap the full benefits of this racially-based policy.

At the same time, within a state that is committed to capitalist development and privatisation, the New Economic Policy has also ensured that the non-Malay local and foreign capitalists, especially UMNO’s crony capitalists also gain from the policy. This class cohesion among the Malaysian ruling elite, of various ethnic origins, underpins the racist politics which have characterised Malaysian society since Independence.

Acknowledgements
Preface to the second edition
Foreword by Param Cumaraswamy

Chapter 6: MALAYSIA: LARGER COMMUNAL EQUATION
The neo-colonial solution in Singapore
Sarawak and Sabah in the racial equation
The bigger communalist pond
Struggle within the Malay ruling class
May 13, 1696: Coup against the Tunku
Summary

Chapter 8: THE STATE & SOCIAL CLASSES IN THE SEVENTIES
Contradictions within the ruling coalition
Accommodating the non-Malay capitalists
Growth of the Malay middle class
The working class
Conflict with metropolitan capitalists
Exploitation of workers and women
State repression and communalism
Summary

CONCLUSION: AFFIRMATIVE ACTION BASED ON NEED NOT RACE
The struggle for greater democracy