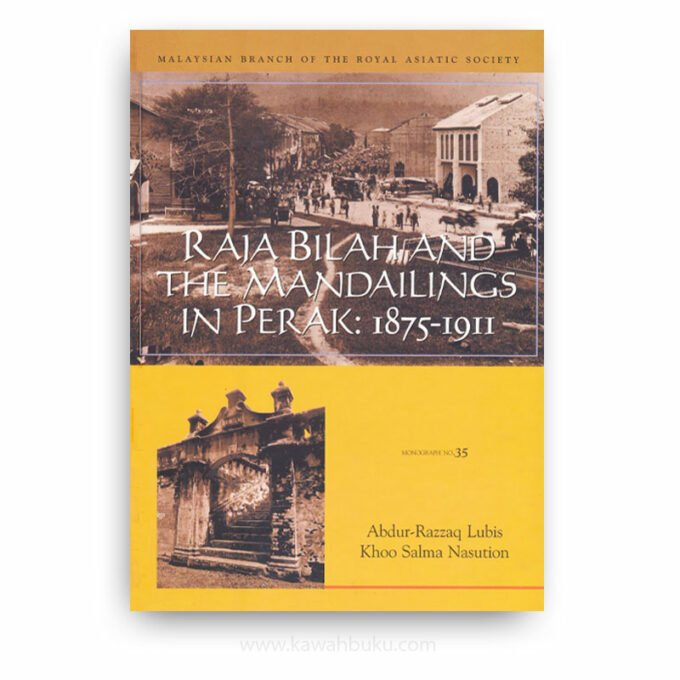 ABDUR-RAZZAQ LUBIS is a leading authority on the Mandailings in Malaysia.

Raja Bilah and the Mandailings in Perak, 1875-1911 focus primarily on the biography of Raja Bilah, a Mandailing leader in Perak during the formative period of British colonial expansion in the states of Perak, Selangor, Negeri Sembilan and Pahang in the Malay Peninsula. However, this biographical narrative is situated within and structured according to three broader historical themes in the history of Perak and the Melaka Straits, namely the history of Mandailing migration and movement between Sumatra and the Peninsula, the creation of the British colonial state, and the social, morphological and economic development of the state of Perak during this crucial period of colonial expansion. In encompassing the history of colonialism, diasporas and local or regional history, this book provides important new insights into ethnicity, politics and identity in Malaysian historiography.

It is one of the first comprehensive histories of the Mandailing communities in Malaysia in the English language. Most of the existing literature on the Mandailing deals with communities and regions in Sumatra, rather than the Mandailing diaspora and its broader geographical locus of movement and settlement. Merantau (migrating or sojourning) is a keyword in the identity-formation and social memory of many communities now resident in the Malay Peninsula, a region whose very history and politics were created by movement and mobile groups. The movement of the Mandailing has not received as much attention as that of other groups like the Bugis, Minangkabau and Javanese.

Raja Bilah and the Mandailings in Perak is unparalleled in the biographical details it presents. The focus is not solely on Raja Bilah, but also on his father and contemporaries. More importantly, it examines this history not only from the perspective of the Mandailings but also in terms of how members of various communities negotiated with Mandailing and non-Mandailing groups in their adaptations to a new political and economic environment brought about by British colonial expansion in Perak. It also charts their connections to the broader Islamic ecumene.

Another important contribution is that this book brings a different perspective to the history of colonial expansion and the ‘making’ of British Malaya between the 1870s and 1914, which has hitherto focused on the British administrators, the ‘Malay’ Sultan and his court, and the role of Chinese capital and labour in the opening up and modernization of these states. These early histories of what later came under the integrated structure of the Federated Malay States have tended to lump all non-European and non-Chinese Muslim groups under the rubric of Malayness, or at best ‘Sumatran’ or ‘Foreign’ Malays.

This book begins with the biographies of Raja Asal and Raja Bilah before the British Intervention of 1874, especially with regard to their tin-mining and pioneering activities in Perak, Selangor and Pahang, as well as their roles in the wars between the Malay court factions which also implicated Chinese kongsis. The authors then chart the subsequent recruitment of Mandailings as allies in the British pacification of Malay resistance after the murder of James W. W. Birch. In return for this assistance, Mandailing were granted important positions in the rudimentary administration erected by the British in the Kinta region, as well as patronage and loans for their mining and agricultural ventures. They came to be instrumental in the founding of several important mining settlements in Kinta, such as Papan, Gopeng and Kampar, the sites of the Kinta tin rush in the 1880s.

In addition to their administrative roles under this new system, Mandailing also undertook and financed tin mining, smelting and trading operations in Perak and Selangor. The book contains rich ethnographic descriptions of the mining methods used and their roles in the agricultural development of the Kinta Valley. More importantly, the authors go to great lengths to describe and explore the relationships, often on a personal or inter-family level, between Mandailing leaders and their Chinese and British counterparts, as well as their ties with Malay royalty in the state.

This book is also important in terms of the vast array of sources it has brought together. It is based primarily on a set of private papers known as the ‘Penghulu Papers‘, which were ‘family documents belonging to Raja Asal, Raja Bilah and Raja Ya’qub, that had been kept in the Rumah Besar in Papan, Perak. They are now housed in the National Archives of Malaysia, Perak Branch’. The skill with which these sources have been juxtaposed alongside official colonial documents, family chronicles and printed memoirs, and photographs from private and institutional sources is very refreshing and promises to appeal to both the academic world and the general reading public.

The traditional narrative approach of this book, as Khoo Kay Khim has pointed out in the preface, contains several important questions and statements about perspective, methodology and method in Malaysian historiography. It has undoubtedly set a high standard for scholarship on the writing of Malaysian local histories that is deserving of emulation.

The Padri War and Raja Bilah’s Migration to the Peninsula

‘Mines are in Full Swing’

Raja Bilah, The Penghulu of Papan

Resistance to Corvee Labour in Lambor

Tok Stia Raja and the Early Development of Batu Gajah

The Papan Mosque and Islamic Administration

The Identity of the ‘Malay Miners’ of Kinta

The Mandailing Pioneers of Kinta

Kinta Through the Eyes of Abu Bakar

Raja Ya’qub as a Young Man

The Rumah Besar and Shophouses in Papan