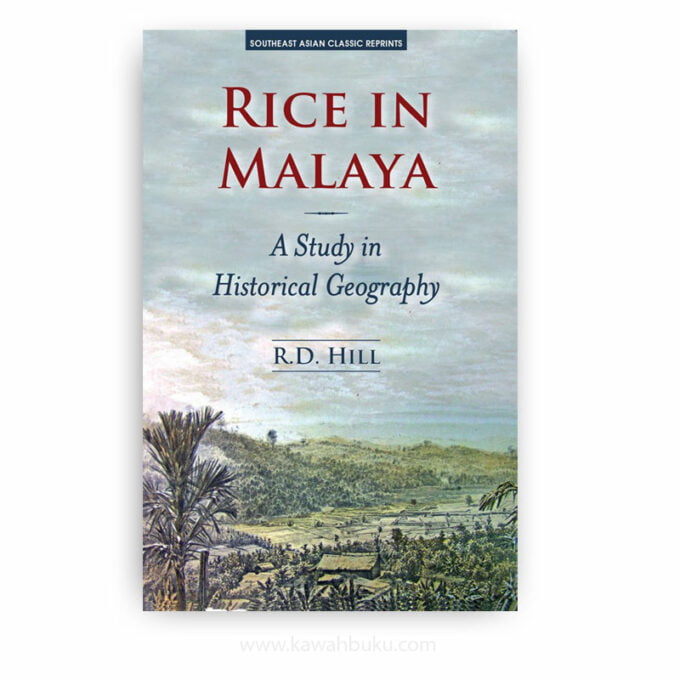 Rice in Malaya: A Study in Historical Geography

R.D. HILL is concurrently Honorary Professor in the Department of History and in the School of Biological Sciences at The University of Hong Kong.

Rice in Malaya: A Study in Historical Geography has combined historical with the regional treatment of rice growing by the Malays, concluding its coverage in about 1910, when attention in Malayan agriculture became directed towards new commercial crops. Rice is a dietary staple for virtually every Malaysian, to the extent that in each of the major languages in Malaysia, rice means food and food means rice. Drawing on a wide range of sources, Rice in Malaya opens with an examination of the often fragmentary evidence of rice-growing in prehistoric South-East Asia and then considers the great changes that followed the rise of commercial agriculture in the region before and during colonial times. A pioneering work when it first appeared in 1977, the book successfully combines the area-by-area approach of the geographer with the period-by-period approach of the historian to give a well-balanced picture of rice cultivation. The comprehensive use of evidence in several languages made the study a definitive work.

The first two of the nine chapters consider the problems involved in the prehistoric Asian location of the domesticated rice plant and the initial development of a rice-growing system, matters related to the presence of rice in mainland South-east Asia in pre-European historical times, and the appearance and development of a rice economy in the many kingdoms of the southern peninsular region. There remain questions in all three subject areas, but Hill summarizes the probable conclusions that can be suggested in the face of so incomplete an archaeological and historical record. That the domestication of the plant and the development of rice growing is not Malay in origin is clear enough; that a rice economy was not significantly developed anywhere in mainland Southeast Asia until several centuries into the Christian Era may be proper historical geography but perhaps unduly conservative. The third chapter deals with the changes in peninsular Malaya during the sixteenth through the eighteenth centuries, as European contact and the early modern Chinese immigration began, and as rice growing in its several cultivation systems began to be common among Malays.

The heart of the book, five chapters, forms an extended and well-executed exercise in traditional historical geography, combining regional and topical treatment for the nineteenth and early twentieth centuries. Several themes run through these chapters, in which Malaya is divided into units of convenience for the discussion of agrarian development rather than the standard political categories of the period. These themes are handled in relation to the variable pattern of development in the different local regions and according to the acceptable evidence available. Early land development and colonization of new lands in the coastal zones became synonymous with the expansion of rice growing; cultivation systems and the annual work cycle are outlined; a discussion follows of settlement history and changing land tenure including a comparison between the matrilineal Minangkabau and other Malays; the slow sequence of development of interior regions are outlined; the changing patterns of economy among the non-Malay aboriginal peoples is briefly discussed, and the relations of rice-growing to the demands of early tin miners are repeatedly touched upon. The breadth of this kind of treatment yields an understanding of the agrarian development of peninsular Malaya before twentieth-century world-market agriculture.

The last chapter returns to the topical style for generalized discussion of such brief themes as the appearance of irrigation-settlement schemes, the slow beginnings of commercial market-zoned agricultural production, the changes in Malay society accompanying the more recent trends in the economy, and the conclusion that in most areas the expansion of rice lands kept pace with the growth in population. An evolutionary typology of rice cultivation systems is set out. Against this are placed comparative comments regarding Boserup’s proposed progression from extensive to intensive cultivation systems. The Malay pattern does not fully support this progression, because of cultural choices peculiar to the Malays, because of historical sequences distinctive to Malaya and because of particular environmental factors.

1. RICE IN THE PREHISTORIC CULTURES OF SOUTH-EAST ASIA
Rice in Hoabinhian and Related Cultures
Rice in the Cultures of the Extensionistic Phase
Later Evidences of Rice
Rice in Prehistoric Times: Some Conclusions

3. TOWARDS A COLONIAL ECONOMY THE PENINSULA NORTH AND SOUTH TO c.1800
The Northern Region
The Southern Region
Typology, Techniques and the Social Setting

4. THE NINETEENTH AND EARLY TWENTIETH CENTURIES: THE NORTHERN MALAY STATES
The North-West: Kedah and Perlis
The North-East: Kelantan and Trengganu

5. THE NORTHERN CENTRE: PENANG AND PROVINCE WELLESLEY
The Spread of Agriculture
Province Wellesley
Province Wellesley — A Statistical Profile, 1829–33
Cultivation Techniques and Natural Hazards, the Round of Work, Yields
Production and Prices
Conclusion

6. THE NORTHERN CENTRE: PERAK
Changes Prior to Intervention
Perak in the mid-1870s
Development: Motives and Schemes
Expansion of the Established Core
The Colonized Lands
Conclusion

8. THE MARCHLANDS
The Colonized Lands
Pahang
Johore and Singapore
Rice-growing beyond Tanah Melayu