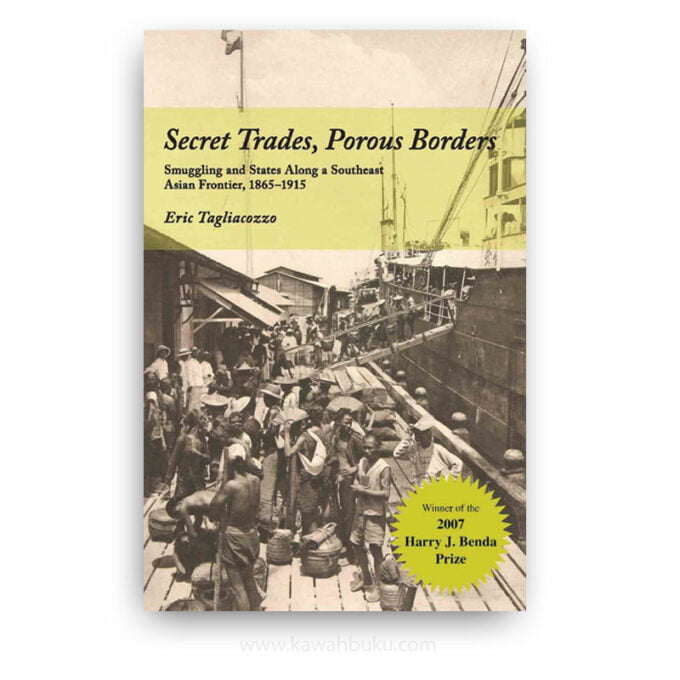 ERIC TAGLIACOZZO is an Associate Professor of History at Cornell University. He is also the editor of Southeast Asia and the Middle East: Islam, Movement and the Longue Durèe.

Secret Trades, Porous Borders: Smuggling and States Along a Southeast Asia Frontier, 1865-1915 examines the relatively novel concept of ‘illegal trafficking’ in insular Southeast Asia from 1865 to 1915 by exploring border formation by the British and Dutch colonial powers. Secret Trade, Porous Borders is a panorama of human diversity and motion. In it, the twentieth-century state templates of the Malay Archipelago take shape as a vast area of autonomous and semiautonomous states, and unbounded interior territories are transformed into two large adjoining colonial entities—one British, one Dutch. Peoples of great heterogeneity are embraced within them.

Mobilizing a stunning array of archival sources, Tagliacozzo approaches his subject from the perspective of the advancing colonial states as they attempt to transform aspirational borders into real ones. As they do so, they come into conflict with the complex traffic patterns of the archipelago’s longue durée and find they cannot contain them—hence the “secret trades and porous borders” of the title. Indeed, Tagliacozzo shows how, during a time when global patterns of exchange were quickening alongside colonial expansion, local actors adjusted nimbly to new constraints and new opportunities.

The Dutch were long rooted in Java and, here and there, elsewhere. Britain had been inching into the archipelago since 1786 when the English East India Company occupied Penang. For quite a long time, the ultimately domineering role of Europeans in the island world was not obvious. But, by the time Tagliacozzo picks up the story, the West was clearly tightening its grip and claiming its “inevitable victory”.

In his early chapters, Tagliacozzo describes in detail the multifarious push of Holland and Britain into the archipelago between 1865 and 1915. The new matrix grew in fits and starts. Yet, for all its appearance of improvisation, it was, in fact, a coordinated assault on all the unfilled spaces of the Anglo-Dutch imperial map. Dutch colonial armies and marine forces fanned out across the archipelago, moving up its rivers and bending hundreds of small states to European supervision and governance. In their wake came officials, police, and mapmakers—as well as engineers who built jetties and wharves, roads, telegraph lines, and “a necklace of watchtowers … across the frontier”.

With them came explorers, missionaries, ethnographers, and geologists. Capitalists opened mines and plantations, linking once-off-the-map territories in Sumatra and Borneo to global markets. By 1915, “western telegraphs and steamships crisscrossed the border territories”.

In Secret Trades, Porous Borders, the Anglo-Dutch frontier appears in all its bewildering diversity—from its legions of small sultanates and Chinese mining camps and independent nomads on land and sea to the burgeoning colonial centers in the British Straits Settlements and Dutch Batavia. Into this varied realm, the new colonial matrix grew apace, crimping independent actors campaign by campaign, treaty by treaty, contract by contract. But never altogether. Tagliacozzo shows how an in-depth study of smuggling demonstrates the limits of imperial control along the tightening frontier. Indonesian traders and the archipelago’s rajahs and sultans—and its ubiquitous Chinese and Arab merchants—were artful dodgers, adept at exploiting the overlapping and conflicting legal jurisdictions of the region’s Dutch-affiliated ministates and the not-always-coordinated policies of the British and Dutch.

Despite layer upon layer of new rules and legislation, and the efforts of a growing cadre of state agents on the ground and seas, Holland and Britain never wholly succeeded in circumscribing piracy, or the traffic in counterfeit money, opium, prostitutes, coolies, and firearms. Although some of these clandestine trades eventually succumbed to British and Dutch discipline by 1915—so that Tagliacozzo says, “most slave trafficking in the classic sense … was becoming obsolete”—others did not. This was spectacularly true of opium and guns. Tagliacozzo shows why this was so and, in doing so, draws a detailed, fact-rich portrait of each of these trades and of the often ineffectual state apparatuses designed to curtail them.

Tagliacozzo’ s text is lush with detail: trade goods such as beeswax, damar, and rhino horn; ships called Hydrograaf and Blue Jacket, and a German steamer named Chow Foo; and hundreds of Chinese, Indian, Dutch, English, Japanese, Malay, and Indonesian names that evoke the multiethnic land- and seascape of the region. The fine detail of Tagliacozzo’s text reflects the impressive range of his research. At one moment, he is calling upon records of the British Admiralty from the public records office in London; at another, upon the Dutch Tijdschrcift voor de Aardrijkskundige Genootschaap; and at another, the Penang Guardian and Mercantile Advertiser newspaper.

He uses court cases from the Indisch Weekblad voor het Recht and the National University of Singapore law library, Aceh War reports from the Indonesian National Archives, and countless dispatches, letters, and files from the Dutch colonial archives, not to mention thirty-four newspapers.

A Note on Orthography and Usage
Acknowledgments
List of Abbreviations

Part One Creating the Frontier: Border Formation and the State

Section II Imagining the Frontier: State Visions of Danger Along the Border
5. The Specter of Violence
6. “Foreign Asians” on the Frontier
7. The Indigenous Threat

Section IV The Illegal Weapons Trade Across the Anglo/Dutch Frontier
11. Munitions and Borders: Arms in Context
12. Praxis and Evasion: Arms in Motion

Section V A Frontier Story: The Sorrows of Golam Merican
13. Contraband and the Junk Kim Ban An
14. Worlds of Illegality, 1873-99
15. Conclusion