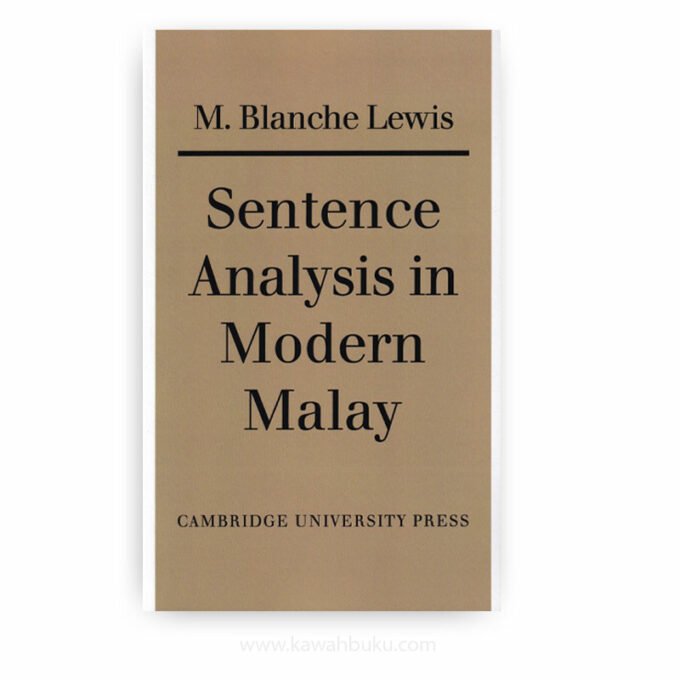 M. BLANCHE LEWIS is a researcher at the University of London.

Sentence Analysis in Modern Malay is a detailed application of the methods of linguistic analysis to the sentence structure of Malay. It is based on an extended analysis of short dramatic texts in colloquial Malay by Zainal-Abidin bin Ahmad, best know under his pen name Za’ba. The author’s analyses are, with certain modifications, kept within the grammatical framework which she deduced from a thesis presented by E. M. F. Payne in 1964. She has shown that the framework is viable when applied to actual texts, though her analysis leads to certain modifications and extensions of the original plan.

The material the author began this book as an attempt to formulate and synthesise the conclusions which the author had reached on the subject of Malay syntax as the result of teaching the language for many years. The Malay language is growing apace, to meet the demands made upon it by the complexities of modem life, and in this process of growth, the written language is adding some new designs to its stock of formal syntactic patterns. But those patterns nevertheless seem to remain substantially intact, and it is from the spoken language that they have grown. It is from the spoken language that the springs well up, through novelist, playwright and short-story writer, to keep the patterns alive and fresh and to ensure that established formality does not end in desiccation.

It was therefore to the spoken language that the author turned for her material in this preliminary study of the structure of the Malay sentence. For a period of three years, the author had the satisfaction of working closely with Za’ba during the time when he was a visiting lecturer at the School of Oriental and African Studies, University of London, and it was to a couple of little plays, familiar plots gaily refurbished, which Za’ba wrote for student performance that the author thoughts turned when she was in search of live material for analysis. With two very short narrative pieces by the same author, they are now to be found on pp. 197-240 of this book (The Texts), where the author hope their vitality will ensure their survival in spite of the indignity of numbered sentences, made necessary for reference purposes.

The author feels sure that the casts for whom they were written (now scattered about the world) will agree with her in declaring them excellent material for the light-hearted end of term performance. The occasional reference to intonation in the footnotes, always to justify a particular syntactic decision, is based on remembered cadences enjoined by the author himself during rehearsals.

Sentence Analysis in Modern Malay has been written primarily as a working textbook for second-year university students reading Malay. But it is hoped that the provision of a glossary and translations for the Texts will bring it within the reach of students—and possibly others—who, though having little or no knowledge of Malay, may yet be interested in the application of a formal grammatical framework to the sentences of a language which belongs to the Austronesian family.

2 THE UNITS OF MALAY SYNTAX

A. The Noun Phrase
(The Noun Group)

B. The Prepositional Phrase

A. The Nominal Clause

B. The Verbal Clause
I. Active
II. Passive

7 FURTHER EXAMPLES OF THE INCLUDED CLAUSE

10 SHORT ANALYSES OF CONSECUTIVE SENTENCES FROM THE TEXTS, WITH TABULATED RESULTS

APPENDICES
I. Conspectus of the Grammatical Framework
II. A note on the indication of Immediate Constituency
III. A note on Transformational Grammar

THE TEXTS
A. Hantu Bungkus (Ghost in a Shroud)
B. Musang Berjanggut (The Bearded Civet-Cat)
C. Berpantun Menchari Umpan (Singing for your Bait)
D. Menyémah (Mock Battle in the Rice-fields)

Translations of the Texts