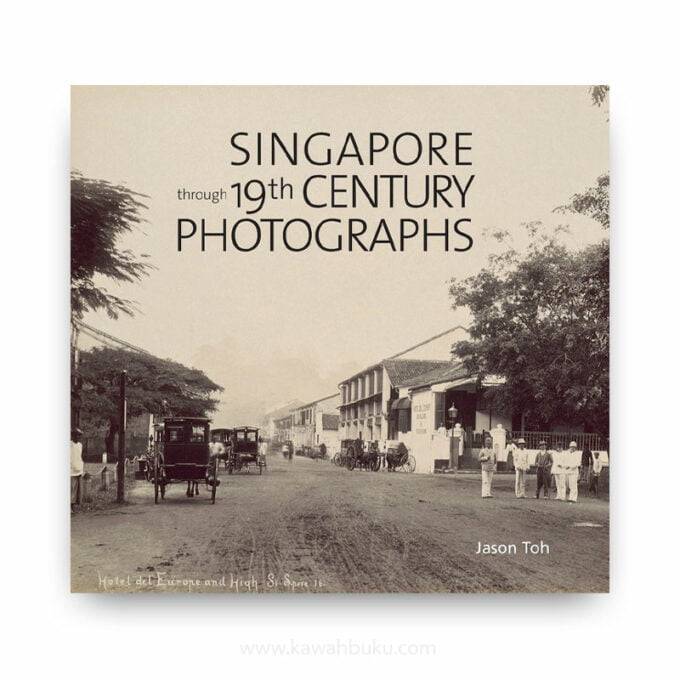 Singapore through 19th Century Photographs is a comprehensive photographic record of Singapore from the early 1840s to the 1900s. Paired with lively commentary, the more than 120 rare photographs in original albumen prints from leading institutional and private collections recreate a compelling portrait of 19th-century Singapore. In Singapore, as in the rest of the world, albumen photographs were the dominant form of photography by the mid-19th century. The selection of images provides arresting documentation of the colonial port city from the early 1860s to the early 1900s. This interlude saw dramatic physical changes to the island in response to improvements in transportation, the opening of the Suez Canal, colonial expansion in Asia (Singapore became a crown colony in 1867) and the arrival of modernity. The images can be enjoyed on two different levels: as a record of the changing landscape during a period of rapid growth and development, or as a kind of time capsule of the progress of early photography.

In his essay, Toh reminds the reader that the rise of international trade and the push for immigration led many Western photographers to seek their fortunes in the East during the latter half of the 19th century. The rise of the steamship and the opening of the Suez Canal spurred the growth in “tourism” and set the stage for the production of commercial photographs. As a transportation crossroads and a busy port city, Singapore was an attractive location. Toh discusses the well-documented photographers such as John Thomson, August Sachtler, and the prolific Gustave Richard (G.R.) Lambert, whose firm, G. R. Lambert & Co., virtually defined 19th century Singapore photography. Thomson, who went on to great fame, joined his elder brother William in Singapore in 1862 and together they operated a photographic business named Thomson Brothers.

The exact date of the founding of Sachtler & Co. remains unclear but the firm was in operation from the early 1860s until 1874. The firm of G. R. Lambert & Co. was started by the young Gustave Richard Lambert, a native of Dresden who arrived in Singapore in 1867 at the age of 21. He disappeared for a decade and then resurfaced in May 1877. The firm lasted until 1918. Lambert’s hometown of Dresden, notes Toh, was the world’s leading manufacturing centre for albumenized paper from the 1870s to 1914 as there was an abundant supply of both raw stock paper of high quality from nearby paper mills and low-cost eggs, which supplied the albumin.

Several previously unknown photographers enter the story, including Carlton Harlow Graves, A. von Roessing, and Thomas Heritage. Heritage is particularly important: the recent discovery in Holland of a set of 26 albumen print stereo views made by him between 1861 and 1862 is the oldest surviving albumen paper-based photographs identified to date. Little, however, is known about Heritage’s background except that he was from London and opened his Singapore studio at 3 Queen Street in August 1861. Toh also reveals that an American photographer, Edward A Edgerton, a young lawyer from Massachusetts, introduced the albumen printing process to Singapore in 1858, although none of his works has surfaced to date.

Toh mentions the India-based firm of Bourne & Shepherd, which is known to have sent photographers to various places in the British Empire; three different panoramic views of Singapore taken in the early 1870s can be attributed to the firm. And he sheds new light on the connection between two key Frenchmen: Gaston Dutronquoy, Singapore’s earliest advertised photographer, who also operated the London Hotel; and Jules Itier, the travelling Frenchman who holds the honour of making the oldest surviving photographic images of Singapore. Their paths crossed in July 1844 when Itier, who was part of an official delegation en route to China, lodged at Dutronquoy’s hotel during the delegation’s two-week stay on the island.

The photographs, mainly topographical and architectural landscapes of the city and its surrounding environments are neatly captioned and organized geographically into three chapters – South of the Singapore River; North of the Singapore River; and Around the Island. Whilst many of the images have been reproduced elsewhere, there are some fresh and exciting ones, such as ‘Smith Street’ by G. R. Lambert & Co., which shows the Cantonese teahouse named Yan Zhen at the corner of Trengganu and Smith Streets. The building still exists in the heart of the old Chinatown but in a much-modified form. Another rare Chinatown scene, also by G. R. Lambert & Co., shows China Street, once famous for its gambling houses. A wonderful late 1860s view of South Bridge Road by August Sachtler is placed with a pair of albumen print stereo views of the same scene, one by Thomas Heritage and the other by Carlton Harlow Graves. There is also a very rare ca.1867 panorama of Singapore Town from Pearl’s Hill by Sachtler.

The changing ‘European town’ is also well represented. There is a view of the cast-iron Telok Ayer Market under construction, of the then-new General Hospital and of Read Bridge under construction. Several bungalow scenes are featured, including two 1861 stereoviews by Thomas Heritage: Orange Grove House and an extremely rare view of ‘The Pavilion’, the British governor’s temporary residence at Oxley Hill 1869, which was in use until the completion of Government House in 1869. Those who know Singapore will undoubtedly enjoy the views of Orchard Road as a country lane lined with tall bamboo hedges and thick shrubbery.

Singapore through 19th Century Photographs ends with a useful index of 19th-century photographs, several maps of early Singapore, endnotes to the introductory essay, and a bibliography. One hopes that a similar volume might one day be devoted to the early history of portrait photography, a particularly rich subject given Singapore’s multi-racial population and the fascinating portraits of 19th-century Southeast Asian royalty by Singapore-based photographers.