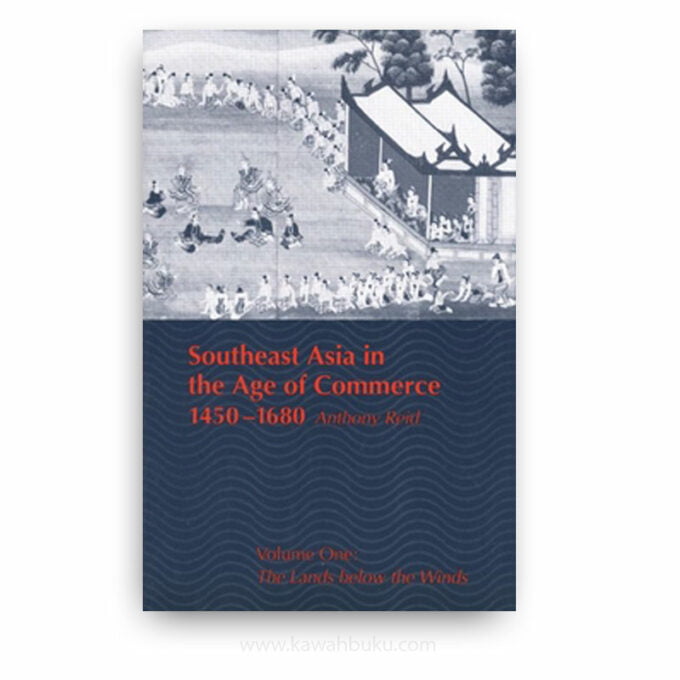 Southeast Asia in the Age of Commerce, 1450-1680: Volume 1, The Lands below the Winds explored the physical, material, cultural, and social structures of Southeast Asia during what has been termed as the Age of Commerce. Between the fifteenth and the mid-seventeenth centuries, when the Renaissance and early capitalism were transforming Europe, changes no less dramatic were occurring in Southeast Asia. This diverse tropical region was integrated into a global trade system, while trade-based cities came to dominate its affairs. Its states became more centralized and absolutist, and its people adopted scriptural faiths of personal morality. The pace of these changes finds parallels only in our own era.

This fluent and exhilarating book, answering Fernand Braudel’s call for “historians who are ambitious,” is the first of two volumes that will examine continuities and change in Southeast Asia between the middle of the fifteenth century and the end of the seventeenth. These were the years when traders and adventurers from many parts of the world fanned out through the “lands below the wind” and left behind a rich array of documents recording their activities and impressions. Reid has set out ambitiously to write a complete history of the region, drawing largely on this range of sources and to a lesser extent on indigenous ones.

He has taken the unusual step-for a Southeast Asian historian at least-of devoting an entire volume to continuities before publishing the second, which will deal with change. With half of the project in hand, the volume is easy to praise in terms of what it does, but difficult to review in terms of how well it introduces what will follow. Reid begins by setting some geographical rules. By and large, he excludes northern Vietnam, the mountainous hinterlands of the mainland, and Irian Jaya, the latter two because so few visitors wrote about them, and northern Vietnam because it was isolated from and culturally at odds with the rest of Southeast Asia.

Reid sees Southeast Asia as a coherent unit and discovers wide-ranging similarities in social organization, leisure activities, and housing, to name only three. He makes a good case for the geographical constraints that helped produce the Southeast Asian societies and their material cultures. His account of social structure is particularly insightful, moving smoothly from discussions of warfare to slavery to justice to sexual relations and the social position of women.

It is a tall order to provide the setting for two tumultuous centuries of history, and the effect is occasionally breathless. Reid takes little time to evaluate the reliability of his sources or the sojourners’ motives in writing what they did. Instead, he seems at times engrossed in a relentless search for pieces of data that can be fitted into the setting and made to support his thesis, which is that a new kind of Southeast Asian historiography, eschewing narrative and drawn methodologically from the French Annales school, is not only justified but also perhaps preferable to earlier varieties. The technique of juxtaposing data from such a wide range of sources works well throughout the book and is particularly rewarding in the pages dealing with health and medicine or contests and tournaments.

In reporting what was observed by visitors who did not stay long or speak the local language, Reid succumbs occasionally to exoticism because the sources lead him in that direction. His eagerness to find continuities, moreover, sometimes leads him to quote thirteenth- and nineteenth-century sources, which seem to fit, as evidence for the era he is discussing. More important, things that cannot be observed from outside occasionally are slighted or left out. Literary and artistic evidence are also unexplored. What Southeast Asians were saying and thinking about themselves when outsiders were not listening is not made to sound important. These shortcomings spring from Reid’s wanting to keep the book as short (and accessible) as it is, from his reluctance to speculate about sources, and from letting outsiders have the floor.

On the whole, his Braudelian approach reveals more coherence to the region between the fifteenth and eighteenth centuries than anyone recognized at the time or can be gleaned from any single modern study. His book exposes continuities of genuinely long duration, some of them extending from prehistoric times into the 1980s. Taking the region as a whole is also a refreshing development in a field where nationally oriented monographs, or subnational ones, are still the norm. The method also opens up areas slighted by earlier historians such as the history of disease and dietary habits. Anyone interested in Southeast Asian history should read, teach, and learn from this enthralling, fastidious book.

I. Introduction: The Lands below the Winds