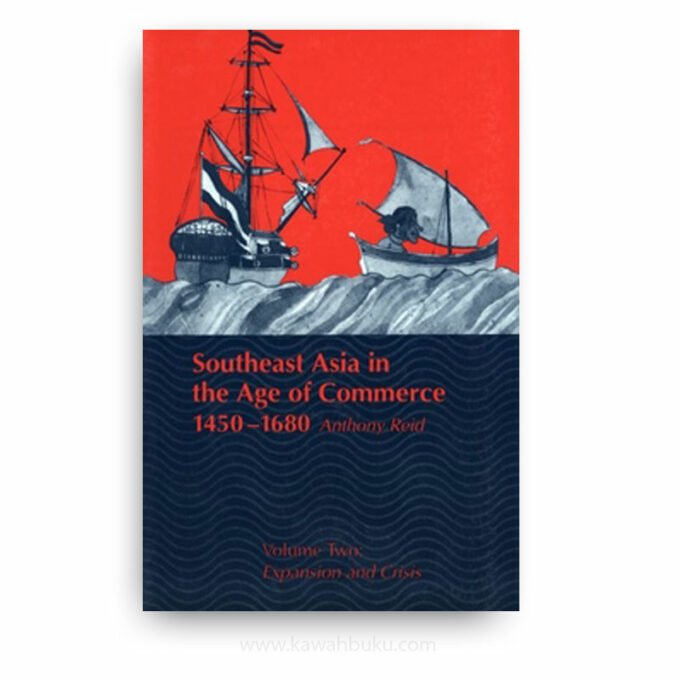 Southeast Asia in the Age of Commerce, 1450-1680: Volume 2, Expansion and Crisis focuses on the profound changes that defined the Age of Commerce as a period. The spice trade that animated the global boom of the sixteenth and early seventeenth centuries made possible revolutionary changes in urbanization, commercialization, state structure, and belief. Islam, Christianity, and Theravada Buddhism made rapid gains in alliance with the new states. Reid discerns common ground between these developments and the forces transforming Europe and Japan but identifies particular limitations on the growth of private capital and the stability of states in Southeast Asia.

This second volume of Anthony Reid’s superb Braudelian survey of Southeast Asia traces the patterns of state-building, political economy, and the history of Southeast Asia in what he calls the “age of commerce,” 1450 to 1680. During this period Southeast Asia experienced rapid changes that dramatically transformed the region and in some respects resembled those of early modern Europe. Merchant empires, heavily dependent on trade, were developing increasingly centralized and absolutist governments. New scriptural religions, emphasizing personal morality—Theraveda Buddhism, Islam, and Christianity—took root and spread through Southeast Asia, abetted by trade and frequently established by ambitious rulers.

Although the new faiths sometimes divided Southeast Asians from one another, they also forged commercial and political ties between Southeast Asians and their coreligionists both within and outside the region. Basic to these changes was the integration of Southeast Asia into the global trading network of the age of commerce.

Southeast Asia’s age of commerce did not begin when the first Western ships arrived. Its pepper, fine spices, and aromatic woods had earlier been important articles of long-distance trade, especially with China, and its geography had long exposed it to seagoing commerce. Direct trade with Europe greatly increased the demand for Southeast Asian products, but at first, Europeans fit into trading patterns that had been established before their arrival and interacted with native and other Asian traders as equals. The Dutch East India Company (VOC), headquartered at Batavia on Java, for example, was (like Aceh, Banten, Makassar, Ternate, or Portuguese Melaka) just one of the competing commercial states in the region.

Along with Southeast Asia’s integration into the world, the economy came marked urbanization, economic specialization and monetization, and rapid advance in nautical and military technology, all of which Reid describes in convincing detail. Gradually the VOC began to monopolize the trade, first of all in nutmeg, mace, and cloves during the early 1620s, and to militarily reduce its major competitors. Reid locates the turning point of the struggle in 1629, the year Aceh and Mataram suffered defeats at the hands of the Portuguese and the VOC respectively.

By 1680 the VOC had crushed all of their remaining rivals in Southeast Asia: Portuguese Melaka, Makassar, and Banten. Along with Dutch successes, Southeast Asian states gradually withdrew from the global economy. Trade and, more importantly, interest in trade declined; cities declined and the rate of technological innovation slowed; people became poorer. Reid observes that not only Southeast Asian merchant empires but also many European competitors fell to the capital-rich and militarily powerful VOC during the seventeenth century.

Reid does not imply that the VOC was the sole reason for the decline of Southeast Asia. He tries to relate the end of the era of commerce to the global, “general crisis of the seventeenth century.” He suggests that two facets of the much-discussed “general crisis” seem applicable to Southeast Asia: the general decline in global trade during the first half of the seventeenth century, caused in part by diminished supplies of gold and silver; and the global decline in mean temperature and the attendant climatic changes due to the Maunder Minimum.

For each of these Reid finds convincing evidence in Southeast Asia. He finds other reasons for Southeast Asia’s withdrawal from global trade in the seventeenth century, or at least for its apparent inability to recover from the general seventeenth-century downturn, in comparisons between Southeast Asian merchant empires and their European competitors. Despite a startling number of important similarities, Reid observes that the Southeast Asian commercial states failed to develop institutions and laws protecting private property and guaranteeing merchants a stake in the increasingly powerful states.

Reid’s two volumes provide an exhilarating overview of an important area of the globe during a crucially important time; they represent by far the best, most comprehensive study available. In addition, they provide a major contribution to our understanding of the rise of merchant empires in the early modern period. They will serve us for many years to come.

II. The City and Its Commerce

IV. Problems of the Absolutist State

Appendix: Major Ruling Dynasties of the Age of Commerce