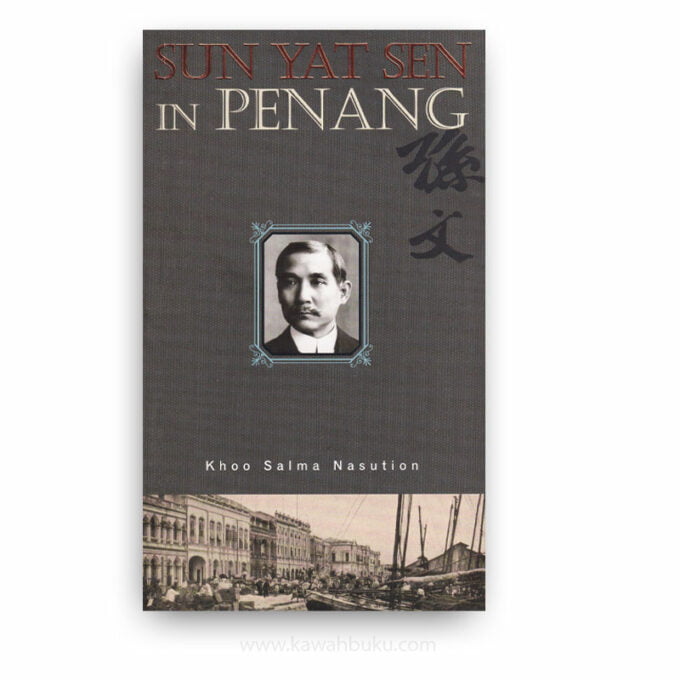 KHOO SALMA NASUTION is a fifth-generation Penang Peranakan and a writer, publisher and heritage advocate. She is currently president of Penang Heritage Trust and custodian of the Sun Yat Sen Museum, Penang, at 120 Armenian Street.

Sun Yat Sen in Penang highlights an episode in Dr. Sun Yat Sen’s career as leader of the Chinese Republican Revolution before he became the first President of the provisional government of China. From Penang, Sun Yat Sen planned the famous Second Guangzhou Uprising which took place in southern China in the spring of 1911. Through the dedication of his Penang supporters, the Nanyang Headquarters also played an important role in shoring up the Xinhai Revolution after the Wuchang Uprising on 10th October 1911. The Nanyang Headquarters operated from 120 Armenian Street. From here, the Kwong Wah Yit Poh was first published as a revolutionary newspaper. This house has been preserved to remember the role that a group of people in Penang played in the 1911 Chinese Revolution, a major event in world history.

Sun Yat Sen alias Sun Zhongshan alias Sup Wen was born in 1866 in Chuiheng Village, Xiangshan District, Guangdong Province, a short distance north of Macao. As a youth, he went to live with his brother Sun Mei in Hawai’i and attended school there. He then studied medicine in the Hong Kong College of Medicine for Chinese (the forerunner of The University of Hong Kong) and worked as a medical doctor in Guangzhou (Canton) and Macao.

Early in his revolutionary career — in 1894 — Dr. Sun formed the Xing Zhong Hui (Revive China Society) in Honolulu. The following year, he staged his first uprising in China, and when that failed, the Qing government put a price on his head. Dr. Sun then took the first boat out of Hong Kone and found himself in Kobe, Japan. There, he made a break with the past by cutting off his queue, growing a moustache and put on modern clothes. His new appearance was the first step to becoming an international revolutionary.

In 1896, while Dr. Sun was in London, he was abducted by the Chinese Legation there, but was rescued with the help of his mentor Dr. James Cantlie. Dr. Sun wrote a book about his experience, entitled Kidnapped in London, which launched his reputation as a revolutionary hero to the English-speaking world. From 1895 until 1912, Dr. Sun spent his years in exile. He became a ‘globetrotter with a cause’, sailing several times around the world to campaign for the Chinese Revolution.

The second phase of the revolution began when Dr. Sun co-founded the Zhongguo Tongmenghui or Chinese Revolutionary Alliance in Tokyo, Japan, in 1905. It was a loose alliance of several revolutionary groups. Dr. Sun’s “Three People’s Principles” (民族主義, Mínzú Zhǔyì) — Nationalism, People’s Power and People’s Livelihood — was adopted by the party. Dr. Sun established a Tongmenghui branch in Singapore in April 1906, and this was elevated to the Southeast Asian bureau or ‘Nanyang Headquarters’, in 1908.

After Dr. Sun was banned from Japan, he focused more of his efforts on the Overseas Chinese in the Nanyang, or Southeast Asia. He visited Singapore no less than eight times. From Singapore, the Tongmenghui ventured into British Malaya and the Dutch East Indies, expanding the movement until there were 20 branches and an estimated 3,000 members throughout the region.

Under Dr. Sun’s leadership, the Tongmenghui became known as the mainstream of the Chinese Revolution. Altogether ten uprisings in China (and on the Indo-Chinese border), which took place between 1895 and 1911, are associated with him. After the Xinhai Revolution of 1911, China was declared a republic, and Sun Yat Sen was elected the first Provisional President of the Republic of China. Although the movement for a Republican China had been successful, China’s troubles were far from over. Dr. Sun passed away in Beijing in 1925, amidst power struggles in a divided nation.

The Tongmenghui in Penang

Sun Yat Sen and the Nanyang Headquarters in Penang

The Legacy of Sun Yat Sen’s Supporters in Penang