Kawah Buku > Biography and Autobiography > Survivor: My Life as a Rohingya Refugee
Out of stock 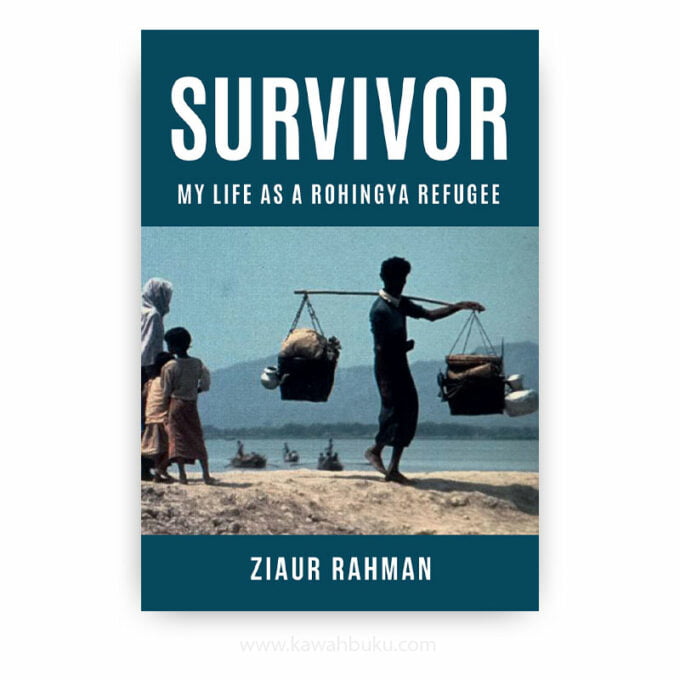 Survivor: My Life as a Rohingya Refugee

ZIAUR RAHMAN is a Rohingya survivor who grew up in a refugee camp in Bangladesh, where his family survived decades of abuse.

Survivor: My Life as a Rohingya Refugee tells by Ziaur Rahman from his own perspective, start from a moment his family fled to the refugee camps in Cox’s Bazar, where he was brought up until he was kidnapped and trafficked to Malaysia via Thailand. The story represents the hardship that many Rohingya have undergone, lacking access to basic resources such as food and medicine, as well as being exploited and abused by the camp guards in Bangladesh and wider Bangladeshi society as a whole. Yet on reaching Malaysia he tells the story of how this suffering has continued, and how with his wife and children he has struggled to build a future for himself and his family, within a system that doesn’t care for Rohingya refugees.

Ziaur Rahman’s story is also, paradoxically, a story of hope. In the camps in Bangladesh, he dedicated himself to his education and other training programmes with the vision of one day helping his community to improve. When in Malaysia he devoted himself to activism, to help Rohingya refugees access services and to protect them from abuse. In doing so he worked with the UNHCR and other NGOs in the country, even meeting the prime minister in the process and becoming the subject of a documentary film Selfie with The Prime Minister (2017). By doing so, Ziaur Rahman, whilst facing his own hardships and struggling to make a living locally, has done great service to the Rohingya community in Malaysia and around the world, raising the consciousness of the world to the suffering of refugees in host countries, as well as the ongoing atrocities against the Rohingya in Myanmar.

Today there are around 100,000 UNHCR-registered Rohingya refugees in Malaysia. Such numbers have been produced by the long history of violent marginalisation of the Rohingya people of Arakan state in Myanmar, as well as the hostile conditions they have found in the refugee camps in Bangladesh which they have fled to. Rohingya refugees have been leaving Bangladesh for countries such as Malaysia in significant numbers from the 1990s onwards. But these numbers increased considerably in the aftermath of a new wave of state violence against the Rohingya in 2012, in a conflict where state forces unleashed a wave of rioting, looting, arson, rape and violence on the Rohingya, leading to a new wave of refugees into nearby countries, particularly Bangladesh, but also to Malaysia via Thailand.

The preference of Rohingya refugees for Malaysia lies in the fact that it is a developing and Muslim-majority country, and a country that has regularly spoken up about the sufferings of the Rohingya in Myanmar. The journey to Malaysia and the reception that Rohingya refugees receive, however, is a continuation of the exclusion and violence they are subjected to in their home country. To reach Malaysia many refugees are trafficked aboard boats and then ransomed by traffickers for large amounts of money which they or their families have to pay. These traffickers have often used the border between Thailand and Malaysia as a transit point to hold refugees and move them into Malaysia, in a journey that Ziaur Rahman harrowingly describes in this book.

A journey in which refugees risk their lives and undergo horrific forms of treatment and abuse by traffickers, Others have tried to make it to Malaysia directly, undertaking a dangerous journey by sea to escape the violence of life in Myanmar, but have often had their boats pushed back by Malaysian authorities, This has again occurred in recent months during the COVID-19 crisis, as Malaysten forces have refused entry to boats carrying Rohingya refugees, and the refugees have bad to return to Bangladesh.

Those Rohingya lucky to make it to Malaysia find, however, that they are far from welcome. Malaysia is not a signatory to the 1951 UN Convention on the Status of Refugees and does not recognise refugees within its borders or provide protection to them, Thus whilst Malaysia does provide (temporary) shelter for Rohingya communities, these communities continue to be at risk of arrest, detention and extortion by state officials, as well as suffering labour exploitation in the informal labour sector, and they lack access to healthcare as well as education. This fact has become increasingly evident in the wake of the global COVID-19 crisis, with Rohingya refugees in Malaysia struggling to access food and basic services as the country’s economy closed down and with them unable to access state-based relief.

CHAPTER 2 Growing up in the camp

CHAPTER 4 Giving a chance to other refugees

CHAPTER 6 Going to a local school

CHAPTER 8 Keeping committed to my mother

CHAPTER 9 The sea and Thailand

CHAPTER 13 Selfie with the Prime Minister and other matter

CHAPTER 14 My father is still alive

CHAPTER 15 A letter to the UN

CONCLUSION What is to be done?