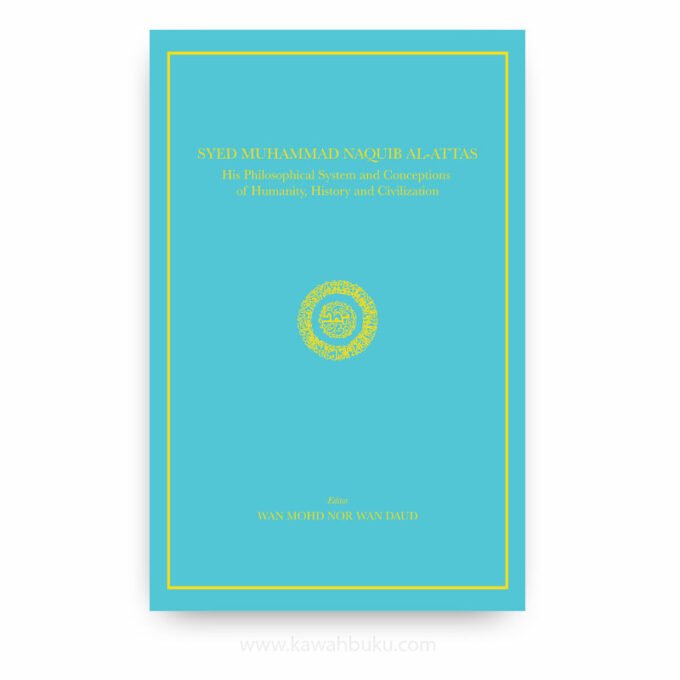 If you purchase this book you will earn 12-16 reward points!

Syed Muhammad Naquib al-Attas: His Philosophical System and Conceptions of Humanity History and Civilization comprises four articles discussing al-Attas and his philosophical thought system, his philosophical and religious reforms, his idea and practice of adab, his role as system-builder, his metaphysical worldview of Islām, and his contributions to the field of history and Malay Muslim historiography. All these articles was presented during Syed Muhammad Naquib al-Attas Symposium: Philosophical and Civilizational Dimensions organized in 2020. Starting with Wan Mohd Nor Wan Daud’s article, the author develops another one of the most important foci of al-Attas’ philosophical and religious reforms: the timeless role of Prophet Muhammad PBUH in Islamic thought and civilization. Following al-Attas, Wan Daud argues that the Golden Age of Islamic civilization in the spiritual, ethical and moral virtues, the Age of True Happiness, is the Age of the Prophet, which, he indicates with many textual and historical examples, was well understood by Muslims in different historical periods and circumstances, and geographical regions. But the encroachment of philosophical secularization and its related concept of human evolutionary development, Wan Daud points out, has caused the neglect of these virtues and the proper place of the Prophet and his Age by many modern Muslims, which he connects to two other al-Attas’ master ideas—the loss of adab and the confusion and error in knowledge.

The roots of adab in both wisdom and justice are given an expanded look in Hans Daiber’s article, The Humanism of Syed Muhammad Naquib al-Attas. In highlighting the educational projects conceived by early Christian humanists, Daiber draws out the similarities and fundamental differences in spirit between Christian humanism, the German notion of Bildung, and al-Attas’ idea and practice of adab. Al-Attas’ Concept of Education in Islām is examined, as Daiber studies al-Attas’ usage of classical Islamic sources, and likewise observes parallels and differences between his model and those developed by earlier Islamic luminaries, such as Ibn Qutaybah, Ibn Sīnā, al-Ghazālī, and especially al-Fārābī. Daiber further illustrates how al-Attas’ framework is deeply Qur’ān centric which prioritizes God’s proper place in the order of being and existence, thereby marrying the seeking of knowledge—with due recognition and acknowledgment that “all knowledge comes from God”—with the fulfillment of man’s role as khalīfah, hence making it impossible for the rise of “Arabic humanism,” and also fundamentally separating it from European humanism.

Alparslan Açıkgenç’s Syed Muhammad Naquib al-Attas’ Place in and Contribution to the History of Islamic Philosophy seeks to establish al-Attas’ place as a significant system-builder, which is a rare achievement, not only in the history of Islamic thought but in world philosophy. Drawing from the history of Islamic thought and that of the West, he argues very compellingly that al-Attas has established “a well-knit organization of ideas and doctrines in a coherent unity that has no gaps, nor any inconsistency.” With his analogy of the construction of a house and all its fundamental parts, Açıkgenç differentiates between his categorizations of ‘piecemeal’, ‘system bound’ and ‘system’ philosophers, and places al-Attas in the third category. The author demonstrates that, through the tasawwuf tradition, al-Attas further develops the psychology and epistemology established by Ibn Sīnā and al-Ghazālī, and constructs an entire system of thought reflecting the real and true nature of Reality, as experienced by the higher Sūfīs. This holistic ontology, not only fulfills the kind of discursive unity characterizing earlier philosophical systems, but is also original in its integration of true doctrines into a “coherently unified system,” which includes the nature of the human soul and the reality of Man as an entity, all notably rooted in Allāh as the Ultimate Reality. As explored by Açıkgenç, such a system bears immense importance as the foundation of science in the worldview of Islām: not only does it clarify the relationship between science as a field and Islām’s metaphysical vision, but the resultant philosophy of science would also function as the onto-epistemological foundation upon which the mindset of Muslim scientists should be trained.

A memory of a conversation with the late Fazlur Rahman opens Muhammad Zainiy Uthman’s article, Syed Muhammad Naquib al-Attas: A Creative Genius in the Age of Confusion and Error in Knowledge. His illustration of al-Attas’ enduring legacy harkens back to a lingering thought that has since stayed with him: Rahman’s recognition of al-Attas as a ‘creative genius,’ reminds him of a description Rahman made on Ibn Sīnā in his earlier work. The author expounds on al-Attas’ insightful and powerful observation made almost six decades ago of the most fundamental problem facing contemporary Muslims caused by the corruption and error in knowledge, which is the loss of adab. It involves the displacement of true knowledge and its authorities because of “the incessant assault of irrelevant, false, and erroneous factoids,” subscribed by the “ill-informed majority” and helmed by “pseudo-intellectuals and charlatans.” Begotten by the denigrating of Tradition (the Qur’ān, the Hadīth, and the Sunnah of the Prophet PBUH alongside its legitimate bearers, intellectual confusion becomes rife, the loss of meaning worsened by doubt and conjecture-masquerading as ‘criticism’—now regarded as worthier ways to arrive at knowledge. This paves the way for facts as “the final decisive measure of and what is the truth” to preponderate, caused by the inability to distinguish the proper limits of truth to every object of knowledge. When the meaning achieved lacks such limits, “the two extremes of deficiency and excess” reign supreme.

The article, Syed Muhammad Naquib al-Attas’ Concept of History: Methods, Sources, and Contemporary Challenges by Tatiana Denisova, explores al-Attas’ contributions to the field of history and Malay Muslim historiography. Beginning with a few definitions of ‘history’ from well-known authorities, the author traces the term’s relationship with civilization as a concept, pointing out Toynbee’s conception as significant in its recognition of religion as the genesis of civilization. Comparing Toynbee’s with al-Attas’ concept of Islamic civilization, Denisova ties historiography to the fundamental place of worldview within it. An indicator of civilization, historiography deems truth-telling as essential to the discipline, in light of its being the reflection of worldview. Denisova thereby suggests the close connection between religion and civilization to be intrinsic to worldview as a concept guiding the field of historiography. Examining al-Attas’ understanding of the secular worldview, the author stresses the concept’s epistemological incompatibility with history as an academic discipline. She asserts that the secular approach to be unsuitable to the fields of historiography, philosophy, and theory of history, thus questioning the idea that history is necessarily secular. History, from the secular approach, relies heavily on memory: the representation of the past hinges upon history as a bridge connecting it to the future as imagination. The acknowledgment of both the past and the future “is common for all revelation-based traditions,” a notion that has been thoroughly expunged by the secular philosophy of history. In discussing these terms, Denisova presents the case for al-Attas’ contribution: his conceptualization of man not as Homo, but as insān.

1. The Virtuous Civilization of Islām
– Wan Mohd Nor Wan Daud

2. The Humanism of Syed Muhammad Naquib al-Attas: an Evaluation of His Concept of Education in View of Classical Islamic Sources
– Hans Daiber

3. Syed Muhammad Naquib al-Attas’ Place in and Contribution to the History of Islamic Philosophy
– Alparslan Açıkgenç

4. Syed Muhammad Naguib al-Attas: a Creative Genius in the Age of Confusion and Error in Knowledge
– Muhammad Zainiy Uthman