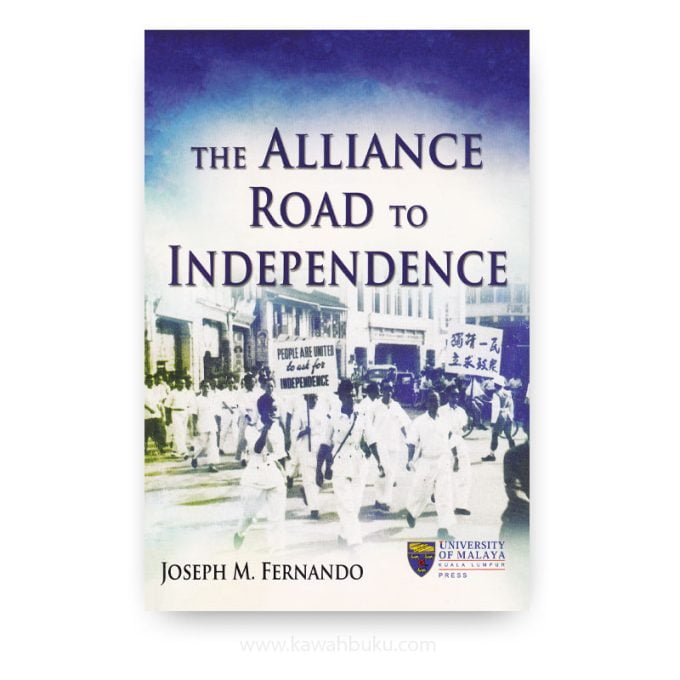 The Alliance Road to Independence

JOSEPH M. FERNANDO is an Associate Professor in the Department of History, Faculty of Arts and Social Sciences, University of Malaya, Malaysia.

When the British administration refused to meet their demands, the Alliance launched a campaign of non-violent protests and actions which led to British acceptance of their demands. This book reveals that the country’s independence was not given on a silver platter by the British as some earlier writings suggest but rather it was the result of a concerted and sustained political struggle pursued by the Alliance Party which represented all the main races in the country. Independence was indeed the fruit of the shared efforts of all the communities.

The Alliance Road to Independence is intended to fill a noticeable void in the existing literature on the history of the independence struggle in Malaysia, or more precisely, Malaya, in the post-Second World War period. There is at present no historical work that traces adequately the role of the Alliance party in the nation’s struggle for independence and this book is intended to contribute towards a deeper understanding of the party’s role during the nation’s formative period. Existing books have largely provided a general picture of the nation’s struggle for independence, relying mainly on secondary material and published sources.

These works invariably do not provide sufficient depth in discussion and analysis of the role and impact of the Alliance Party in the independence struggle. The earlier works were also hampered by a lack of historical evidence on important developments in the period relating to the independence struggle and hence the noticeable brevity in their treatment of the subject matter. In recent years the official documents related to the process of decolonisation in Malaya, particularly Colonial Office documents, and a further corpus of materials such as party documents, reports, memorandums and personal papers of politicians have become available to scholars and this new historical evidence has enabled us to examine in greater depth the country’s independence struggle.

This is particularly so in relation to the post-1951 period when a popular, mass-based nationalist movement, emerged following the introduction of local elections to push more aggressively for the grant of self-government and independence. In a broader sense, this book is also intended to contribute to the wider historical documentation of the Malaysia’s post-war political history of which there is a dearth of serious research and publications.

5. The 1955 Federal Election
Alliance’s Preparations for the 1955 Elections
The Alliance Manifesto
The Challenge from Within
The Alliance Sweeps the First National Elections

7. The Tunkws Role in Malaya’s Independence
The Contributions of Other Leaders