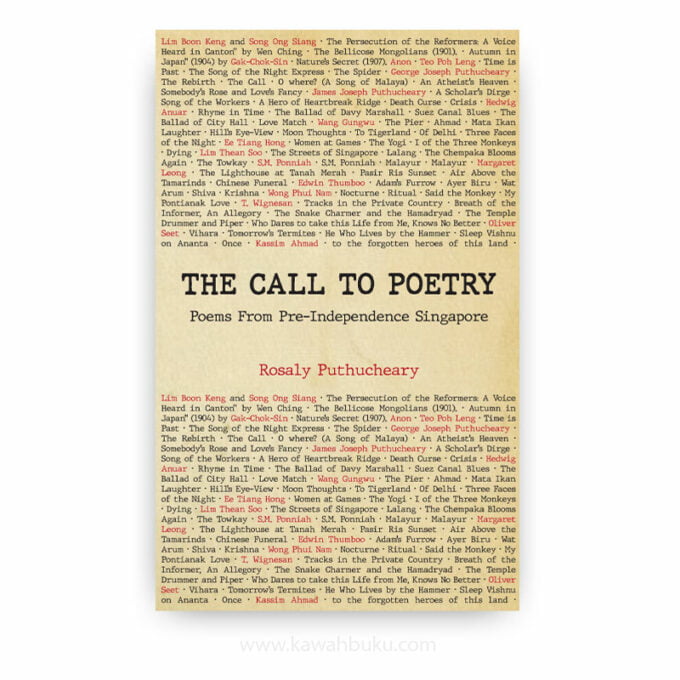 The Call to Poetry: Poems From Pre-Independence Singapore

ROSALY PUTHUCHEARY is a Singaporean with roots in Johor Bahru taught English Literature in Anglo-Chinese Junior College from 1984 to 2001. She retired from teaching in 2001. The degree of Doctor of Philosophy was conferred on her in February 2006 from the National University of Singapore.

The Call to Poetry: Poems From Pre-Independence Singapore surveys poems written in the English language from 1900 to 1962, by poets from or based in Malaya and Singapore. The poets express their emotions through images
that are telling in their vitality. Their flexibility with the English language allows them to express their felt experiences, where the language becomes a creative medium in the hands of non-native users of the language.

The aim of the poets was to break up conventional modes of perception of English literary convention, with idioms and images from this region—along with the inclusion of colloquial Malay and loan words from Chinese dialects, Indian and Arabic languages, allusions to various mythologies and heroes from the Malacca Sultanate. In an era of rising nationalism, the poets had to find words and images to state their anticolonial feelings without being explicit. Among the poets surveyed are Lim Boon Keng, Hedwig Anuar, Edwin Thumboo and Wong Phui Nam.

In writing this book, the author referred to the historical facts provided by Barbara Watson Andaya and Leonard Y. Andaya in their book, A History of Malaysia. The author also referred to the book, Forgotten Wars: The End of Britain’s Asian Empire by Christopher Bayly and Tim Harper, first published in 2008, and Yap Pheng Geck’s Scholar, Banker, Gentleman, Soldier.

“The Map that Opened Up Southeast Asia”, an article in the National Library publication, Biblioasia (Volume 11, issue 4, January-March 2016), focused the author interest on this region. Meanwhile, much of the information on poetry was from the book Writing Singapore: An Historical Anthology of Singapore Literature (2009), edited by Angelia Poon, Philip Holden and Shirley Lim Geok-lin.

The focus of The Call to Poetry is on all those poets who lived in Singapore and thought of themselves as Singaporeans, and thus traces the development of poetry in the region.

Preface
Introduction: The arrival of English and the historical background of Singapore