Kawah Buku > Law Studies > The Declaration of Independence in Historical Context: American State Papers, Petitions, Proclamations, and Letters of the Delegates to the First National Congresses 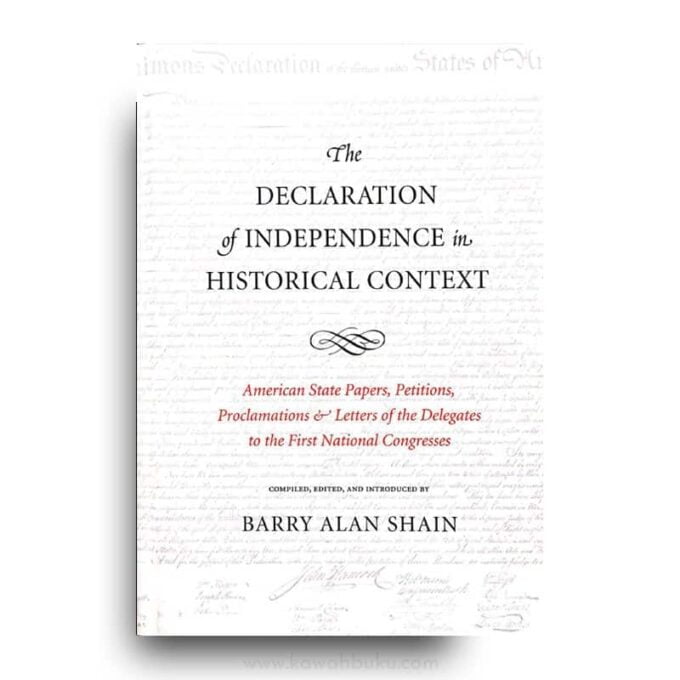 The Declaration of Independence in Historical Context: American State Papers, Petitions, Proclamations, and Letters of the Delegates to the First National Congresses

BARRY ALAN SHAIN is professor of political science and chair of the department at Colgate University.

In a possibly unusual way, the structure of The Declaration of Independence in Historical Context: American State Papers, Petitions, Proclamations, and Letters of the Delegates to the First National Congresses has been shaped by the highly contested interpretive issues surrounding the years of American Revolutionary and early national history. Political science professor Barry Shain has collected 174 letters, papers, petitions, and proclamations from the years directly preceding the creation of the Declaration of Independence that challenge many of the dominant narratives that shape contemporary understanding of this all-important document. Rather than arising from strong philosophical convictions and a clearly perceived vision of the future, the Declaration, as these writings demonstrate, was more the result of chance occurrences and practical considerations, and reflective of a society less rebellion-minded and far more monarchically inclined than most Americans today have been taught to believe.

Different interpretive schools choose from widely divergent sources, often by a difficult-to-avoid cherry-picking from a universe of documents that stretches across fifty years, in support of a particular thesis. By contrast, this collection predominantly draws on a circumscribed but rich subset of materials in an effort to reduce the problem of selection bias while offering heightened interpretive authority. Accordingly, almost all the documents in this collection were drawn from, or found ultimate expression in, one of the three continental (more accurately, intercolonial) congresses, which took place in 1765 and 1774-77, rather than primarily from potentially idiosyncratic municipal or provincial bodies such as the Boston Town Meeting or the Massachusetts General Court; second, all (or almost all) the theoretically relevant documents (that is, those concerned with political organization, collective moral ends, constitutional matters, or imperial issues) from those gatherings have been included in this collection; and third, the documents offered below retain their original language and spelling and most of their formatting, only occasionally being cut for excessive length.

Additionally, the design and goals of The Declaration of Independence in Historical Context: American State Papers, Petitions, Proclamations, and Letters of the Delegates to the First National Congresses, something of a hybrid, challenge the traditional division between historical monographs, with clearly delineated theses, and putatively non-discursive documentary collections. This approach was taken because it seemed unlikely that an additional history book with carefully selected evidence, no matter how well done, would necessarily do much either to advance our understanding of the place of the Declaration of Independence in Revolutionary-era political thought or, possibly still more critically, to help in adjudicating between the varying schools of interpretation described below in the Introduction. Put more starkly, a traditional history book on the Declaration of Independence, with carefully selected but not inclusive documentary evidence (for example, one building on an earlier essay of mine on the rights claims of the Declaration, which I intended to expand into a full-length monograph) would be unlikely to convince anyone not already sympathetic to its interpretive outlook.

Similarly, yet another collection of sundry material drawing upon documents from individual actors, municipal and provincial state papers, and periodical editorials, and lacking any special warrant or interpretive authority such as that provided by congressional “state papers,” almost all of which enjoyed intercolonial or continental standing is, no matter how carefully done, unlikely to help resolve the by now too deeply entrenched lines of debate regarding how best to understand the Declaration of Independence and, more broadly, the nature of early American political thought. This volume, therefore, makes the somewhat unorthodox choice of placing directly before the reader not carefully selected citations, no matter how abundant, nor longer snippets of documents, no matter how carefully selected, but almost all the theoretically rich documents (that is, those not concerning personal or military matters) from these three bodies in their entirety. With the addition of pointed, comprehensive introductions to the minimally edited documents, it is hoped that this collection will allow readers to place the Declaration of Independence in its pr0per imperial historical context more clearly than they might have done from reading either a traditional focused monograph or a broader-gauged documentary collection.

Every effort has been made to include in The Declaration of Independence in Historical Context: American State Papers, Petitions, Proclamations, and Letters of the Delegates to the First National Congresses as many as possible of the congressional proclamations, petitions, resolutions, and accompanying letters from the period under examination, that is, first from the beginning years of the Imperial Crisis (1764-66) and then from the years immediately before and after the colonies declared their independence and put forward their first national plan of government (1774-77).

The author hope that this will provide the reader with a higher level of confidence in the integrity of the selection process followed here than would necessarily have been the case if documents had been chosen from a more extensive assortment of newspaper editorials, pamphlets, and public documents from municipal and provincial bodies and spread over fifty years, and sometimes even longer (think, in particular, of the frequently cited “Detached Memoranda” of James Madison, written sometime between 1817 and 1832). This is not meant to demean the line work of others who have used different selection criteria from those offered here, for example, Jack Greene or Charles Hyneman and Donald Lutz, but only to draw attention to the overlooked merits of using a more delimited set of materials, in particular that doing so greatly reduces editorial discretion in choosing documents. The benefits of such a procedure and the hoped-for resulting increase in interpretive authority. The author believe, may be available only when almost all relevant materials are included and, at best, lightly edited—as has been done here.

This procedure meant excluding provincial colonial materials produced during the middle years of the Imperial Crisis, 1767-70, since they lacked a continental congress for their expression and thus fell outside the principal selection rule used for The Declaration of Independence in Historical Context: American State Papers, Petitions, Proclamations, and Letters of the Delegates to the First National Congresses. Although these documents would surely have enhanced the comprehensive historical character of the book. they would have added little theoretical novelty, and they would have fallen outside the “naturally” circumscribed universe of materials to be considered in this work.

Most of the documents are complete, so readers will be able to come to their own conclusions regarding the dominant political visions advanced in them and in early America, the relationship between the documents and the Declaration of Independence, and thus the degree to which the Declaration should be viewed as broadly representative of American political thought of the period. Yet an explanation is still needed why—no matter how inclusive the selection process—some documents were included but not others.

There were three criteria used in selecting documents and letters. Well-known documents or those generally understood to form a significant part of the historical record were included. Second, long documents with limited or no political theoretical interest (for example, draft military or economic treaties) were not included. And third, those materials not broadly recognized as an essential part of the historical record were included only if they met a relatively modest standard of theoretical richness or, more likely, helped make sense of the principal congressional state papers included in the collection. Since there are around 5,000 printed pages alone of letters from congressional delegates for the period of the First Congress and the early years of the Second (1774 until the end of 1777), little else could be done if the volume were to be kept to a manageable length.

Doubts might remain that a different but equally inclusive collection of documents would have told a different story in support of one or another of the alternative schools of interpretation discussed below in the Introduction. As with any scholarly work, readers will, in the end, have to judge for themselves whether the selection of documents seems unbiased. All the author can promise here is that every congressional document and delegate letter that he read and that met the criteria for inclusion—that is, it had historical relevance for the period or continuing theoretical interest, no matter whose line of interpretation it might be viewed as supporting—was chosen for this volume.

If readers are convinced of the same, as the author hope they will be, they should be prepared to begin exploring the dominant political ideas of these bodies’ delegates and the comparative standing of the Declaration of Independence within the political aspirations and goals of the American colonists during the years leading to America’s declaring its independence, 1764-76, and the especially revealing year that followed its issuance. Thus prepared, readers should be able to assess the strengths and weaknesses of contending theories of interpretation of the founding movement to which the Declaration of Independence gave voice, and of its place in early American political thought.

Finally, the author offer a few comments on the documents themselves. The author avoided introducing potentially intrusive notes into the text that might, even if ever so subtly, influence a reader’s understanding of the documents. Such commentary is limited to his introductions or, at most, to an explanatory comment in a headnote. In addition, although not facsimiles or drawn directly from archival materials, almost all the documents retain their original eighteenth-century spelling and punctuation, in all its variety (often an indicator of an author’s socioeconomic status), along with the original formatting and underlining or italicization (both printed as italics). If most of a document was underlined, however, that formatting was silently removed.

Very occasionally, when source materials regarding an original document differ, silent corrections were made to any apparent typographical errors in a reprinted edition. Ellipsis points in the documents indicate where material was omitted by an editor, whereas suspension points present in the source texts themselves are enclosed in square brackets […]. Parallel lines in materials taken from the Journals of the Continental Congress were added by the editor, W. C. Ford, to indicate that the text enclosed within the lines was taken from the “Corrected Journal” (which began on September 5, 1775), not the original manuscript Journal. Finally, in those letters taken from Paul H. Smith’s superbly edited Letters of Delegates to Congress, the author have retained a number of his editing conventions: conjectural readings for missing text are bracketed in roman font [roman], editorial insertions are bracketed in italics [italics], and matter that was crossed out in the manuscript but later restored by the author is in parenthe‘ sea and italics (italics).