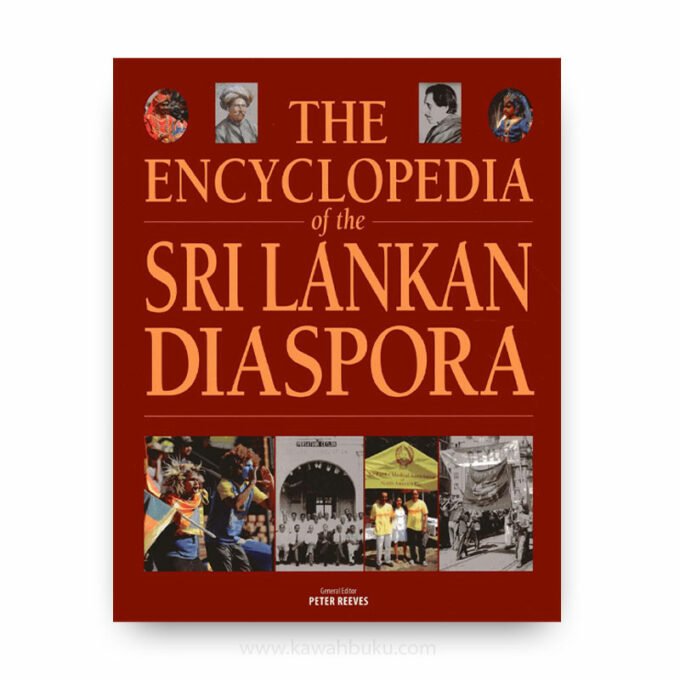 The Encyclopedia of the Sri Lankan Diaspora

The editorial committee led by PETER REEVES, with the assistance from RAJESH RAI and HEMA KIRUPPALINI

The encyclopedia has been divided into several sections. Part I—Context—surveys the Sri Lankan setting, providing a sense of the land, the nature of connections and relations with the outside world; and the historical experience of the island. The classical period reveals the myriad early migration streams to the island, the emergence of agrarian society, the development of polities, and the evolving patterns of social norms and religious practices in Sri Lanka prior to the advent of European rule. The colonial period (circa 16th century to 1948) accounts for developments during the Portuguese, Dutch and British rule over the island—in terms of key administrative, social and economic changes, the opening up of new educational opportunities, and the evolving political frame till independence. The post-colonial phase examines the development of nationalism in the independent state, the nature of successive governments, key constitutional changes, the factors leading to the outbreak of ethnic conflict and the ramifications of the civil war on the Sri Lankan polity, society and diaspora.

Part II of the encyclopedia deals thematically with the cultural, social and economic life of the diaspora: the ways in which Sri Lanka’s food traditions have been transplanted in the diaspora and changes that have come about in culinary practices; the wide range of sports, which both link different areas of the diaspora and reconnect people in the diaspora with Sri Lanka; how transnational marriage patterns have evolved and played a role in peopling the diaspora; and of religious life, in terms of institutions and practices but as well of the evolution of Sri Lankan Buddhist relations with neighbouring states. This section also features key icons of popular culture—in music, cinema, dance and theatre—and successful entrepreneurs, and analyses the impact of temporary migrant labour remittances on the Sri Lankan economy.

Part III, the final section of the encyclopedia’s contextual segment, studies the evolution and character of the creative literature of the diaspora, and examines how this distinguished corpus of literary works have addressed key aspects of the diasporic experience.

The largest section of the volume, Part IV—’Communities’—provides country or in some cases regional profiles of the Sri Lankan diaspora. Widely dispersed across the globe, significant Sri Lankan diasporic communities have emerged in Asia, North America, Europe and Australasia. Various trajectories of migration account for the formation of these communities. In the second half of the 19th and the early 20th centuries, the search for better economic opportunities saw many educated personnel and traders migrating to colonial outposts in Southeast Asia. In the latter half of the 20th century, as Western countries gradually opened their borders to non-White immigrants, Sri Lankans ventured to new destinations, in North America, Europe and Australasia. The large scale movement of refugees following the outbreak of the civil war in Sri Lanka further augmented the size of the diaspora in these locations. In recent times, a significant number of Sri Lankans have also come to be employed in the Gulf States, albeit on contractual terms that ensure only a temporary residence.

The ‘Communities’ section thus accounts for the specific Sri Lankan experience in specific locations, providing a synoptic view of their historical origins, migration process and evolution, demographic change, their social, economic and political experience, and their contemporary concerns and challenges. Important episodes and events which capture the essence of the community’s experience have been highlighted. There are some common threads across certain clusters—in Malaysia and Singapore, for example, where the history of Sri Lankan emigration spans well over a century, and was closely connected to the spread of colonial power in the region. Sri Lankan diasporic communities in the West also share certain commonalities, in terms of their encounters with the culture of their countries of residence, and as well a manifest concern with political developments in Sri Lanka. It is the individual distinctiveness of the various diasporic communities, however, that stands out and underlines the enormous complexity and variation in experience.

The encyclopedia is illustrated with a wide-ranging selection of photographs, both historical and contemporary, and examples of documents, dust jackets and other illustrative materials. Statistical data are presented throughout in figures and tables. In addition, there is a full set of maps—both to locate communities in terms of region and territory and to illustrate historical aspects of the growth and development of the community or the contextual factors to do with migration, settlement and socio-economic activities. For the maps, the intention has been to mark and name places mentioned in the accompanying text, together with additional features, to assist in terms of context and reference.

The bibliography is intended purely as a source for further reading on the subjects of each of the main sections of the ‘Context’ and ‘Communities’ sections of the volume. This means that rather than being presented as a single, consolidated list of bibliographical material (books, book chapters, articles and, where appropriate, websites), the bibliography is divided into relevant sections following the structure of the encyclopedia. Therefore, some titles may appear more than once.

PART I THE SRI LANKAN CONTEXT

PART II LIFE AND PEOPLE IN THE DIASPORA