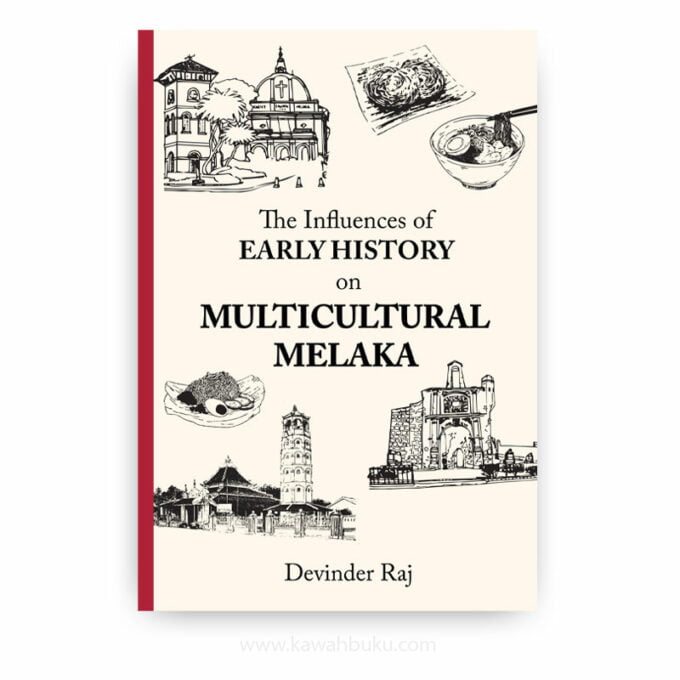 The Influences of Early History on Multicultural Melaka

DEVINDER RAJ has worked as teacher, an English Language officer at the Ministry of Education, at the British Council in Kuala Lumpur, the Beijing INTI Management College and also volunteered at the National University of Laos.

The Influences of Early History on Multicultural Melaka is not a typical guide to Melaka. It weaves together history, cultures, architecture and cuisine to tell a more multifaceted story of Melaka, once a great trading port fought over by various colonial powers, resulting in a rich heritage that is still salient today, resulting in a multicultural city reflecting its cosmopolitan journey over the centuries. Journey along the old streets of Melaka and past its ruins, where its rich history, reflecting hundreds of years of Asian and European influence, remains alive and evolving to this day.

This book has two sections: the first is on the early history of Melaka and how it influenced the multicultural nature of the country (and especially the state of Melaka today) and the second is on how traditional festivals, cuisines, architecture and the various ethnicities have had an impact on the people as a whole. Melaka, being on the crossroads between India and China, has been an important trading port where people from various countries brought in their languages and culture, thus enriching the Malay language.

Asmah Haji Omar stated that when the Srivijaya Empire ruled the Malay kingdoms from the 7th to the 14th century CE, the Sanskrit language contributed to the Malay language. She stated that “the first-ever form of the Malay language was in the Pallava script”, and four old inscriptions discovered in Sumatra and Bangka Island were written in Old Malay. The Sanskrit words in the inscriptions detailed the journeys of the Kings. The Pallava script was later used in Sumatra and Java, and eventually, Malay was written in a modified Arabic script known as Jawi. Hikayat (stories or narratives), Hindu epics and Buddhist Jataka tales were introduced to Peninsular Malaya.

The Malay language, over the years, has benefited by absorbing words from Sanskrit, Arabic, Portuguese, Dutch, Chinese, Tamil and English. The earliest Chinese settlers came from the Hokkien speaking provinces of south China and it was the vernacular of the Amoy district that proliferated. According to A.W. Hamilton in his article, “Chinese Loan-Words in Malay”, he states that there are less than 200 such words, and most of them refer to articles of food, household utensils or games of chance.

The Tamils came to the country in two waves; first, the Chetties came to trade during the rule of the Malay Sultans in the 15th century, and the second was when the British recruited them to work in the rubber plantations and as general labourers in the early 19th century. The Malay language has borrowed many English words from the scientific and technical fields. In the 70s, the medium of instruction for schools was switched to Malay, but before this, many English words and expressions had already been absorbed into the Malay language and were now becoming more widely institutionalised.

The mingling of ethnicities in the early years and the borrowing of words led Melaka to become multicultural, but these days there seems to be less mingling, and Malaysia has become more of a plural society rather than a multiethnic society.