Kawah Buku > History > Malaysia > The May 13 Tragedy: A Report
Out of stock 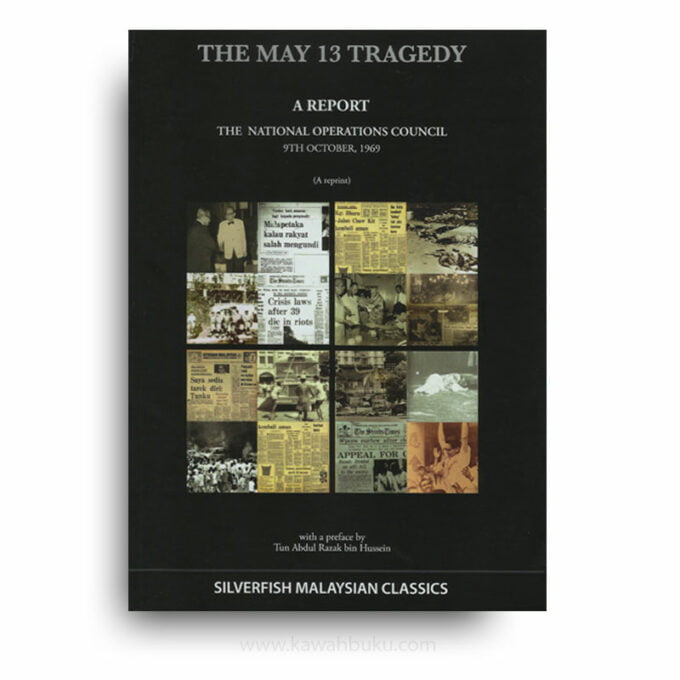 The May 13 Tragedy: A Report

The National Operations Council (NOC) or Majlis Gerakan Negara (MAGERAN) was an emergency administrative body which attempted to restore law and order in Malaysia after the 13 May Incident in 1969, in the wake of the racial rioting which broke out in the federal capital of Kuala Lumpur.

The May 13 Tragedy: A Report by the National Operations Council or MAGERAN published on 9th October 1969 has been prepared with the full realization that important matters must no longer be swept under the carpet and that the facts of May 13 should be made known to the public. Furthermore, it has been written with the conviction that the objective of national unity must be confronted squarely, and the alternatives before us decided upon sincerely and courageously. The course of our Nation so charted must be pursued with the united efforts of all loyal Malaysians resolutely, with courage and confidence.

It is intended after the publication of this Report to invite representatives of various groups in the country— political, religious, economic and others—to serve on a Consultative Council, where issues affecting our national unity will be discussed fully and frankly. In this way, it is hoped to reach an understanding and agreement on these national issues that would ensure the future peace, security and unity of our country and that the May 13 tragedy would not recur.

May 13, 1969, will go down in our history as a day of national tragedy. On that day the very foundation of this Nation was shaken by racial disturbances whose violence far surpassed any we had known. It was only the firm and prompt action of the Government, together with the loyal support of the Armed Forces and the Police, which quickly brought the situation under control. Had it not been for the immediate preventive measures, there is no doubt that the whole country would have been plunged into a holocaust.

For some of us, the tragedy has a direct and personal meaning. But the significance of that day does not, and should not be allowed to, escape anyone of us. On that day we have jolted into a sharp realisation that the racial problem in this country is a serious one and measures taken in the past to cope with it have not proved adequate.

The May 13 Tragedy: A Report lays out the facts on the disturbances which broke out on May 13. It outlines the historical background of the mood of the people on that day; it relates the day of tragedy and the role played by the Armed Forces and the Police in quelling the disturbances and returning the country under the firm control of the Government; and, finally, it points to the direction that the Nation should take.