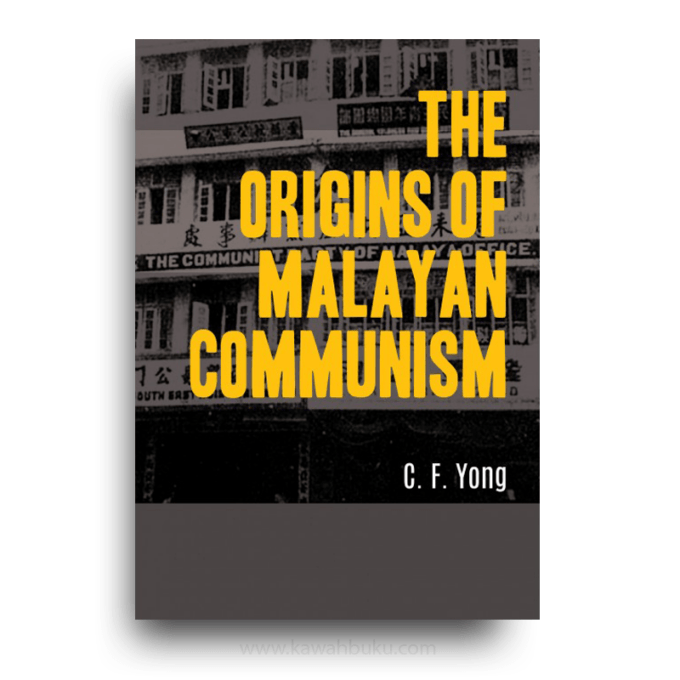 The Origins of Malayan Communism

The Origins of Malayan Communism draws on substantial Chinese and English-language archival sources and oral history evidence from participants in the movement to reconstruct the chequered history of the Malayan communist movement of pre-war years. The present work explores the origins of Malayan communist, analyses the changing ideology and organisations of the Malayan communist movement, unmasks its dramatis personae and assesses the success or otherwise of British colonial control of the MCP and its various affiliates.

The MCP struggled grimly for survival during its early years but posed a real threat to British colonial rule from 1936 after it had secured an important power base in trade unions. It also capitalised on rising Chinese nationalism in July 1937 in the aftermath of the Sino-Japanese War, arousing Chinese community sympathies in general and mobilizing Chinese-educated youths, women and intellectuals in particular.

By reconstructing the origins and development of Malayan communism of the prewar era, the findings of the present work do challenge that of the pioneer scholars in a number of areas. For example, it confirms that anarcho-communists were the first to propagate the theory and practices of communism in 1919 and not the KMT Left, the Chinese communists, or the PKI elements as has been suggested. The present work establishes the date and place for the founding of the MCP as mid-April 1930 in Buloh Kesap, Johore, and not in late April 1930 or in 1932 in Singapore.

Finally, The Origins of Malayan Communism shows that the observations of such scholars as Victor Purcell were mistaken when he wrote in 1954 that “Before World War II, the Malayan Communist Party (MCP) was not a major force in local politics… the Party did not constitute a real threat to the administration.”

The work establishes that in the eyes of the governors, Malayan Communism had always been their “Public Enemy No. 1” as it was for the SS Special Branch until late November 1939 when the colonial government finally confirmed that “The present trend of the work of the Special Branch is turning from Communism pure and simple to the influence of Japan and of Japanese policy upon the Chinese national movement, with their inevitable repercussions on the life of the Chinese in Malaya.”

The threat of communism, “pure and simple”, was real when the MCP unleashed their twin campaigns from 1936 to mobilize Chinese intellectuals, youths and students for national salvation against Japan and to foment labour unrest to improve working conditions and undermine the colonial rule.