Kawah Buku > History > Malaysia > The Other Malaysia: Writings on Malaysia’s Subaltern History
Out of stock 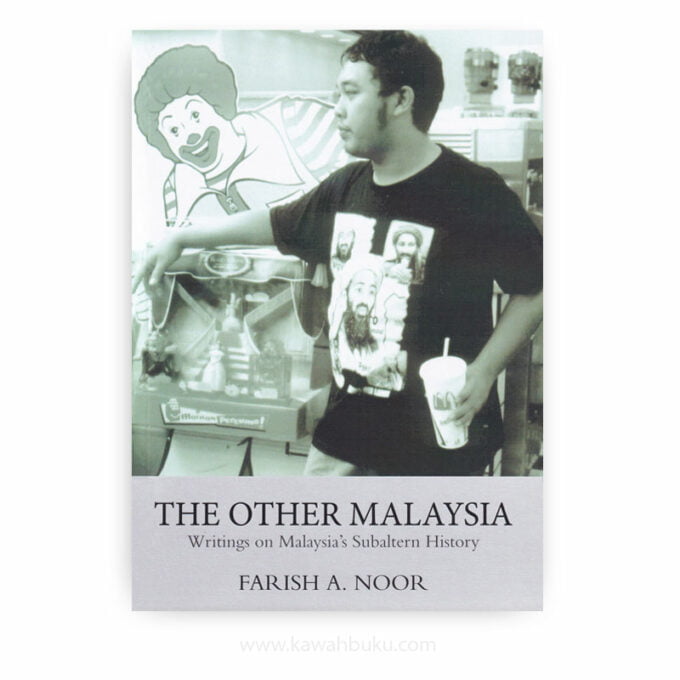 The Other Malaysia: Writings on Malaysia’s Subaltern History

The Other Malaysia: Writings on Malaysia’s Subaltern History is a compilation of some of the articles by Farish A. Noor that were published in the online daily Malaysiakini. His writings aimed to unearth the forgotten and marginalised aspects of Malaysian history, reminding us of the manifold possibilities and contingencies that existed in the past and remain with us still. The articles were an attempt at a sustained critique of Malaysian historiography and an effort to deconstruct some of the more settled and essentialist understandings upon which Malaysian politics, culture and social life are premised.

The articles in this book were written between 1999 to 2002 for the news website Malaysiakini.com. In the wake of the economic and political crises of 1997-98, Malaysian society was on the lookout for alternative sources of information and news. That Malaysiakini.com appeared on the scene not long after was not a surprise: at the time there were about thirty or so alternative and opposition websites operating in cyberspace, scoring tens of thousands of hits on a daily basis.

Being an academic and activist meant that the author was offered a wide variety of outlets for his writings. At the time, the author’s articles were appearing in the New Straits Times, Harakah, Saksi.com, FreeMalaysia.com and Malaysiakini.com. It seemed as if a state of radical dislocation had set in, and the moment was right for alternative writings to come to the surface at long last. Though the articles tended to focus on politics and the political, the pieces for Malaysiakini.com were more focused towards the reactivation of the memory of the past and to bring to light aspects of Malaysia’s marginalized and subaltern histories and narratives that had been buried for so long. The author wanted to remind us of the manifold possibilities that remain with us still, and the alternative paths the country could have taken (and still can, if it decides to do so).

The Other Malaysia was an attempt to write a deconstructive form of political history, showing that history and historiography themselves were political in nature and that the awkward silences and blind spots in the national historical narrative were not there by accident. If and when such erasures occur, they do for a reason and with ideological motives behind them. It was this sustained attempt at recovering the forgotten episodes of our collective past and present that drove the author to write the article that appeared in his column.

Throughout his adult life, the author has been struck by the lopsided and myopic perspective that is clearly evident in the collective imaginary of the Malaysian nation. The contribution of ‘Other’ ethnic and racial groups, the role of women in the country’s historical development and the pre-Islamic past of the county have been conveniently sidelined and relegated to the footnotes of history. Instead, we have been given a static and nomological account of a nation whose development has followed a linear path unobstructed by historical contingencies or alterity. The net result is the creation of a monolithic historical discourse with a two dimensional historical subject at the centre. Yet who and what is this agent of history?

A close reading of Malaysian official historiography will show that the Malaysian historical subject remains male, Malay/Bumiputera, middle-class and Muslim. But surely this is just one aspect of Malaysian identity that is far more complex and cries out to be problematised and interrogated further. If any of the articles focused on the role played by these Malay-Male-Muslim leaders and thinkers, it was precisely because the author wanted to show that there was no such thing as a simple and rigidly defined Malay-Male-Muslim subject. The Other Malaysia tried to do just that, by foregrounding elements of the past that would complicate such attempts to construct a flat and static historical narrative premised upon such simple essentialist notions of identity and difference.

INTRODUCTION
Looking for Another Malaysian Story

PART ONE — Politics and the Political

26. Thomas de Quincey and the Malay from Nowhere
27. How the Penghulu Shaitan Brought Islam to the Malay World: The Miraculous Coming of Islam to the Malay World According to the Hikayat Merong Mahawangsa
28. Sugar Baby Love
29. Pharisees at My Door
30. Ya Rahman! Ya Raheem!
31. Sex and the Asian Woman
32. Porn and the Sheikh
33. Remembering Faridah Hanum
34. The Other Face of Buddhism: Aung San Suu Kyi and the Buddhist Struggle of Liberation
35. Venus at the Gates: ASEAN Art in Search of a Home
36. Another Blow to Malaysian History
37. Of (Misguided) Pride and Prejudice
38. Whippin’ Time Again
39. Why Hudud? (Why Not?)
40. There Was Once a Religion Called Science a Fable for Our Troubled Time
41. In Defence of Difference: Why Freedom of Speech Matters Most
42. (Nusantara) Women on Top
43. Domestic Policy by Other Means: Malaysia’s Foreign Policy Towards the Muslim World Reconsidered

PART THREE — Looking for the Other Malaysia

44. Malaysia Has Lost a Favoured Son: In Memory of Nik Rashidin Nik Hussein