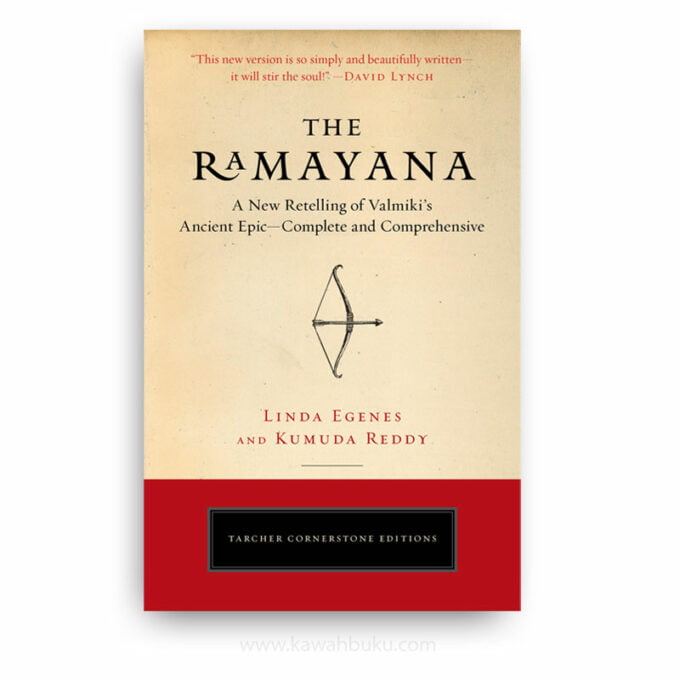 The Ramayana: A New Retelling of Valmiki’s Ancient Epic—Complete and Comprehensive

LINDA EGENES is an adjunct professor of writing at Maharishi University of Management in Fairfield, Iowa.

KUMUDA REDDY was a former faculty member and anesthesiologist at Albany Medical College.

The Ramayana: A New Retelling of Valmiki’s Ancient Epic is a delightful straightforward and lyrical retelling of the ancient Indian epic of loyalty, betrayal, redemption, and insight into the true nature of life—one of history’s most sacred ethical works, rendered with completeness and sterling accuracy for the modern reader. Here is one of the world’s most hallowed works of sacred literature, the grand, sweeping epic of the divine bowman and warrior Rama and his struggles with evil, power, duplicity, and avarice. The Ramayana is one of the foundations of world literature and one of humanity’s most ancient and treasured ethical and spiritual works. Includes an introduction by scholar Michael Sternfeld.

Egenes and Kumuda have produced an in-depth new translation of the ancient Hindu epic poem about Ram, the favorite son of a powerful king and an avatar of Vishnu, and his search for his wife, Sita, who is abducted by a demon king. The myth is well-known and influential throughout South and Southeast Asia but deserves more attention in the West. As such, this new edition by two experts in meditation and Ayurvedic health is commendable for its effort; it is a strong abridgment, striking an effective balance between retaining the poem’s structure and multiple sub-plots and reducing the poem’s intimidating original length.

However, it strives for faithfulness to the original Sanskrit structure and poetry, with quoted lines at the beginning and end of each chapter, and the result is stiff and self-consciously old-fashioned prose, with characters addressing Rama as “O greatest of men” or telling Sita “do not grieve so, my lady,” which makes the characters feel flat at times rather than like complex, living humans. This book will be of interest to readers looking for an abridged edition of the original text, but will disappoint those seeking to absorb the poetry of the original.

The Ramayana is a story that is beyond time. Every individual, family, and society experiences problems with relationships, children, work, and so forth that are not so different from one era to the other. The source of all these problems also never changes with the times—it is creating imbalances in the body, mind, emotions, behavior, and environment by violating natural law.

In The Ramayana, one can find the most highly evolved personalities such as Rama, Sita, Hanuman, and many others who are rooted in truth and Dharma, natural law, in their thoughts, speech, and actions under all circumstances. To encounter such people is to come face to face with life. It is like standing in front of a mirror and seeing for the first time who you really are and what is your life in the context of values, lasting peace, and happiness. The Ramayana will stir your soul and gently and effortlessly bring about these needed changes and values. It will teach in the subtlest way how to foster and enjoy good relationships with friends, parents, spouses and children, your associates and workers, and all of the nature around you.

Prologue: The Qualities of Rāma