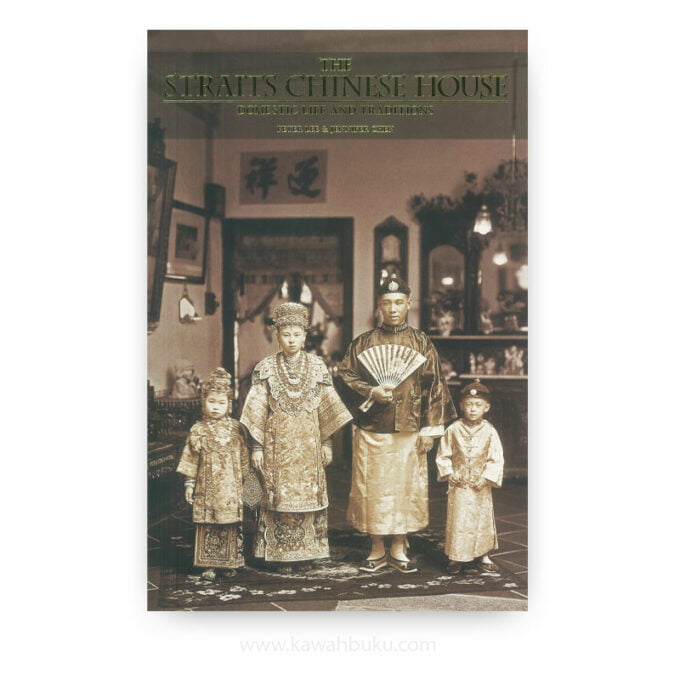 PETER LEE is the Curator of the Peranakan Museum in Singapore.

JENNIFER CHEN (we wish we could get more information regarding this author).

The Straits Chinese House: Domestic Life and Traditions features historical photographs from established Straits Chinese families, rare images of interiors and a fine collection of furniture, jewellery, costumes, and household wares. It also offers readers a fascinating view into the colourful, multifaceted domestic lifestyle of the Straits Chinese; from the ceremonial and religious to the day-to-day and recreational; from their reception hall, ancestral hall, bridal chamber, to their living and dining rooms and kitchens.

The Straits Chinese or Peranakan community is perhaps one of the oldest overseas Chinese communities in history, having established itself in the Malay Archipelago as early as the seventeenth century. By the end of the nineteenth century, this community had gained prominence, not only for the wealth, education, and lavish lifestyles of its most successful members, but also for its active participation in civic life and government. The Straits Chinese are distinguished by their rich culture at once distinctive and eclectic, rooted in Chinese tradition, yet indelibly influenced by Malay, Portuguese, Dutch and British cultures. Their house can be said to symbolise this vibrancy of culture and heritage. It is the setting in which Straits Chinese art, ritual and tradition are most clearly expressed.

There is insufficient evidence to determine how Peranakans lived prior to the nineteenth century. The earliest known residences were terraced houses along the old Heeren Street in Malacca, which had narrow frontages but were usually very deep, and included courtyards or air-wells. It is still not certain whether the Babas built such houses or simply moved into existing residences. What can be ascertained is that the lands on which the houses sat were acquired from Dutch or Portuguese owners. The arrangement of the houses were formal, and followed strictly the conventions of Chinese interiors adapted to the limitations of Malacca terraced houses. The houses had a series of halls starting with the reception hall, and followed by a formal sitting room, a courtyard, an ancestral hall, a dining hall and the kitchen. The living quarters were all situated on the upper level, the most important bedroom being the one facing the street.

Wealthy Babas of Malacca moved to Heeren Street, now known as Jalan Tun Tan Cheng Lock, from the late eighteenth century. The community soon spread further north to Tranquerah and to Jonker Street. In the early twentieth century, seaside homes were built in Klebang and Tanjong, further north from the town. Less wealthy Babas lived in the outskirts of these zones or in suburbs such as Bukit Rambai. In Penang, the Peranakans settled in shophouses along the streets of central Georgetown during the first decades of the nineteenth century. Prosperous residents-built mansions on Light Street. Towards the end of the century, many Straits Chinese tycoons built fabulous seaside villas in the old colonial enclave of Northam Road (Jalan Sultan Ahmad Shah), which became known as ‘Millionaires’ Row’.

In early nineteenth-century Singapore, the Peranakans first settled in shophouses and terraced houses in the vicinity of Telok Ayer Street and Amoy Street. These residences were usually not as deep as their Malaccan counterparts, and naturally, the use of space had to be modified. Several families moved into the terraced houses on River Valley Road, Mohamad Sultan Road and Emerald Hill Road in the late 1890s. From the turn of the century, wealthy Peranakans began to build colonial-style mansions and villas in Katong and Pasir Panjan, middle-class Babas found new homes in the Siglap, Katong and Joo Chiat areas, where many Babas still reside.

Peranakan families to varying degrees attempted to maintain the traditional arrangements of their homes, no doubt with concessions to modern life. Colonial-style living rooms, which were largely absent in the old houses, naturally became a modem and added feature of Peranakan family life. The traditional elements of a Baba house are rare in modern-day Singapore, although they can still be easily found in terraced houses in Malacca today.

The houses of the Peranakans up to the time of the Pacific War were the settings in which the most important social, cultural, and religious values of the community were articulated. Religious ceremonies, births, deaths, marriages, and anniversaries were all solemnised or celebrated in the house. The wealthy Peranakans took the lead in the lavish enactment of these rituals, which they observed strictly, despite the fact that other Chinese communities, influenced by the tide of modernisation and revolution sweeping China from the late nineteenth century, were gradually abandoning such practices.

An indication of the extravagance of the Peranakans in Malacca can be found in the descriptions of the travel writer Isabella Bird, who noted that ‘they buy or build these handsome houses, as well as large bungalows in the neighbouring coco-groves, own their plantations up the country, and have obtained the finest site on the hill behind the town for their stately tombs…They have fashioned their dwellings upon the model of those in Canton, but whereas cogent reasons compel the rich Chinaman at home to conceal the evidence of his wealth, he glories in displaying it under the security of British rule.’

One victim of the Babas’ campaign to lead the Chinese community in British Malaya was the loss of literacy in Chinese as the younger generation became schooled in English. The practice of traditions developed greater importance and were held on to more tightly, as they became the only link of a community to its heritage, especially against the alienating backdrop of rapid cultural changes in modern mainland China.

These strange anachronisms, typical in expatriate communities throughout history, are a feature of Peranakan culture. At the same time, contact with the colonial rulers exposed the ambitious community to the similarly revolutionary changes in Western culture, which the Peranakans assimilated more readily. While observing every detail of the laborious, anachronistic twelve-day wedding ceremony, for example, the Peranakans were also among the first to be seen in automobiles and to fly in aeroplanes. This juxtaposition of old Chinese and ‘new’ Western is most evident in the houses of the Peranakans and in their lifestyle.

This spirit remained until the Second World War, which set into motion great political and economic changes and the subsequent decline in the influence, wealth and prestige of the Peranakans. One of the primary casualties of change in the post-war period was the decline of ancestor worship. Dwindling family fortunes and changes in religion were partly to blame. As the most important element in a traditional Peranakan house had been the ancestral shrine, the use and function of the homes of Peranakans likewise evolved to suit the times. Today, with the deluge of cross-cultural influences in Singapore and Malaysia, Peranakan culture seems to have lost its place in modern life, and it remains to be seen if the younger generation can redefine its identity and reassert its relevance.